Vancouver's Low Levels somehow successfully capture the angst of 60's garage rock, the sharp guitar angularity of post punk, the vulnerability of power pop and the snotty temperament of punk rock to create some truly explosive music.  With so much floating around on the internet these days and new bands forming what seems like every hour on the hour, its tough to create memorable music, songs that are going to stand out from the vast ocean of drums and guitars.  Not only that but constructing a tune that's going to actually stick to peoples brains instead of just wash off as soon as a new melody comes along is also far easier said than done.  Low Levels have managed to do all of this and if there was ever a band to keep an eye on, it's these captivating Canadian rogues.

Please introduce yourself (or selves) and tell me what everyone does in the band:
BYRON: Hi, I'm Byron, I play drums. Al plays guitar and sings and Emily plays bass and sings. I sing a song now and again live but not on the EP that came out this spring.

How did you all meet and decide to play music together?
BYRON: Al rang me up one afternoon and asked if I wanted to start a new project with him. He said he had a bassist in mind already, I figured he wanted me to play guitar (I always totally admired his drumming). But I agreed none the less when he suggested that I pick up the sticks. I met Emily at our first practice, not only did we share a ton in common she was a fantastic bass player. Since then it's been great, we work hard and have a great time.

Tell me about what it’s like playing shows in your town.  Is there a community that you feel gets what your band is doing musically?
BYRON: Playing shows in Vancouver is great, folks come out, there is no travel time, and I don't have to sleep on somebody's floor at the end of the night.
Kidding aside, there have always been folks in Van that love to go out to see bands and I think they "get" us. We are not reinventing the wheel, we are just doing it our way.

Can you remember what band or musician first inspired you to want to pick up an instrument and learn to play and/or write music?
BYRON:  I tried so hard to like the music that my friends listened to growing up Iron Maiden  and MC Hammer and other things of the sort. But I was one of those kids that saw Teen Spirit on the old MM and was hooked. I always loved the Beatles and Kiss's music and the whole Nirvana thing showed me how to do it myself....and then smash all the gear. IRRESISTIBLE!!

In your experience, what have been some of the best and worst parts about being in a band?  Is it totally different than what you imagined as a kid?
BYRON: When I was a kid there wasn't internet so bands were in a whole different space, they were outcasts and freaks. Now it's this normal thing that everyone's brother or sister or uncle is involved in.  The best part about being in a band is that I feel inclusion and appreciation.
The worst part is no matter how hard I try I can't quit smoking. I know that seems like a fragmented answer but I think a lot of musicians will understand. 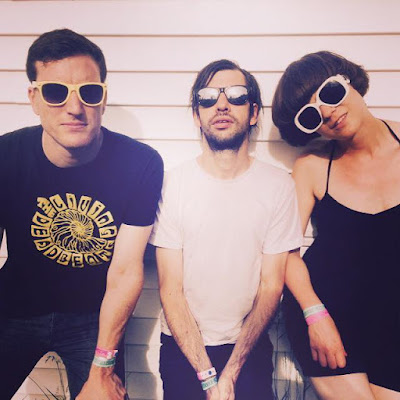 What other bands do you feel people need to hear in order to better understand your music?
BYRON: We all love the Ramones and DeerHoof, so, listen to those two I guess.

What’s your favorite part of making music: the writing process, the recording,  or performing in front of a crowd?
BYRON: All three are so important and I enjoy them for their different reasons. Right now I love the process of recording because it's the one I do for the least amount of time and it's the sound that folks will hear representing you as long as they are listening to it. It's always fun tracking knowing that it will be the finalized "finished" version of the song ....most likely.

What music do you own or listen to frequently that you feel a typical fan of yours may be surprised you enjoy?
BYRON:  I'm a big Jazz fan, I know how that must sound pretentious these days, but really no joke, 60's avant-garde, that's my bag.

Never mind the critics, what in your opinion has been your band’s most shining moment so far?
BYRON: These great videos BRBR did for our band, Thanks Guys!!!

Do you ever feel like underground culture meant more to past generations that had to actually invest time and money into going to shows and record stores to discover new music as opposed to just using Google and Youtube on their phones?
BYRON: Perhaps underground music culture is less based around music these days? I have found people who like underground music, but they seem to want to talk more about Game Of Thrones more.

What is the best way people can hear and get a hold of your music?
BYRON: On line. Look us up. We are on the FB and the Bandcamp. Hopefully we'll be coming to a venue near you soon.


BYRON: Tour this June, summer shows and then we are slated to record our first full length LP this Fall!!!

Posted by Audio Ammunition at 7:06 AM