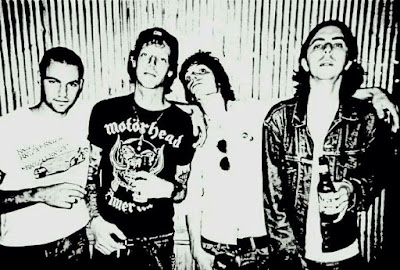 Chicago's Poison Boys play a style of rock n roll that never gets tiresome, always seems to stay relevant and somehow transcends generations all across the globe.  People like Johnny Thunders, Michael Monroe, Stiv Bators and Marc Bolan touched on a particular area of the brain that every adolescent can relate to and awakens it in those that now see those years in the rear view mirror.  Like the people mentioned above Poison Boys take good old fashioned rock n roll and add despair, sexual frustration and  hostility to create a volatile mixture that stings a bit going down, but feels warm once it's in your gullet, The band recently released their gloriously loud and messy masterpiece of a debut on the famed No Front Teeth recording label in London.

Please introduce yourself (or selves) and tell me what everyone does in the band:
MATT: Hi I'm Matt and I play guitar and sing. Andy plays the drums and Adam plays the bass

How did you all meet and decide to play music together?
MATT: We met through being in various bands in our teenage years and playing shows together or just bumping into each other at shows. Adam and Andy used to play in a powerpop band called Scoundrel and I used to go to their shows a lot. They both played guitar in that band so I didn't even know Andy played drums until a mutual friend told me when I brought up that I was looking for a drummer for this band to get started. Later when we were looking for a bassist Andy recommended his old band mate Adam and it worked out perfectly.

Tell me about what it’s like playing shows in your town.  Is there a community that you feel gets what your band is doing musically?
MATT: There's definitely a rock and roll community in Chicago. The punk scene is a little separated from the rock and roll scene which I believe is because there is more garage rock type bands than punk bands in the city. It seems like when we play punk shows the kids aren't as interested while the more rock and roll oriented crowds are much more receptive to what we're doing.

Can you remember what band or musician first inspired you to want to pick up an instrument and learn to play and/or write music?
MATT: Ramones, Dead Boys, New York Dolls, The Riffs and Chuck Berry.

In your experience, what have been some of the best and worst parts about being in a band?  Is it totally different than what you imagined as a kid?
MATT: Worst parts: not being able to go to someone's garage and jam every day for hours like when we were teenagers.  Best parts: playing live, seeing people get into the music at shows, hearing the feedback from people who love our music. We just want to be a band people put on and sing along to when they want to feel inspired or listen to something they really really enjoy.

What’s your favorite part of making music: the writing process, the recording,  or performing in front of a crowd?
MATT: All of it is fun and rewarding.  The best part, for me at least is playing live to crowds that seem to be really enjoying it. It's really exciting knowing you've written the songs or that you're playing the songs and people dig it enough to where the music is moving them around, that's cool.

What music do you own or listen to frequently that you feel a typical fan of yours may be surprised you enjoy?
MATT: Well we all nerd out pretty hard on Delta blues and Chicago blues musicians. Not sure if that is surprising to anyone but we love that stuff big time. Big Bill Broonzy, Lightnin', Robert Johnson, Mr. McTell, Jimmy Rogers, Howlin' Wolf, etc.

Never mind the critics, what in your opinion has been your band’s most shining moment so far?
MATT: Our record release for "Headed for Disaster" was the best show we've done so far. Super packed show at Cole's and it seems everyone we knew came out of the woodwork for that one. Definitely an awesome night. 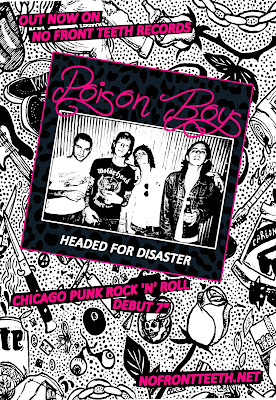 Do you ever feel like underground culture meant more to past generations that had to actually invest time and money into going to shows and record stores to discover new music as opposed to just using Google and Youtube on their phones?
MATT: I personally do. I think saving up and daydreaming about how exciting it will be to hold the physical record sleeve in your hands and putting the needle on the record, and then going out to the store the day it's released or when you finally have the money for it, is much more rewarding than just clicking someone's Bandcamp link and hearing their new record for a few seconds through phone or laptop speakers.

What is the best way people can hear and get a hold of your music?
Our 7" is currently available through Nofrontteeth.co.uk, or at our shows. We'll get a webstore up where you could purchase it directly from us in the next few months at some point. You can also hear it at poisonboys.bandcamp.com, but again physical copies are always better.

What lies ahead for the band in 2016?
MATT:  We have a follow-up 7" in the works. Can't say much more about it yet until it's getting ready for release!! Stay tuned rock and roll people!!!

Posted by Audio Ammunition at 12:50 PM