The Not Amused: Mod Swagger With Punk Passion 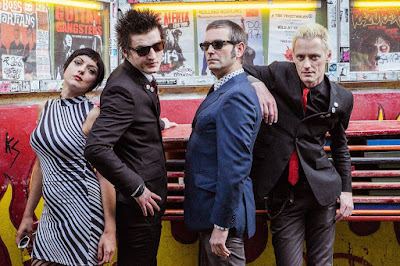 Out of all the music that flows in and out of my hollow head, there are few genres that instantly cause my cynical ear to point up; 70's flavored punk usually does the trick. There's something about that music from that particular time period that's teaming with anxiety, restlessness and a whole host of other raw human emotions.  Not to mention just the way it was recorded back then; the guitars sounded like power tools sawing flesh and the drums sounded like they were beating right on to your skull. With all the vigor punk music had then, most of the bands (the good ones anyway) didn't forget the importance of hooks and melodies.  Bands like The Jam, Teenage Head, Generation X, and The Undertones were prime examples of this.  Now fast forward to 2016 and in walk Berlin's The Not Amused, fishing from the same pond as the bands mentioned above but adding their own elements to the music that can only be found in the fuss and fluster of living life in the 21st century. So now there's a whole new breed of beast to contend with, which is every bit as formidable as before if not more so.

Who is currently in the band and what does everyone do in it?
KIDNAP: Current lineup is Sir Harris XLV on vocals, Rosa Riot on drums, Shockhead on Bass and me, Kidnap on guitar.

How did you all meet and decide to play music together?
KIDNAP: We first met in 2004 when Sir Harris and our former bass player Hansi asked me to join their 60’s Garage Trash project. I told them, that I'd pretty much prefer late 70s obscure Power Pop, Punk and Mod Revival. And that's how it all started.

What band or musician first inspired you to want to pick up an instrument and learn to play and/or write music?
KIDNAP: I started to spend all my money on records in my early teens, so there've been lots of influences, mostly Punk Rock bands. I bought the 2nd album by the Guttersnipes from Glasgow when it got out and instantly fell in love with the 1st track “Already There”. Those sharp, fast, tight and catchy rhythm guitars made me take one of my first few guitar lessons! (Sadly their singer passed away earlier this year)

How would you describe your band to your grandparents?
KIDNAP: Loud & fast Rock 'n' Roll (since that's probably the only music aside from German 'Schlager' and Folk music they could have had an idea of what I was talking about)

What sorts of things do you typically enjoy writing songs about?
KIDNAP: Our songs are about death (Hit By A Bus, Bazooka), getting beaten up (Bovverbaby), love (Ethel, Watching You) and also politics (Little War, Burn ’em Down), not to forget the Royals. We started the band with the intention to write teenage songs without a special meaning like most of those old Power Pop bands did, but writing about girls and cars got us bored pretty soon.

I’ve heard people say that playing and writing music is therapeutic to them.  Have you ever found this to be true?
KIDNAP: Absolutely! I'd have gone completely nuts if there weren’t any bands in my life. Sometimes it can drive you mad, if you've got to cancel a show at the very last moment because somebody in the band forgot to tell you that he's on holiday and didn't have the show in mind that you've been planning for months, but on the other hand there couldn't be anything better after a hard day at the office (those days we all try to avoid badly!!!) than turning up your amp and have some drinks together at the rehearsal.

Does it annoy you or distract you at all to see some of your audience members fondling their phones while you’re up on stage performing?
KIDNAP: I hate it! If you're on stage, drenched in sweat trying to entertain your audience and give the best you can while certain people seem to be more interested in their Facebook chat sucks.  I'd really prefer those guys to piss off and even would pay them back their entry.

After one of your shows, what sort of feeling or sentiment do you hope your audience walks away with?
KIDNAP: A smile on people's faces is the best payment a band could get. All we want is to have a good time and if the people coming to our shows are having a great night out, it couldn't be any better.

What is your favorite album to listen to from start to finish?
KIDNAP: It changes from time to time, but one record I'm never getting tired of spinning is Let Your Fingers Do the Talking by Billy Karloff & The Extremes. If you'll ask me tomorrow it might be a different one.

What’s the best advice anyone has ever given you that you still follow to this day?
KIDNAP: Linse, singer of the Bad News, once told me that you can only do a good show if you do it for yourself in the first place no matter if you play to either 2 or 200 people. That's what I keep in mind every time I enter the stage.

What is the best way people can hear and get a hold of your music?
KIDNAP: Music should be affordable for everyone so our first 2 releases are available for free at thenotamused.bandcamp.com. Of course we're very happy if people buy our records as well since we're pretty much a DIY band and so a little support helps to keep it going.

What lies ahead for the band in 2016?
KIDNAP: There'll finally be new records! An 8-Track 12” and a 7” that will hopefully be released this summer! And maybe there'll be another tour in Spain in late summer.

Posted by Audio Ammunition at 7:41 AM