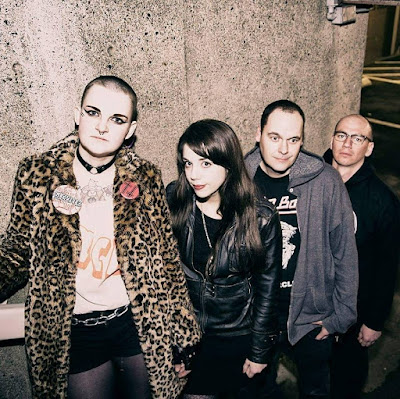 I don't listen to a lot of new hardcore punk bands.  The new stuff I do like has to have at least a toe hold in the early 80's like Berlin's Dysnea Boys, the Bay Area's Neighborhood Brats or Seattle's Sick Ward.  Most of it to me either sounds contrived or just pandering to a bunch of sweaty, ignorant tough guys.  I didn't get any of that from Portland's Macho Boys.  They're a fairly new band that consists of members of Low Culture and Piss Test. They're so new in fact that they only have a six song Demo out but those six songs was all it took to win me over.  These songs are a lit powder keg of snake venom and extreme vexation with the fuse burning nearly to it's end. The music is stripped down to it's bare essentials to reduce air resistance and maximize the blunt force in which it hits your guts with.  Their songs sound well rooted, the band seems focused, driven and impassioned by their music. To me, those are the key ingredients to a good hardcore band, or any band for that matter.  Sure it sounds simple, but it's far easier said than done.

Please introduce yourselves and tell me what everyone does in the band:
TEKIAH: I'm Tekiah, I sing.

How did you all meet and decide to play music together?
TEKIAH: I ran into Samantha at a show and mentioned I wanted to sing in a hardcore band and she was like "oh my friend Chris wants to play music like that let me find him!" I met Chris, then Samantha made a date for us to have our first practice. While we were talking I found out Sam was going to drum, which was funny because we work together. I was really nervous at first because I've never been in a band before but the first practice went really well.

CHRIS: Yeah, Samantha asked something like “Hey Chris, when are you going to start a hardcore band now that you live in Portland?” And I said “Whenever someone asks me.” So she introduced me to Tekiah and said “we’re all in a band now.” Then we took shots.

Tell me about what it’s like playing shows in your town.  Is there a community that you feel gets what your band is doing musically?
TEKIAH: For the most part playing shows in Portland is awesome. There are so many rad bands that come through and that are from here. The only thing I don't like is how little people move. It's really weird to play a full show and look at the crowd and everyone's just staring at you. I think the community here gets us and wants us to play and that's a really good feeling.

CHRIS: I agree that Portland is a great place to be in a band. It is also true that not a lot of people move when bands play, but I’m usually in the back with my arms crossed (totally enjoying myself!) so I’d feel a bit hypocritical complaining about that.

SAM: Yeah; what they said.

Can you remember what band or musician first inspired you to want to pick up an instrument and learn to play and/or write music?
TEKIAH: The Ramones without a doubt. I remember the first time I heard them and was like oh shit I want to do this!!

CHRIS: When I was a kid I totally used to strap my dad’s guitar around my neck and pretend I was in the Beach Boys. Then in my early adolescence, there were plenty of DIY punk bands that helped me realize that writing songs, playing in bands, releasing records, and touring wasn’t just a pipe dream.

SAMANTHA: Portland band The Stops inspired me to make the jump from fan to band. You’ve got to get their LP on Dirt Cult Records, or Sabotage Records if you’re in Europe. They are amazing.

SAM: Music has been a part of my life since middle school band (I played the Clarinet); I've always wanted to be in a 'Cool' band.  Although, given how much I was into church and god at that time 'Cool' was probably a Christian ska band. 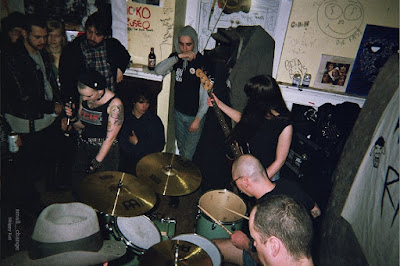 CHRIS: I’d say the best part of playing in bands is that it’s allowed me to see all sorts of places and meet all sorts of people that I might not have otherwise. The worst part is loading equipment up and down stairs constantly.

SAMANTHA: I like working toward shared goals with bandmates, getting new people into playing, and playing in other cities. I get bummed when I play a show and the majority of the bands on the bill are all guys, or if someone asks if I’m the merch girl, or assumes that a guy helping me load my gear is in the band and I’m there to help, etc.

What other bands do you feel people need to hear in order to better understand your music?
TEKIAH: Other femme hardcore bands for sure like G.L.O.S.S., I.C.E., Heavy Hands, and Firewalker.

What’s your favorite part of making music: the writing process, the recording, or performing in front of a crowd?
TEKIAH: I love writing new songs. It's so cool to hear the finished product and think, wow we made this together.

What music do you own or listen to frequently that you feel a typical fan of yours may be surprised you enjoy?
TEKIAH: I listed to a lot of do wop like the Shirelles, the Chantels and the Supremes.

SAM: Country/Bluegrass (Clifton Hicks, The Stanley Brothers, Stringbean, Dwight Yoakam); anything that Buddy Rich has been a part of.

Never mind the critics, what in your opinion has been your band’s most shining moment so far?
TEKIAH: Definitely our benefit for the Network for Reproductive Options. Samantha and I booked that show together and it had a really good turnout. All the bands were rad.

SAMANTHA: The show made over $500 for abortion access. We were fundraising as part of a nationwide event to raise funds for organizations that help people pay for abortion when they don’t have enough money or health insurance. There was a punk team called Pick Your Kingpin. 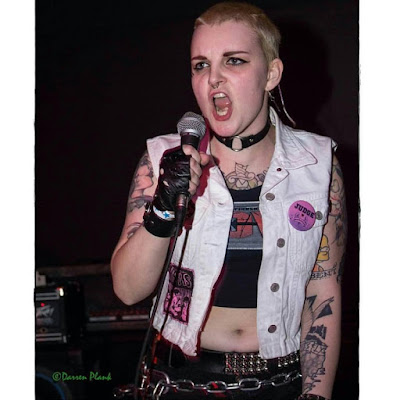 Do you ever feel like underground culture meant more to past generations that had to actually invest time and money into going to shows and record stores to discover new music as opposed to just using Google and Youtube on their phones?
TEKIAH: I think it still means just as much. Having the internet just means you can actually listen to a record before buying it instead of thinking the cover looks cool and buying it.

CHRIS: People spend too much time pining for “the good old days” I think nostalgia can be a destructive force that keeps people from living in the moment and/or moving forward. In regards to how people consume music, I mean sure, I look back fondly on the days that I had to pick up a record based solely on a recommendation, review, and whether or not the cover looked “cool.” But I also ended up with a stack of shitty fucking records as a result.

SAMANTHA: No. It’s great that people can access music really quickly. Maximum RocknRoll is undertaking the project of digitalizing their massive vinyl archive and creating a searchable database of the collection and music reviews. Having music online helps it be accessible. Not everyone can afford to buy an obscure, old, out of print $300 7”, and not everyone wants to. You can donate to the MRR archive project here: http://bit.ly/1VSIHzN.

What is the best way people can hear and get a hold of your music?
TEKIAH: Machoboys.bandcamp.com, you can buy our demo tape through there.

What lies ahead for the band in 2016?
TEKIAH: We're going on a short tour to California at the end of August and trying to record another demo tape. I've never been on tour so I can't wait!!!

Posted by Audio Ammunition at 8:02 AM