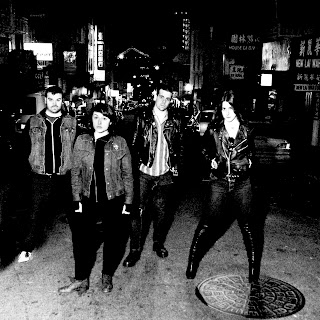 Where is the band from?
Neighborhood Brats started in San Francisco, CA. However, now I live in LA, Jenny is moving back to LA, Jasmine lives in Oakland and Kirk is talking about a move to NYC.

Who is in the band and what instrument do they play?
Jenny Angelillo - vocals
Kirk Podell - drums
Jasmine Watson - bass
George Rager -guitar

How did the band start?
I ran into Jenny at a Spits show in mid 2009. I didn’t really know her, but we had/have mutual friends in both SoCal and SF. I asked her “What are you doing now?” and she replied, in a super snotty voice, “I’m retired.” I had seen her old band The Orphans at least a couple times, so immediately I knew what needed to happen. Not taking the retirement proclamation as an acceptable answer, I called bullshit and we traded numbers. We texted back and forth literally every 2 minutes for about a week - mostly about the funny, sketchy shit we saw and did around San Francisco. That’s how we started forming ideas for songs, some of which we still play to this day.

Jenny initially wanted to play bass, so I had to talk her out of that by getting our friend Andrei Bouzikov from Deadfall to play. Soon after that, we solidified the initial lineup of our first band, Roofie & the Nightstalker. That band was the prototype for Neighborhood Brats. After a bunch of local shows and a weekend tour down to LA, Andrei left the band to concentrate on his artwork. We started having problems with the lineup after we replaced him, but we were getting asked to play all the time and had recorded the “GHB” 7” for Rich Bitch Records, so Jenny and I soldiered on.

Around the same time, I had been partying with Kirk in the Mission District a lot and had just set him up with Jason Halal from 86 Mentality to start playing in Neo Cons with Jasmine and Marc Gonya. That’s around the time I met Jasmine, too. I used to let her in the gate outside of our super sketchy lockout compound in the Tenderloin part of San Francisco. She never had a key to get in and the block we were on was where the crack dealers sold their wares. It was really sketchy. Anyway, I thought she was super cool and wanted to play in a band with her someday. I knew Jenny would like her, too.

By July 2010, playing in Roofie & the Nightstalker had become a really hairy situation for Jenny and me. We needed to distance ourselves from increasingly weird behavior by one dude in particular that was getting out of control. Another guy couldn’t remember our songs to save his life. So basically, we cancelled our remaining shows, quit Roofie & the Nightstalker and after a short mental health break, started Neighborhood Brats with Kirk and Jasmine. We recorded the first Neighborhood Brats EP right after Christmas in 2010 after 5 practices, before we even played a show.

How did the band initially hook up with Modern Action?
I don’t really remember how we met them initially. I’m a fan of the Briefs and the Bodies, so naturally I was all “fuck yeah” about it when they asked us to do a record. They were set to release a Roofie & the Nightstalker record - a Lurking the Loin single I think. However, when shit went south with that band, we canceled that record. In doing so, we promised them we would re-record “Lurking the Loin” and “Fast & Loose” plus other tracks with the new band. Johnny from Modern Action was skeptical at first, but we totally pulled it off. In fact, the Neighborhood Brats versions are superior in a lot of ways because we sound way stoked to be playing, like a big weight had just been lifted off our shoulders.

50 years ago people used to buy music and get their water for free, now people pay for water and get their music for free. Do you think this affects music in any way?
The internet is great for DIY artists because any band can be heard on-demand and any band can immediately have worldwide presence. That also means that people now have to sift through a lot of crappy bands to find the gems, but they can do so without committing to a purchase. The true fans tend to buy the vinyl and somehow acquire the digital, which is fine by me. The business of digital delivery seems to be evolving with the advent of websites like Bandcamp where you can sell vinyl and downloads in one party package. I’m a big fan of convenience; I’m an 80’s kid that grew up with a tape deck and a turntable. Having the ability to make music portable and sharable is a crucial part of being into any type of music, especially punk rock.

Neighborhood Brats have influences of both northern and southern California. Was this a conscious decision in the songwriting?
It was never a conscious decision. Our sound is a direct result of our influences. If it were a conscious decision, we would probably sound more generic. I feel that when dudes say, “I’m going to start a band that sounds like _______,”  and you end up being a second-rate imitation of the original.

I play how I play, which is partially why our songs sound the way they do. I grew up listening to old rock n roll, surf and hardcore/punk, a lot of it from California. I’m hopelessly addicted to down picking, which defines my style and puts the brakes on experimentation. I don’t like wanky or noodly guitar solos. I have riffs going on inside my head most of the time; I can’t help what comes out. I’ll be the first to admit that all punk rock is derivative... but you have to have your own flair, style or whatever to pull it off as your own, which I feel that Neighborhood Brats does. Punk rock is not rocket science. Chemistry, maybe... but definitely not rocket science.

How was Awesome Fest?
It was totally rad, err, I mean awesome! Everyone at our show was super fun. The crowds at the other shows we went to were super cool. We were stoked to play with the Marked Men! There was a P.A. problem during our set, so a bunch of people was complaining they couldn’t hear Jenny. We didn’t want to derail the show, so we just kind of kept going and it eventually got fixed. We are used to playing house shows, DIY spaces and the like, so when something doesn’t work, we’re like “fuck it” and we keep playing out of habit. On a personal side note, it was a nice change of pace to play a bigger show where the crowd wasn’t a predominantly hardcore crowd. While we always have a blast playing with HC bands, it is nice to branch out a little bit and still keep it DIY.

You guys have an EP and a couple of 7 inches. Are there any plans for an LP anytime soon?
I have several songs written that could be part of a Neighborhood Brats LP. Once Jenny is back in LA, I’m going to start writing an LP with her. There are some really good inside jokes and stories about shitty people that need to be songs. Some songs I write completely on my own, but Jenny and I write really well together. It makes the process more fun and the songs turn out better when we work together. Same for when I write with Kirk and Jasmine. Kirk and I can sit down randomly and pound out 4 songs in 15 minutes, all keepers.

On the other hand, our self-titled EP is almost sold out and the We Own the Night 7” is sold out. Our third release, Ocean Beach Party is already moving pretty well and I haven’t even gotten the records yet. We might just record a couple remaining songs from our current set, compile everything together with some unreleased tracks we’ve been sitting on, re-master it all and release that into the space-time continuum as the first LP.

Where can people hear the band?
neighborhoodbrats.bandcamp.com
We’re also on a bunch of other sites. Just Google Neighborhood Brats.

What’s next?
Everyone in Neighborhood Brats is busy as shit right now. My short list: Pacific NW tour, Southern US party/tour with our buddy Bobby Egger tour managing and after we release an LP, we want to hit Europe.

Posted by Audio Ammunition at 11:45 PM No comments: 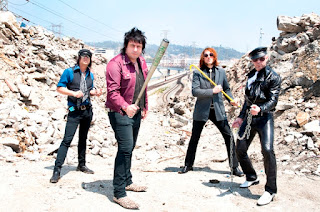