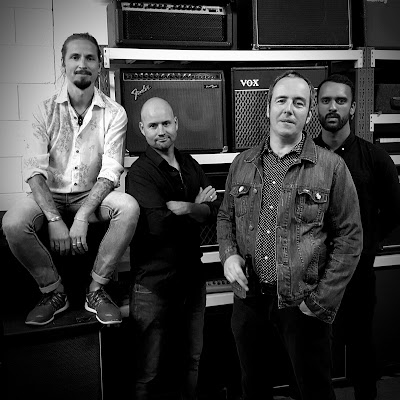 One of my favorite parts of having a blog is getting to hear so many fantastic bands I probably wouldn't get to hear otherwise.  Magnificent groups from all around the planet send us their music they've released themselves.  This may sound daft, but one of the reasons I love digging deep into independent labels and self released records is because I'm afraid of missing something exciting somewhere.  In some dimly lit corner of the globe, something extraordinary is going on and I want to catch it before it blows out.  I don't trust stuffy old men in expensive suits working for entertainment corporations to do this for me.  I learned long ago that this is something I have to do myself.  Case in point: Auckland, New Zealand's Thee Rum Coves who rose from the rubble of  rock n roll maniacs The D4.  These guys take 60's Mod R&B, 77 Punk, pour gasoline all over it then light it on fire and don't stop until everyone in the room is hot footing it all over the place.  This is why Audio Ammunition exists; to shine a light on amazing, hard working bands that deserve your attention and Thee Rum Coves are most certainly that.

Who is currently in the band and what does everyone do in it?
JAKE: We’ve just had a couple of changes in the lineup recently with a new drummer coming on board and Kendall leaving to go and do her own solo work. We’re back to a four piece with Jake Vox/ Guitar, Tomas Guitar, Jimmy Bass and Treye on Drums.

How did you all meet and decide to play music together?
JAKE: Jimmy and I played together in the early days of the D4 for a couple of years before I headed back to the UK from NZ. When I came back to NZ a few years later I started the band with Jono, the former drummer, and the universe put us in touch with Tomas, who’d just arrived from Chile… total cosmic alignment, man. Then the original bass player quit to move away and it was a natural move to get Jimmy in, who was looking to get into a band where he could just turn up and plonk away on the bass. Treye works with Tomas so we have two barista in the band, so if you ever want a kick ass coffee, come see us.

What band or musician first inspired you to want to pick up an instrument and learn to play and/or write music?
JAKE: I learned to play guitar playing along to It’s Alive by The Ramones, the perfect textbook for any budding guitar player, bass player or drummer! I also loved the Clash as a kid, they were from my part of West London and I loved everything about them; their politics, perfect front man, guitar slinger and bass player. From then on it was all about these –
-          The Clash, The Damned, The Buzzcocks
-          The Stooges, MC5, New York Dolls
-          The Kinks, Small Faces, The Who
-          The Saints, Radio Birdman, Celibate Rifles

How would you describe you band to your grandparents?
JAKE: I’d have to dig them up first.

What sorts of things do you typically enjoy writing songs about?
JAKE: Girls and cars. Well, girls. I’d love to be able to articulate my politics but it always comes back to girls and relationships. Some real, some imagined.  Oh, and a bit of mental illness.

I’ve heard people say that playing and writing music is therapeutic to them.  Have you ever found this to be true?
JAKE: Absolutely. Playing music certainly is. Having a guitar to hand is the best way for me to relax. There’s no better social interaction than hanging out and jamming with people, creating something from nothing, literally pulling something from the ether. When you’ve got some likeminded people together and you can shift the dynamic or move the song along with a look or a nod, then you know you’re somewhere pretty good.

Writing songs can be the opposite of therapeutic though, particularly when it just isn’t working. It can be the most frustrating thing. And then sometimes songs pop fully formed into your head and it’s the easiest thing in the world.

Does it annoy you or distract you at all to see some of your audience members fondling their phones while you’re up on stage performing?
JAKE: I never notice. I’m too busy trying to remember the words, stop my fingers cramping, avoiding breaking my teeth on the mic or ducking Tomi kicking me in the head.

After one of your shows, what sort of feeling or sentiment do you hope your audience walks away with?
JAKE: I hope their feet hurt from dancing. I hope they’re humming our tunes. I hope they feel like they’ve just seen the best band around….. and I hope they are asking themselves exactly who that god-damned hot singer was, although in all likelihood they’ll be staring starry eyed at Tomi.

What is your favorite album to listen to from start to finish?
JAKE: Too many to mention but to pick one – Radios Appear by Radio Birdman. One of the greatest and most under-appreciated albums ever.

What’s the best advice anyone has ever given you that you still follow to this day?
JAKE: Two pieces of quality advice: 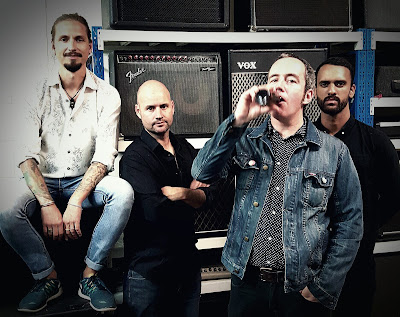 What is the best way people can hear and get a hold of your music?
JAKE: We’ve just signed a distribution deal with Aeroplane Music so you should be able to source our stuff here soon http://www.aeroplanemusic.co.nz/ or you can go to our own Bandcamp site here https://theerumcoves.bandcamp.com/. People can contact us through Facebook too: https://www.facebook.com/Thee-Rum-Coves

What lies ahead for the band in 2016?
JAKE: Lots of shows around NZ. Get some recording done. We’re planning on doing a couple of EPs in short succession and trying to get them both out this year. Then looking for shows in Australia and the rest of the world!

Posted by Audio Ammunition at 6:16 AM