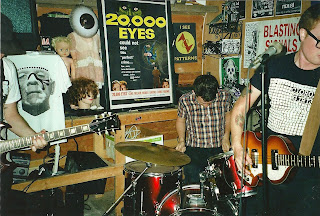 Canada’s Corner Boys are in love with ‘70’s punk and power-pop. The band pulls, most notably, from Irish bands like Protex and Rudi, but adding in Simpletones energy and a love of obscure one-release wonders. Corner Boys, like the boys dealing in The Wire, will be hanging around your brain long after listening to their brand of infectious power-pop.

Who’s answering the questions?
This is Patrick Bertrand.

Who is in the band and what instrument do they play?
There’s three of us. I play drums, Joel Butler plays bass, and Wade Connor plays guitar. We all sing, but I sing lead most of the time.

Give us the band’s origin story, some other bands the members have played in and currently do play in?
Corner Boys started in spring 2016 when Wade asked me to play drums with him. I hadn’t played drums in more than 5 years at that point so it was kind of like learning from scratch again. We wrote together with a few bass players and singers but nothing ever felt right, so Wade and I practiced as a two-piece for most of the first few months. Joel Butler “retired” from music after his previous band Nervous Talk ( https://hoseheadrecords.bandcamp.com/album/nervous-talk-2 ) broke up, but it only took me six months of bugging him to play bass with us until he finally agreed in November 2016. We played our first show in January 2017.

Where did the band name Corner Boys? Is the band name from the book, Corner Boys?
A corner boy is a troublemaker. It’s old slang for someone loitering, usually up to no
good. It’s in the song Rat Trap by The Boomtown Rats
( https://www.youtube.com/watch?v=024UcB1m7Do ).

What bands did you have in mind when starting this band?
We all love late 1970’s punk and power pop bands that released one 7” then faded into obscurity. At our first show, we covered The Speedies - Let Me Take Your Photo, and The Simpletones - TV Love. Add Protex and Rudi to that mix and those were the reference points we had from the start.

In a previous interview, the band stated “First wave Canada will always have a
place in my heart, but no one played power pop in the ‘70’s better than the Irish.” What makes Irish power-pop/punk so special?
Whenever I read about the troubles in Ireland I’m blown away by the fact that a bunch of kids could write love songs as well as they did. I think there’s a kinship between countries like Ireland and Canada. We’re both stuck beside influential countries that have all the spotlight. We’re defined more by not being something than what we are. It’s a terminal uncool that I think levels the playing field for people to write music. Check out releases on Good Vibrations Records and Rip Off Records both from Northern Ireland.

Corner Boys seemed to get noticed due to the original demo that was posted on Bandcamp. So, did Drunken Sailor approach the band about putting out the debut 7” or was the band sending the demo to labels?
We put the demo up on Bandcamp and posted about it a bit on social media. It had pretty good legs and a few labels reached out to us, but they wanted us to pay to press it as a 7” on their label. Julian at Drunken Sailor reached out a bit later and asked if we were going to record more, because he wanted to hear it if we did. We did another session with Jeffrey McCloy (Tranzmitors, Fashionism) and sent the tracks to Julian, and that became the Just Don’t Care 7”. The demo did eventually come out as a tape through Flo at Trapdoor Tourz in Germany.

How you the band hook up with Dirt Cult?
I’ve known Chris and Lizzie at Dirt Cult for a few years through doing my own label
Hosehead Records. Chris got a hold of me a few days after Drunken Sailor did and asked to do a 7” as well. Rather than do a split release we decided to do two 7”s. The next batch of songs became the Love Tourist 7”.

With a zillion digital avenues presented to musicians nowadays (Bandcamp, blogs, Spotify, YouTube, etc.) what do you feel are the best parts and worst parts of these digital avenues?
You can listen to anything at absolutely any time. It’s an ultimate convenience that makes it impossible to make any waves. 99% of the time when I listen to music it’s on vinyl at home. Unless it’s a super rare KBD single and I can’t afford it, then I just listen to it at Josh from Chain Whip’s house.

What are some the band’s favorite shows they have played?
We recently played a show with Mike Krol and Swearin’ and that was a really good time. We all like playing in Victoria, BC, which we’ve done twice now. Our US shows have been a lot of fun as well, Portland and Seattle. I’d like to play more down there.

When not playing music, what does the band like to do?
We’re usually watching old horror and sci-fi and challenging each other to eat really spicy things. We all ride bicycles a lot too.

Where can people hear the band?
All our stuff is on Bandcamp first and foremost, but also iTunes, Spotify, and possibly Youtube. If you like it, please support Dirt Cult Records in Portland, or Drunken Sailor Records in the UK by buying it on vinyl.
https://dirtcultrecords.wordpress.com/
http://www.drunkensailorrecords.co.uk

Posted by Audio Ammunition at 3:41 AM No comments: