Ottawa's ZEX have worked hard and endured a lot in the name of Rock n' Roll.  They consistently release and record music and tour the globe relentlessly.  The music they play brings to mind British Street Punk bands of the early 80's like Blitz and Sham 69 while the guitars are saluting British Heavy Metal from that same time. Their vocalist Gretchen Steel sings with the power of The Plasmatic's Wendy O. Williams and the passion of The Violator's (UK) Helen Hill.  ZEX seem to be fueled by a genuine passion for expression, truth and freedom very few bands still have in punk music.  This is what sets this band apart from the rest of the studded jackets and patched black jeans. It's also what makes them one of the most relevant and intriguing bands around today.

Please introduce yourself (or selves) and tell me what everyone does in the band:
Gretchen sings, Jo plays guitar, Gab is on the bass and Cody is the current drummer.

How did you all meet and decide to play music together?
JO: My previous band Iron Dogs was making a music video that Gab was filming and editing and Gretchen was an actress in the video so we decided to form a band then. Gretchen and I already had recorded some demo tracks.

GRETCHEN: Jo and I had made the demos for ZEX before we found our other two members and wanted to have a serious band together for a while.

GAB: Jo asked me to play with them after we did a music video for Iron Dogs, he sent me demos and we started jamming 4 days a week, because apparently people do that.

Tell me about what it’s like playing shows in your town.  Is there a community that you feel gets what your band is doing musically?
JO: Certainly not. We are despised in our own city. People are very cliquish and only like 'cool' bands.

GRETCHEN: I've never been popular or understood in my life. So, I'm not surprised my band’s music gets the same treatment.

GAB: It’s cool playing shows in Ottawa, I get to sleep in my own bed and don't have to sit in a van all day. Our last two shows have been super weird though, we played a film festival as the only band and the last show we did was in a pancake restaurant.

Can you remember what band or musician first inspired you to want to pick up an instrument and learn to play and/or write music?
JO: My friend Dez was the first guy I met in high school that wanted to start a band. He actually knew how to play instruments. He is some kind of musical genius, I still play with him to this day.  He approached me and asked me if I wanted to play in a "Death Metal Band". I answered that I didn't know how to play instruments and didn’t know what death metal was. That didn't seem to matter to him.

GRETCHEN: Ever since I was four-years-old I wanted to be in a band. I honestly can't remember how I came to have that dream but I do remember telling my parents when I was four that I wanted to sing in a band.
GAB: I took piano lessons when I was a kid but my teacher never taught me to play cool songs. I don't think I ever associated playing music with the music I listened to when I was a kid. My uncle gave me a Van Halen rip-off guitar when I was really young and I took lessons for about 2 months when I quit playing piano. But I never practiced so my parents took me out of it. When I was 14 I decided that I wanted to learn to play bass because it was easier than guitar and have been playing in stupidly named bands since. Its way easier to tell your grandma that you're playing in a band called Zex than Dick Fister.

In your experience, what have been some of the best and worst parts about being in a band?  Is it totally different than what you imagined as a kid?
JO: Growing up in the DIY scene, I had to learn everything myself from experience. There was and still is a lot of trial and error. I never had rock star delusions. I've always understood what it took to get a band going. Its ridiculous when people ask me "Ohhh you’re in a band and touring!? You must be making a lot of money!"

GRETCHEN: the worst part about being in a band is that now that a lot of people know you/seen you or heard about you, you are now in the line of fire. People criticize as if they invented punk. Every piece of who you are is picked apart and chewed out by these people. I don't know if it's jealousy or that people are just so bored they look for something to hate to get out all their negative energy, you become that punching bag.  As a woman, I've dealt with a lot of that horse shit, I've heard it all. Positive thing about being in a band, you get to make music, express who you are, leave your dent in history and make everyone hate you just for kicks.

GAB: It's weird having to be a public person, you meet all these people for very short periods of time but because of the internet you have to be careful about what you say or if you make a bad first impression. I can't for example complain about a band sucking on the internet now because someone will make a big deal about it. It's kind of a small price to pay to essentially get to travel the world, meet incredible people and see all these awesome bands and experience all these great things. I've met so many different people that have really impacted me in my life and made me look at things differently. 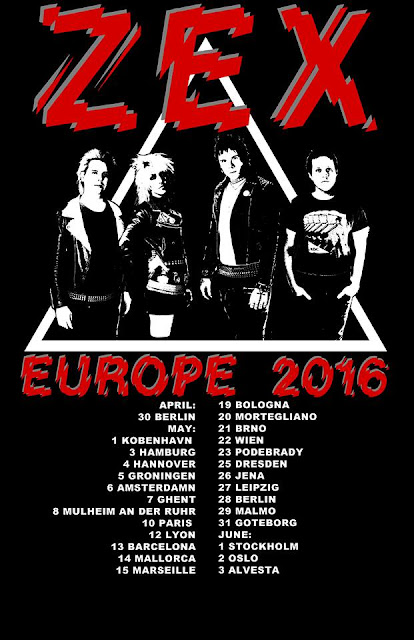 What other bands do you feel people need to hear in order to better understand your music?
JO: Are you asking this to me because you're having a hard time yourself? I think people need to take a step back and for a minute pretend that extreme metal and hardcore punk never happened. Let’s say we were back in those days and wanted music to keep evolving without subscribing to the faster /heavier race that went on in the 80’s and 90’s.

What’s your favorite part of making music: the writing process, the recording, or performing in front of a crowd?
JO: the satisfaction of unwrapping a box of your newest record is a great feeling! It gives you the impression that all your efforts weren’t totally useless. Live gigs are a lot of fun, but it’s only the tip of the ice berg, its 5% of what a band does. Most of being in a band is sitting in front of emails or going to the post office.

GRETCHEN: Performing is my favorite part, its where I finally can break free and be the animal I need to be. I truly love recording too.

GAB: Performing is definitely my favorite thing, maybe I'm just a narcissist but there's no greater feeling than looking out at a crowd of people who are enjoying your art. I work doing film and when you finish a movie it's a really satisfying process but you just don't get that feeling that people actually care about what you made. Having that direct feedback just makes you feel so much more accomplished on a personal level. Also it gives me an opportunity to do awesome stage moves and jump around.

What music do you own or listen to frequently that you feel a typical fan of yours may be surprised you enjoy?
JO: Italo disco, space rock, black metal, Italian prog, power electronics, AOR, rocksteady, reggae, northern soul, girl groups, doo wop, etc..

GRETCHEN: I'm with Jo on the Italian disco!

GAB: I'm completely obsessed with the band NoMeansNo.  Everyone else hates when I put them on but fuck that band's lyrics and the way they write their music is just so original and honest. I'm also a huge fan of novelty music and comedy music. I saw Weird Al twice last year and it was the best show I've ever seen.

Never mind the critics, what in your opinion has been your band’s most shining moment so far?
JO: We've lived in poverty, homelessness and unemployment just to be able to say that we have toured the four corners of the earth. We've played large gigs to hundreds of people and we've played to ten people and acted like we're headlining Madison Square Garden.

GAB: To sort of elaborate on what everyone has been talking about, we've gone through band members angrily quitting the band, our drummer passing away, every possible kind of bad luck in terms of vehicle maintenance, flights fucking up, being sick, arguing amongst ourselves, injuries, weird internet drama, Nazis attacking us, getting electrocuted simultaneously, unbelievably long car rides, and just other personal problems on top of it all. The fact that despite essentially being cursed, we're still touring successfully, travelling the world, and playing our music blows my mind. I think the craziest thing for me still is that I can be on the other end of the planet and someone knows my music.

Do you ever feel like underground culture meant more to past generations that had to actually invest time and money into going to shows and record stores to discover new music as opposed to just using Google and Youtube on their phones?
JO: I still think you can really tell the people who live and breathe underground from the average concert goer. I think it’s strange that its 2016 and people still ask me that in zine interviews. Soon we will be living in a time where no one will remember how it was before the internet age.

GAB: It's great being able to listen to whatever music you want, we're touring right now and have an iPod filled with all hit songs and don't have to fumble over our tape collections. I think the problem is that with the accessibility of free music there's a lot more bands and it's hard to get noticed within it. That being said, you can make a music video now and people will actually see it.

What is the best way people can hear and get a hold of your music?
JO: The internet! What else!?! Well, we do have records, tapes, cd's that are all well distributed. Go to your local record store and get them to order a copy for you if they don't have it in stock. Otherwise, you can be a nerd and order online yourself through countless distributors or even through the band.

What lies ahead for the band in 2016?
JO: Right now we are on tour in Europe all dying from pneumonia. If we survive, we will tour in Japan in September with Malice Panic.

GRETCHEN: JAPAN AND THEN THE WORLD!

GAB: I'm slowly transitioning entirely out of boxers and moving to the much more superior boxer brief. 2017 might see a full brief transition but I don't want to get ahead of myself.

Posted by Audio Ammunition at 5:56 AM