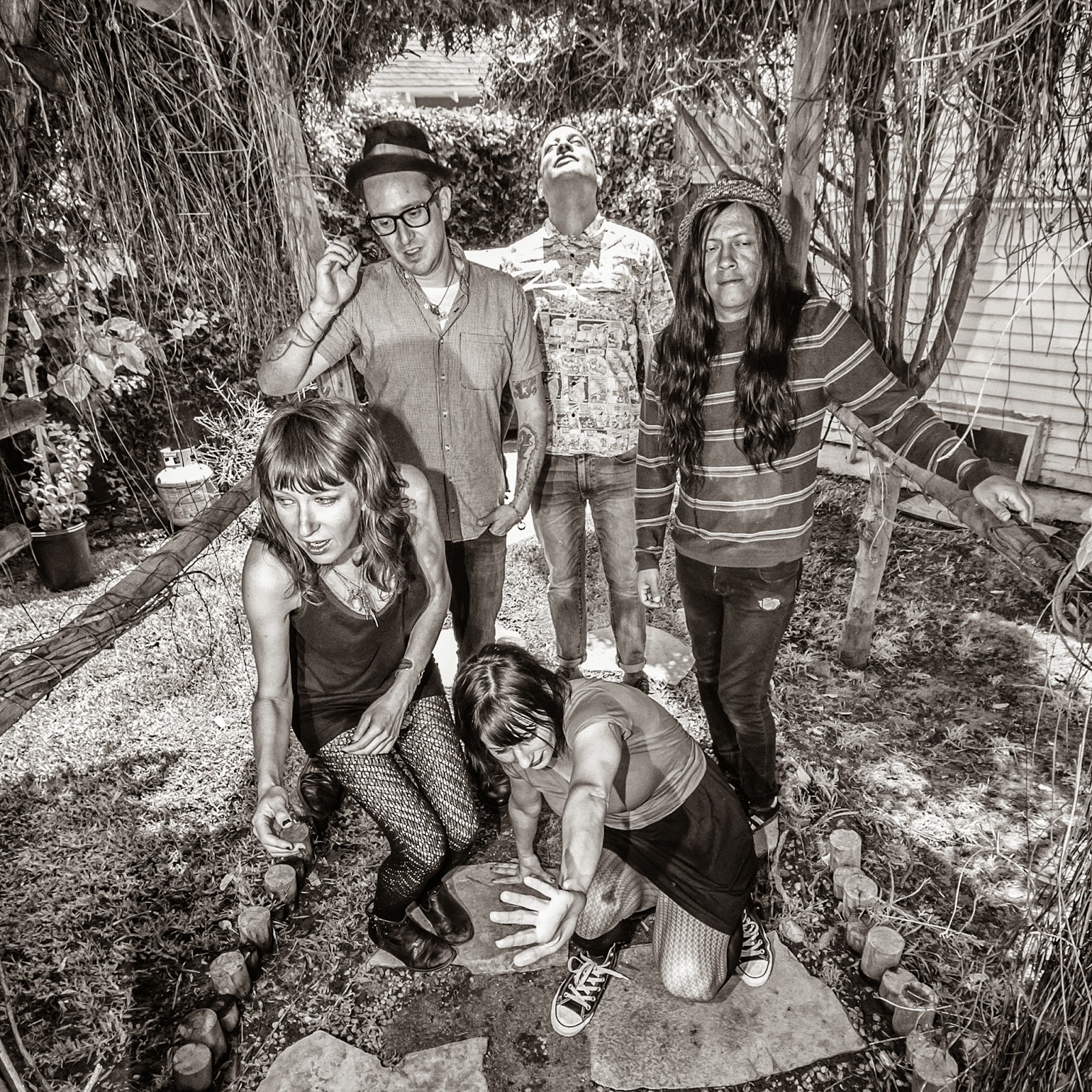 Musically, White Murder are as varied as their talented musical pedigree of previous bands, Red Onions, Teenage Knockouts, Neon King Kong, Jail Weddings just to name a few. While this variation might be a thorn in the side for the lazy ear, it is a revelation to those ears willing to go along for the musical ride known as White Murder. What White Murder does so effortlessly is pick and choose scenes and styles (punk, post-punk), from multiple decades (‘70’s –‘90’s) to combine a very unique band fronted by two female vocalists who don’t merely trade off vocals as they sing together in such effortless cohesion that you think it’s just one signing the entire time.

Interview by Ed Stuart
Who’s answering the questions?
All five of us.

Where is the band from?
Long Beach, San Pedro, Los Angeles

How did the band start?
Our first band meeting was at The Pike, over breakfast and many Bloody Marys. We called White Murder our “life raft” because we were all going through our own major life crises.

What bands did you have in mind when starting this band? White Murder’s sound is definitively a mix of punk, post-punk and late 80’s indie sound.
We all brought our own influences and we had no idea what the band was going to sound like until our first practice.

While doing research on the band, I read an article in Long Beach Post about White Murder. In the article, the band was referred to as a super group to the disagreement and dismay of some of the commenter’s. Do you think there a definition of super group?  If so, what would it be?
Aren't super groups from the '70s?  We were all born in the '70s, so...

Do you think music can still be a vital force in such a disposable age?
Why else would we be doing this?

50 years ago people used to buy music and get their water for free, now people pay for water and get their music for free. How do you think this affects music in any way?
People are less hydrated and more melodic.

Some bands institute rules for their band. For example, no more than 1 drink before playing live. In a Razorcake interview, I had read the band has a dinner rule before the show. What is the reasoning behind this?
It isn't a rule. But, it helps a great fucking deal to be on the same page. It's family style!  As a matter of fact, we're answering these questions while eating dinner together.

In the video for “Safety In Numbers” the band is seen inflicting harm to an unseen person, handed a shovel and told, we guess, to dig their own grave. In the “Cold Dark Night” video, the band meets their demise at the hands of homicidal hitchhiker. Are the stories in these videos connected?
The stories in the videos are not connected. “Safety in Numbers,” was made by Jimmy Fusil; who we love. “Cold Dark Night,” was made by Noel Maitland; who we love.

Where can people hear the band?
whitemurder.com

What’s next for White Murder?
Right now, we're going to digest our tacos and play a show in Tempe, AZ. After that, new songs and a new record.

Posted by Audio Ammunition at 12:59 PM