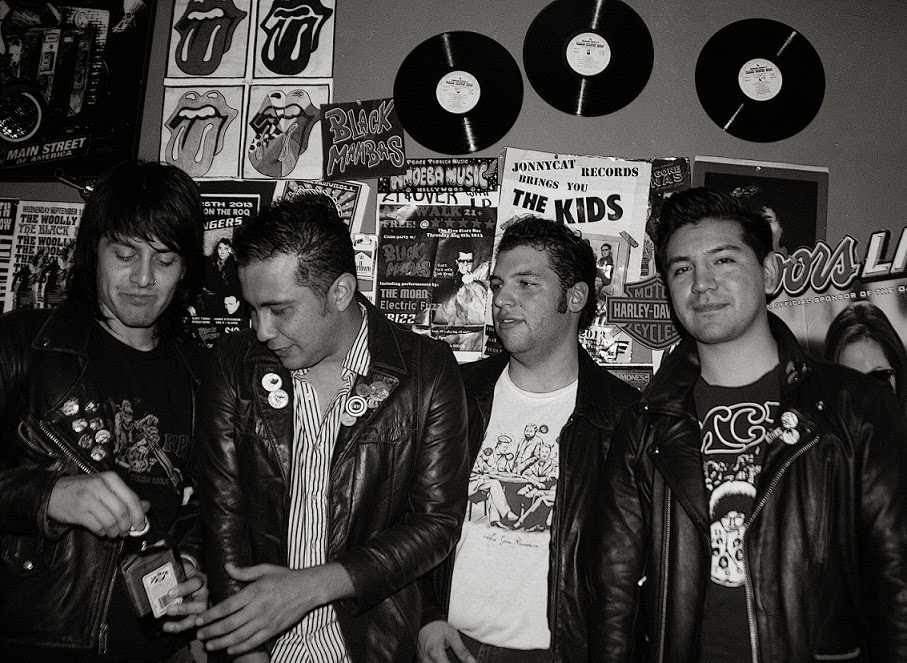 The Black Mambas are the kind of folks that would roar up to the local high school hop in black leather jackets, a ’57 Chevy, kick the nice vocal group, in matching blue powdered suits that was performing a nice slow dance number, off the stage, plug in their instruments and immediately create a tornado of lawlessness on the dance floor. Imagine if Gene Vincent and His Blue Caps got into a knife fight behind the American Legion Hall with The Dead Boys and the members of each band that were still standing dusted themselves off, went inside and started playing together. Black Mambas are full throttle, all engines on, crash and wrath Rock N’ Roll!

Please introduce yourselves and how you contribute to the Black Mambas gang.
ERIC MARTINEZ: I play bass guitar.

How did you all meet and decide to play music together?
EM: We all went to the same high school and all our friends knew each other, although not all four of us ever hung out together at once. Bell Gardens is a very small city so if you know one rocker you are pretty much bound to meet every other one.

MP: Dorian and I met in middle school. We were in a band together late in high school but it never stuck. Then I met Leroy through mutual friends and we began playing and recording in a punk band. After some time playing with Leroy, I called Dorian in to start a different band and that became Black Mambas.

DC: The motive for the music we started to play came from what we felt there was lack of in our city. All we ever wanted was to have parties where we can have fun at with the music we wanted to hear. In the beginning it was just vocals, guitar and drums. After trying out different bass players we decided to stay a three-piece since no one was able to keep up on bass.

LM: Eric was there since the beginning of Black Mambas playing in our brother band Stitched Lips (disbanded). Eric volunteered to play and was more than capable of keeping up and adding to our sound. Eric eventually became a permanent member and now here we are!

I saw that piece LA Musica did on you guys at the Viper Room. In it you said that your first and foremost influence is late 1970’s punk rock. As for myself, I got into a lot of other types of Rock N’ Roll through punk rock.  Like from the Ramones I began to appreciate The Beach Boys and The Ronettes.  I hear a lot of 1950’s Rock N’ Roll in your music. Did you get into that type of music through punk?
DC: Finding out about The Ramones and The Cramps it definitely made me dig deeper to find out more about American Rock N’ Roll like The Shangri-Las or Carl Perkins.

MP: Dorian and I would swap CD's in grade school. Ramones, The Clash, that sort of stuff. Our personal catalog grew from there.

LM: I first got into the Misfits and Ramones thanks to my cousin. Eventually, the more punk bands I discovered, little by little I started getting into different genres and getting into artists like Chuck Berry and The Animals.

EM: Yes and no. I grew up with music in my family so I was exposed to different types of music at a young age. Once I discovered punk, ‘70’s punk to be more precise, and saw the connection to Rock N’ Roll, blues and all the other different groups and singers that were doing it, I was hooked. So it’s inevitable to come out in our music. 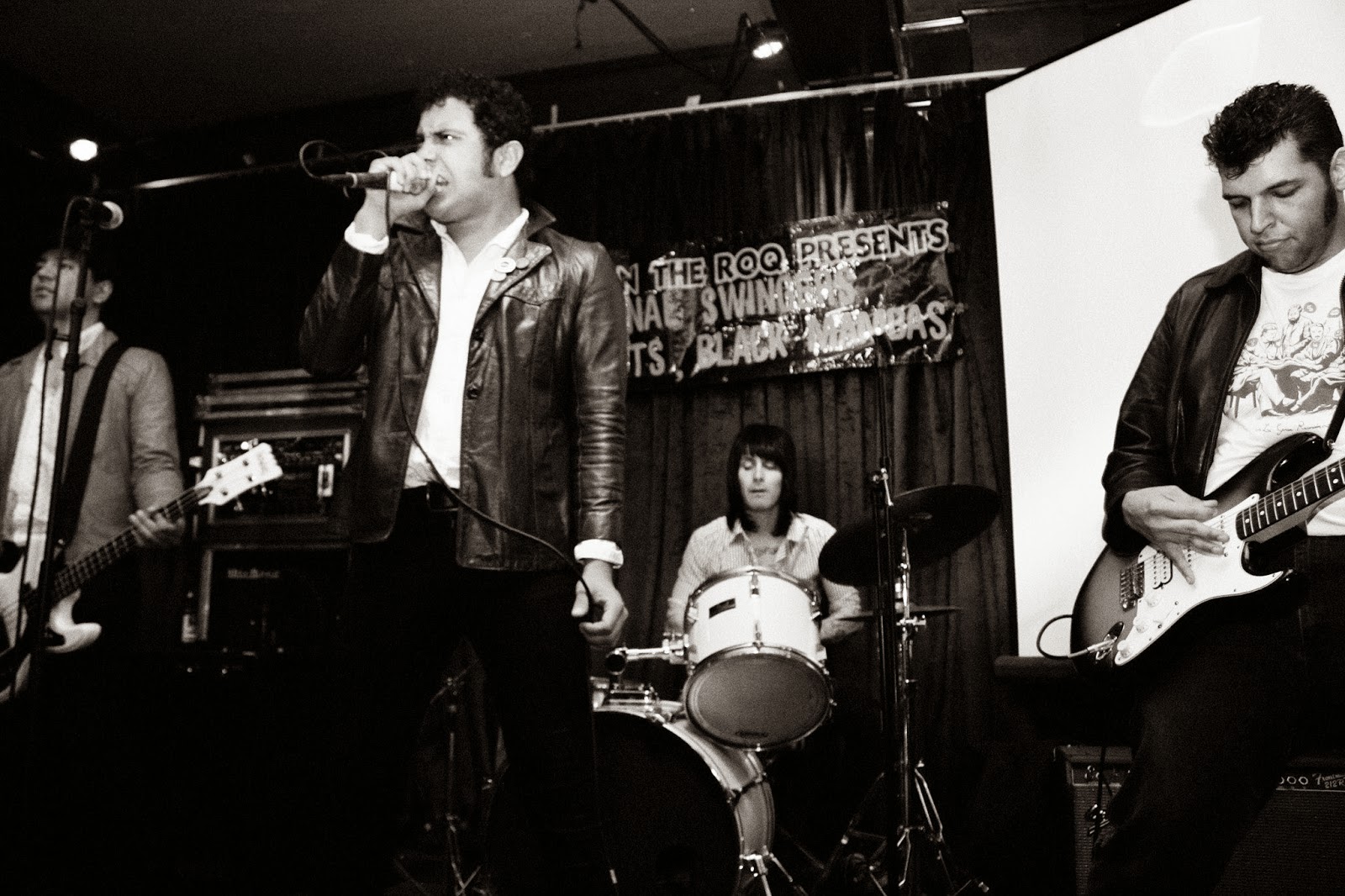 On your Facebook page, right above the post with that Viper Room interview it says “A venue we no longer care for.” Was there a particular incident that made you guys not fond of that place anymore?
EM: Well without getting too into it, we just didn’t like the way we were treated. We like Hollywood, but we think there are cooler places to see a Rock N’ Roll show. It was our first time playing there and it’ll probably be our last.

In your experiences, what are the best and worst parts of being in a band?
EM: The best thing about being in a band is probably the brotherhood and the camaraderie of making and playing the music you love with like-minded individuals. Plus the bonuses you get, meeting new people, traveling, and booze. The worst parts: Meeting people, traveling, and booze.

DC: Waking up hung over in another zip code while touring is the best. Worst part is promoters/venues/clubs taking advantage of you.

MP: Best part is the audience, the ambience of a great show. The bad: A certain someone's night terrors for starters (cough, cough) Leroy.

LM: I can say the best part is freedom of expression, comfort ability, going out far and creativity. Some of the worst parts are that not everyone you meet is going to like you and not everything works out.

What is your favorite album to listen to from start to finish?
EM: That’s a tough question; it depends on my mood. If I had to choose, I’d say Kinks, Muswell Hillbillies, Alcohol, man.

DC: Something I'll never get tired of, The Cramps Stay Sick!!

MP: I would have to say: Lambert, Hendricks & Ross! Alan Price Live at Rockpalast or anything by Bobby Darin, some Dutronc. Tons of good music out there...

LM: A though question for sure, I can say the album Enough from Bohemia Vendetta has given me much inspiration and it’s very influential, but that’s just one of many.

I was reading this interview with Keith Richards and he said that anyone that buys digital music is getting ripped off.  Do you agree with this?  Why or why not?
DC: There's a price to be paid for convenience. I always like going to a record store picking up a bunch of stuff, then standing in line trying to debate what should I take home because I only had so much money. Reading the lyrics or the liner notes, it felt like you got to know the band. Hell yes people get ripped off.

EM: I guess there is some truth to that. Digital music diminishes the sound quality of a good record and all the hard work a band put into it, but times have changed and I don’t think digital downloads are going anywhere, not with this lazy generation.

MP: I think it’s up to the buyer. Some people don’t need a physical copy, others do. Each serves its purpose though.

LM: Bands work hard to create an album, the booklet with lyrics and photos. With downloads it’s just not the same. It does make you feel closer to the band knowing you have proof and possession of their actual album. 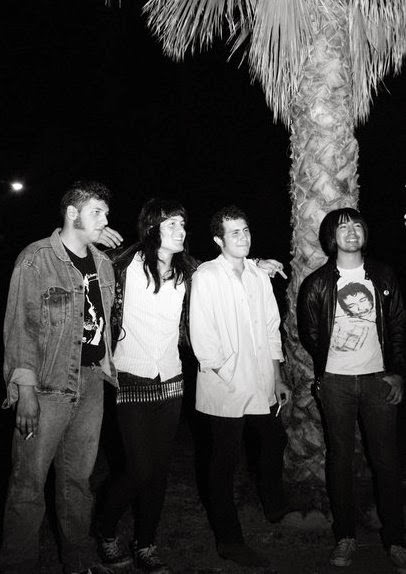 You have an EP and a full length on Wild Records.  How did you guys hook up with those fine folks? What do you think of the documentary about the label called Los Wild Ones winning so many awards?
MP: We met Wild Records because of now label mates The Hurricanes. We were playing a show in downtown LA and they had heard of us. They dug our sound, introduced themselves and referred us to Wild Records. After that owner, Reb Kennedy, approached us about recording a 45 and we went on from there. As for Los Wild Ones, it’s wonderful it’s winning so many awards domestic and abroad. Goes to show the tenacity, perseverance, and tough-as-nails attitude this label has.

What kinds of things do you guys like doing in L.A. when you’re not playing or writing music?
LM: We like to go out and check other bands sets, hang out with family or close friends.

EM: Believe it or not we all kind of do our own thing. If we do get together we’ll bring out the grill have some carne asada and just get hammered drunk.

DC: If we end up in downtown L.A, we usually go to a show and see what kind of shit other local bands are doing or not doing.

MP: Eric is spot on. Grilling is my favorite thing to do, if not that, then going out to see bands and supporting the music scene.

Where are the best places for people to hear or buy your music?
EM: We have a SoundCloud with a few tracks from our album; we also have music on our Facebook. You can buy our full length or 45 at WildRecords.com or come meet us and buy one at our shows. Also, YouTube Black Mambas “Rock n’ Roll,” don’t forget “Rock n’ Roll” if you do then you’ll get some other bullshit.

What does the band have in store for us in the near or not so near future?
MP: We're looking forward to touring Europe in September, maybe a second album next year. Probably get around to doing a music video. We’ll see!