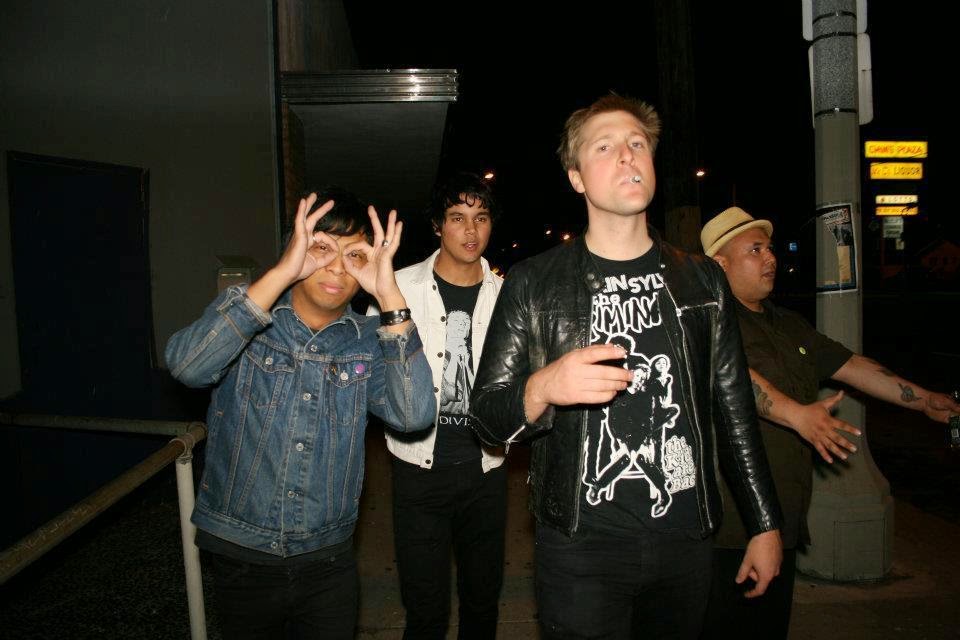 Hailing from different parts of the ever-growing metropolis better known as Los Angeles, LA Drugz have tapped into the cities roots of both punk and power-pop by mixing both The Beat and Nerves penchant for melodies while having enough grit to hold their own with any punk band that shares the stage with them. LA Drugz features an impressive resume of both past and present bands (Clorox Girls, Suspect Parts, Maniac, Bad Machine, Images) and received the EP of the year award from Lord Rutledge himself for Outside Place. If that wasn’t enough, their video for “Outside Place” is homage to one of the greatest cult classics of all time Repo Man, but the real cult classic might just be them.

Where is the band from?
We're an LA band from nearly every corner of Los Angeles County. I live in East Hollywood, JD in East LA, Cezar in San Pedro and James in Carson.

How did the band start?
As the third lineup of Clorox Girls was breaking up, Cezar and I tried to form a Beach Boys cover band in Spanish. He had some connections in the Latino low-rider world, and we thought we could make some money by forming a cover band. Learning full Beach Boys songs with all of the harmonies in Spanish proved to be extremely difficult if not impossible. We opted to start a band that played originals instead. James plays drums in a band called Images. I was really impressed with his drumming and singing so we brought him onboard. JD is an old friend of James' so he brought him in on bass. With our powers combined, we are . . . LA DRUGZ! 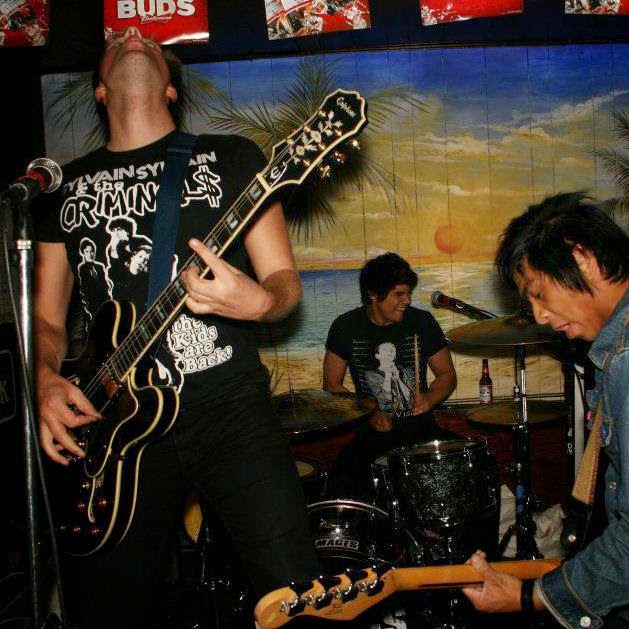 What bands did you have in mind when starting this band?
Shit, well, ‘60’s LA music like Arthur Lee/LOVE, The Seeds, The Standells. Also some power pop stuff like The Nerves and The Beat, UK stuff like Small Faces, The Who, early Stones and early Beatles. I guess the Nuggets comps mixed with poppy ‘70’s punk like Buzzcocks, The Kids and The Boys. 1966-1979, those are the years containing the music that we're into.

In an LA Drugz article written on the Ratboy ’69 blog, it seems like every member in the band had his or her lives altered and changed by music. I don’t mean in the typical way every musician does, I mean music gave him a mission/life choice from a potentially dangerous option.
Yeah, Ratboy is over in the Netherlands I think. Sure. Cezar grew up in North Long Beach on the border of Compton. He was literally down the street from Snoop Dogg. Cars full of people looking for a party would ask him, "Where Snoopy house at?" At that time there was a lot of gang shit going down. He told me that he could have gotten into the gang shit or music, and he chose music. James' older brother was involved in gang stuff in Carson and actually had a hit put on him. I think seeing what his older brother went through made James realize that getting into music was a better option. JD has told me that music saved his life. Me personally, I would have had a much harder time without it. I came from a pretty dysfunctional family and as a teenager got into a bit of drinking and drugs as well as some petty crime like shoplifting and vandalism, if not for falling into music so hard, I might have ended up in jail, who knows.

To piggyback off this question, how supportive are your families of playing in bands?
My dad played in an early 80s punk/new wave band in LA called The Defenders. My grandpa is still active singing in barbershop quartets. My sister played in a few bands out in New York. I come from a musical family. That said, my dad has told me "You have an expensive hobby, son." As painful as that is, he is probably right!  Ha ha!  Even though I spent ten years of my life releasing albums and touring the world with Clorox Girls, with every band you have to start over. Sometimes I have that internal conversation, "Is this really worth it?" But I'm getting off track. Yes, my family has generally been very supportive even though they like to give me advice on the reasons I should quit music and focus on a more sustainable career. We practice at James' parent's house in Carson.  They let him construct a rehearsal room and mini-recording studio, so they have been extremely patient and supportive.  Cezar's Dad has also been very supportive of his son and I'm sure JD's parents are proud of him as well. 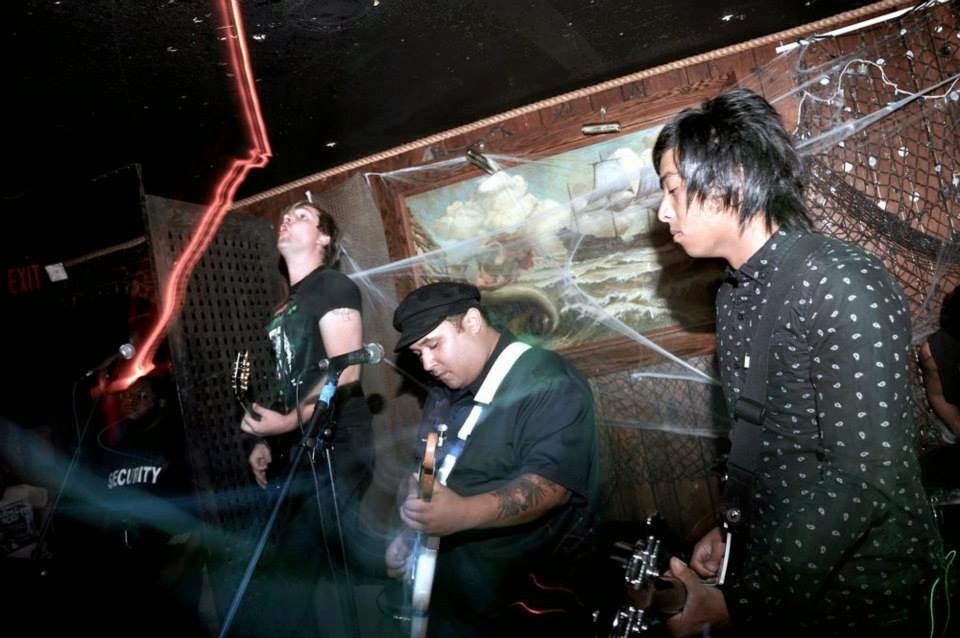 Do you think music can still be a vital force in such a disposable age?
I agree with you that this can be a very disposable age. We live in a free culture. People expect music for free via download, streaming and in person. Everyone wants music including advertisers but no one seems willing to pay a fair price for it. Music and the musician have become commodities that our society takes for granted. That said, of course music is still a vital force. I don't see the same kind of cult dedication for bands that existed in the ‘60’s, ‘70’s, ‘80’s, or even the ‘90’s, but when the right band comes along, they will inspire scores of kids to start their own bands. The Internet can instantly broadcast music across the world, but the problem is oversaturation. It's hard to get excited when we're over stimulated and oversaturated. Also, most of the bands now don't really match up to their forefathers, so musicians have to bring some balls to the table too.

Justin, you have lived in many different cities over the years, Portland, Seattle, Madrid and now Los Angeles. Have you noticed any similarities between each cities music scene or is each one completely different?
When I lived in Portland about ten years ago, it was a very close-knit incestuous scene and all of the bands really supported each other. There were great bands like The Observers, The Minds, The Triggers, and The Hunches. The Exploding Hearts' car accident had recently happened and that was still very fresh and very painful. I am very lucky to have taken part in a cool time in Portland's musical history. I went to high school on Bainbridge Island, which is near Seattle. I cut my teeth on punk shows in Seattle in the ‘90’s. It was an interesting time full of skinheads; punk, hardcore and 3rd wave ska.  Gradually everyone got into Murder City Devils and the whole greaser thing. In Madrid, when I lived there, Malasaña was still popping off as the Rock and Roll neighborhood with a ton of great bands, DJ’s and Rock and Roll bars. After Madrid, I was in London for a couple of years then LA. I'm coming full circle because I was born here, moved away when I was 11 years old, now been back for about 5 years.

Similarities?  For the style of music that I have played, punk, Rock N’ Roll, power pop, in all of the cities it is very much the same. You have a core group of people who end up in most bands. It's hard to find a good drummer and multiple bands share the same drummer. You have the same 50-100 people going to these shows in small bars or clubs. You become a part of small, but dedicated scenes and fan bases. The easiest town to play music in, I guess, was Portland because it was so cheap to live there. My rent was $280 a month and I lived in a huge 4-bedroom house with 3 roommates. I guess it has gotten a little more expensive. L.A. is a pretty tough town to make music happen in but that said there's still a ton of cool bands and cool people who shake things up from time to time.

Justin since you are an author in addition to being a musician. Do you notice the same struggles for a new writer to have work published in much the same ways it is for a new band to get songs released and noticed? Or are the music and literary worlds two different animals?
There are a lot of similarities and a lot of differences. I think to be successful in both worlds you have to do a lot of schmoozing, meet a lot of people, get to know the movers and shakers and work with them in some way. It's pretty much the same for any business although people are reluctant to look at writing or music as a "business." That said, most writers and musicians are terrible business people and lose a lot of money pursuing their passion. And yeah, it’s a similar struggle. You have to have somewhat of a reputation to get noticed by any sort of media, which is ultimately what you need for success. So for a new writer or new band, no one knows who you are, but my advice would be to keep on plugging away, it might take months or even years, but good work gets noticed. If you have faith in what you do, then others will have faith too. As easy as it is to be discouraged by lack of attention, just keep doing it if it makes you happy. It's not an easy road to take. The musician life and the writer life are really difficult and frustrating paths with few payoffs on the way. That said I have met some of the best people through music and through writing so it is equally a curse and a blessing. 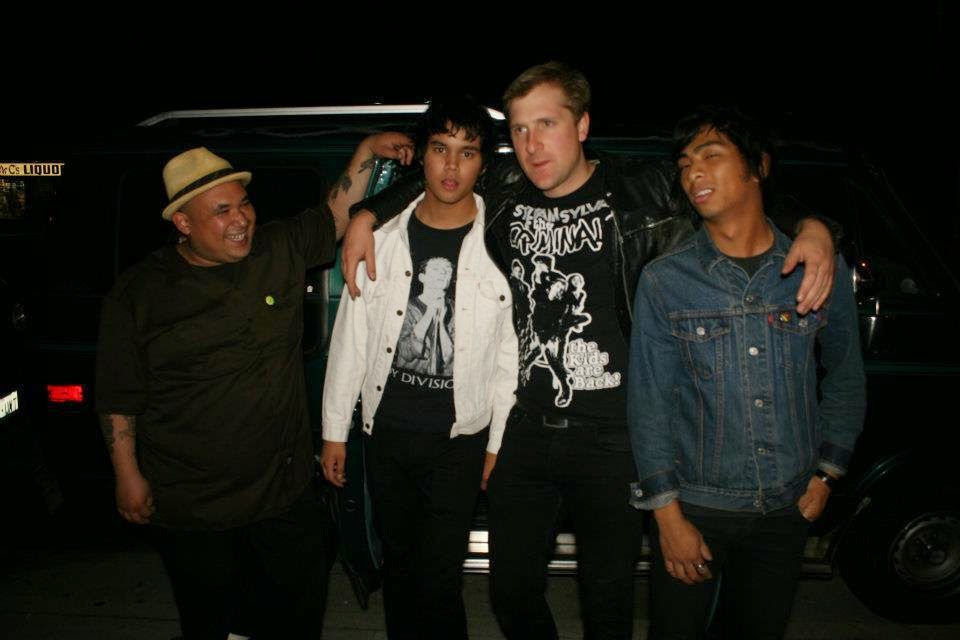 In the 2013 edition of the Lord Rutledge Awards, L.A. Drugz won the EP of the year for Outside Place, how excited was the band?
Lord Rutledge has been very supportive. What a great dude. Always honored to be included on anything he puts on his site. What an excellent music blog.

Is the band’s favorite movie Repo Man? The video for “Outside Place” is practically a shot by shot remake and homage to one of the greatest cult classics of all time.
Repo Man is one of my favorites for sure. It's one of the films that really personified the gritty side of Los Angeles as well as the wacky new age religion side. As a native Angeleno and as a punk I love the shit out of this movie. The co-directors Brett Roberts and Ardavon Fatehi did a lot of research and we managed to shoot at many actual Repo Man locations. And I got to drive a car in the LA River! Swerving around like a maniac! There's at least one bucket list item checked off!

Where can people hear the band?
We play out live in LA County all of the time. Songs can be streamed and downloaded here: www.ladrugz.bandcamp.com. Our video is on YouTube and links to everything are on our slavebook aka Facebook page as well.

What’s next for L.A. Drugz?
We're planning on recording some newer songs: "All Burned Down,” “Runnin',” and “Kids of Today" for a new single. We've also been invited for some European tour dates so watch out world!

Posted by Audio Ammunition at 9:06 PM