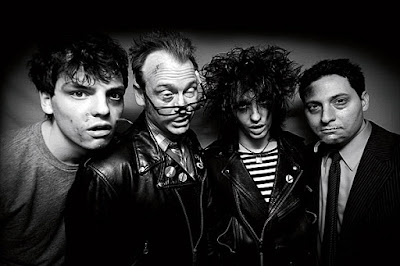 Remember the days when rock n’ roll actually meant something to people, when you could relate to the music on an emotional level and the bands didn’t use obscure literary references and impossible abstract metaphors in their songs? Well Neptune City, NJ’s The Disconnects do! These boys play honest to goodness blood stained, tear soaked rhythm n blues based punk rock n' roll. The kind of music that has resonated in the caverns of the human condition for decades, and with good reason. Everyone runs out of luck, out of money, out of love and these Jersey boys are here to tell you it’s OK to be miserable and pissed off about it sometimes, because they’ve been there too. In time, deep down inside the feeling of knowing everything is going to be alright eventually starts to pool at the bottom of your heart. Listening to the Disconnects just makes that feeling bubble to the surface faster!


Let’s start with introductions! Who is currently in the band and what does everyone do in it?


How did you all first meet and decide to play music together?
RYAN: We all had bands before this, Tommy and Anthony were in a great band called The Flareups. I was in a group called The Stun Gunz with our first drummer. I had seen Tommy around a bit but we never spoke back then. Our bands had broken up and I was doing gigs with random bands just to play. I was opening up one night for Cheetah Chrome in NJ and Tommy was at the show. We did a cover of Pirate Love by Thunders and Tommy came up to me and said he liked the way I played so we set up a time to play together. I pretty much had the first EP written at that time and played the songs for him. He was putting leads down on the songs that blew me away and we knew we had a little something there. He called Anthony and I called Joe our first drummer to see if they wanted to put something together and we hit it off. I knew Anthony was the guy as soon as I heard him talking about The Only Ones haha. Rob is our new drummer, formerly of River City Rebels and he couldn't fit any better. He was a Disconnect long before he even knew!


Is this the sound you had in mind when first starting the Disconnects or did the music kind of take its own direction when you started playing together?
RYAN: We certainly had a good idea of what we wanted to do. Tommy and I would play guitar then spin records, and we had the same ideas about the direction of the group. We get compared a lot to bands like Dead Boys and Johnny Thunders. They are definitely influences and you can hear hints of them in our songs but I don't think we really sound like them. We sound like The Disconnects. When you have a song in your head and then you finally lay it down with a full band its cool how it changes. Everybody adds something to it and that's when you get your sound. That's why I am really proud of Wake Up Dead. We came into our own.


Who would you say has had the biggest musical influence on you? If you can recall, tell me a bit about the first time you heard this band or musician and how it changed you from that point on.
RYAN: Biggest musical influence for myself is Chuck Berry. Not only is every Disconnects lead you hear rooted in Chuck, but every good Rock N Roll lead is! Another huge influence was Lou Reed. I was really young when I discovered Lou, and that could be the reason I'm so screwed up today, haha. The first record I ever bought was Lou Reed - Transformer. I had no idea who he was or what it sounded like but I saw the cover and the back of the album and was pretty damn curious. At 13 playing that record on my parent’s record player I'm sure they were worried ha. It's still in my top 5 favorites. It just said to me, it's okay, be you and fuck ‘em all. That later opened me up to The Velvet Underground and beyond. I was in Rock N Roll heaven baby.


What typically inspires your song lyrics? Can you remember the most unusual person or event that prompted you to want to write a song about?
RYAN: Whatever I'm feeling really. On our newest LP Wake Up Dead there are some truly ferocious songs and then some more lovey kinda tunes. It's life, you self loathe, you fall in love, you get lonely, you get depressed, you pull yourself out of it, you dream of a better future, you party. Highs and lows, ya know? Some of those songs were written in the lowest points of my life and some written at the best. You write what you know, your experience. Every song on that LP is based on a person or a feeling at the moment it was written, good or bad. I wrote “I Don't Mind” at a time in my life where I was living without electricity or hot water for a while and really struggling. I remember sitting in the dark with an acoustic guitar sorting it out. It makes me smile because it's a really sweet melody in such a shit situation. That's The Disconnects.


Craven Moorehead, a local DJ out here in Phoenix, AZ played a song off of your new LP Wake up Dead a couple of months ago on his radio show Skapunk Radio. Are you guys taken back at all on how well received and how much critical acclaim the new LP had gotten?
RYAN: Haha I remember them playing it but I didn't know that's the name he went by. I am surprised by how many people are getting into the group. I wrote most of these songs in my basement and to hear stations and magazines all over the world talking about it is awesome. I'm really grateful when someone gives us a write up or plays our songs and I'm kind of amazed how far it's reached.. I'm just a beer drinking zilch from Jersey pouring his guts out on vinyl and am just happy someone’s listening. 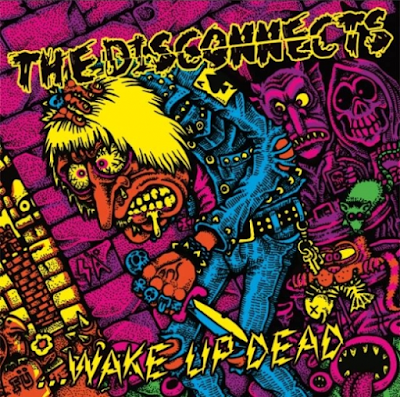 You guys are getting ready to go to Europe at the end of the month touring with The Sick Livers. How did you hook up with those guys and will this be the Disconnects first time in the UK?
RYAN: If you haven't heard The Sick Livers you need to! They are, as the Welsh say: tidy as fuck. Long before this tour even got put together Dom Daley of Glunk Records in the UK was in touch with us and was digging our tunes.  He even came to see us in Brooklyn on holiday! I got my hands on The Livers first LP and was into it! Our fabulous label Baldy Longhair Records got us distribution through Glunk in the UK and the records were selling pretty well. Well enough to put a tour together. Dom was championing The Livers on his label and it seemed like a no brainer. This is our first time touring the UK or anywhere outside the US. Glunk and The Livers have been very kind to us, even teaching me the slang I need to know over there! The Livers got a new LP coming out in August on Glunk Records in the UK and Baldy Longhair in the USA and it is just ripping man. 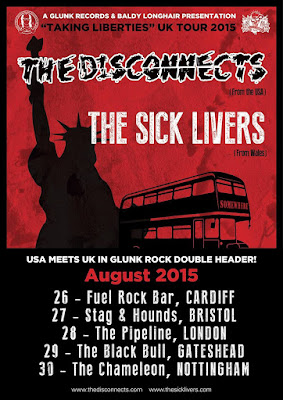 The Disconnects have shared a bill with a lot of legendary punk bands, most recently G.B.H. and The Rezillos. A man wiser than myself once said to me “Don’t meet your heroes, they’ll always disappoint”. In your experience, have you ever found this to be true?
RYAN: Yes, it was very cool to play with those bands. We have had the great pleasure of opening for a lot of bands we look up to. Fuck that don't meet your heroes thing, meet ‘em all and learn what you can from them! They are people like all of us.

I was reading this interview with a former drummer for The Cramps and he was talking about how guarded Lux and Ivy were with their image, so much so that he said they seemed imprisoned by it. How important do you think image is or should it be to rock n roll bands these days?
RYAN: That's interesting! I'm obviously too young to know anyone in The Cramps but I've heard that Lux was a shy kinda guy outside the stage which is funny considering what a deviant he was on it. Image, a much talked about topic in the punk scene. Personally, I love when people get creative with fashion and express themselves. I fucking despise when people where Motorhead shirts because they think it's cool and can't name an album they put out. I don't care how you look. Just be you. Style is style and everyone has a different one. Also, don't be the douche in the back of the club all gussied up with your arms folded too cool to care about whose playing. You suck, and we all know you do.


Where can people go to hear or find out more about The Disconnects?
RYAN: You can go to our Facebook page where we post our news most and along with THEDISCONNECTS.COM You can also find us at your nearest hot dog vendor.


What’s in store for the future of The Disconnects?
RYAN: Well we have the UK tour in August, then a few shows in the states when we return. Then, we are gonna throw some meat on the grill, drink some beers and write another album. Also, look out next summer for a Disconnects / Sick Livers US tour. Thanks for the interview and anyone who reads this, start a band so we can come to your town and play a show with you. Cheers! 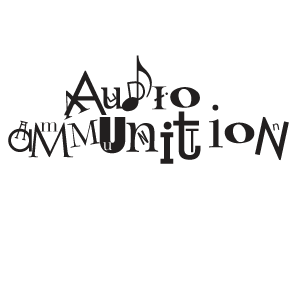 Posted by Audio Ammunition at 6:15 PM