Lead singer/rhythm guitarist Blonde Dave from Vancouver's The Fatalz took some time out to talk to us about Van Halen, hot dogs and answers the burning question; what exactly is "vest rock".  Read it all right here, only in the illustrious pages of Audio Ammunition!

Who is currently in The Fatalz and what does everyone do in the band?
Rob-Drums, Vocals
Tim-Bass, Vocals
Christian- Lead and Rhythm Guitar, Vocals
Blonde Dave- Lead Vocals, Rhythm Guitar


Can you remember what band or musician inspired you to want to pick up an instrument and learn to play and/or write music?  Tell me about the first time you heard them and how it made you feel.
DAVID: We discussed this as a band and thought Tim’s experience was the most inspiring. When Tim was 11yrs old his parents sent him to visit his uncle who lived in Ontario. Tim doesn’t remember which day or month it was but remembers that it was an especially hot day. Tim’s uncle took Tim boating where he proceeded to get so wicked drunk to the point that he could no longer operate the boat. Tim was promoted to captain and given the responsibility of driving the boat so his uncle could have a “rest” in the back of the boat. As Tim drove the boat into the sunset the song blasting on the radio was Kim Mitchell “go for a soda”

The Fatalz are described as “70’s punk inspired vest rock”.  Tell me a bit more about this “vest rock”.
DAVID: The idea of vest rock was inspired from the sci-fi/action movies of the 1970/80s which I like to think sets the stage for our music, but it was really just hot arms that brought the idea to life.

Your band is currently based in Vancouver, BC.  As everyone knows, some government must have been conducting secret experiments up there in the 70’s that gave everyone super magical musical powers.  Is it tough playing shows up there and getting people to come out and take notice with so much radness going on?
DAVID: There is a lot of great support for the local scene in Vancouver. However depending on what’s on the CBC can sometimes determine turn out of the show. 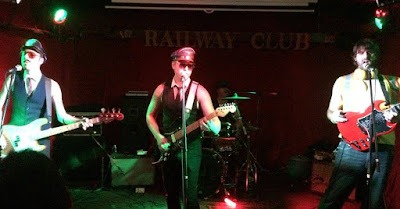 What sorts of things typically inspire your song lyrics?  Are there any subjects in your songs that you try to stay away from?
DAVID: Typically all songs are either about making out or spinning subjects to stay away from….hmmmm, nope none


Have you ever heard a song that’s so good you wish you had written it?
DAVID: Probably “Panama” by Van Halen

What records do you listen to that you think Fatalz fans would be surprised you own and like?
DAVID: Kick Axe, Max Webster, April Wine, Loverboy


If you were shipwrecked on a deserted island and you had only: (A) one person with you, (B) one record to listen to, and (C) one meal to last you for the remainder of your life, what would each of these be?
DAVID: hot dogs and Kim Mitchell


What’s the best piece of advice that anyone ever gave to you that you still follow to this day?
DAVID: “The Lord loves a working man, don’t trust whitey, see a doctor and get rid of it”


What’s coming up in the near future for the band?
DAVID: We have a 100 bucks from the last show so sky's the limit I guess.