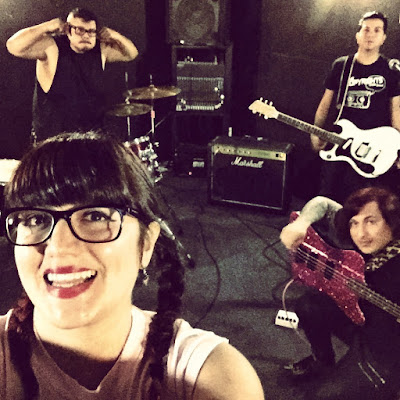 The Sweethearts are an explosive female fronted punk/power pop band from Austin TX.  Lead vocalist Linette was kind enough to recently lend us a bit of her time to tell us about her band and give her opinions on a few topics.  Enjoy!

Let’s start with some introductions, who is currently in The Sweethearts and what does everyone do in the band?
LINETTE: Hi! I’m Linette, singer and songwriter for the Sweethearts.  My husband, Ren Hernandez, plays guitar and sings backups, and also writes songs for the band. We are the founding members of the band and have had several lineup changes throughout the years. We currently have Christy Darlington on bass and Rudy Rodriguez on drums. Christy Darlington is a Dallas native that plays in his own band, Darlington. We were fans of his music before we became friends and he became our bass player. Rudy is an awesome drummer with excellent stamina and he understands pop/punk music very well. He is originally from Waxahachie, TX.

Now for The Sweethearts origin story, how did you all meet and decide to play in this band together?
LINETTE: Both Ren and I have been playing music together since we were teenagers. We used to be in a punk rock cover band in our home town (playing mostly Screeching Weasel), Brownsville, TX. We met at band practice, started dating, and have been together for almost 20 years. We just got married last year. We moved to Austin in 1999 and started playing as The Sweethearts, shortly after. We’ve gone through several band members and have had several breaks along the way, but always managed to come back to playing music.  After a two year break from playing, both Ren and I were feeling that it might be time to start playing again. We didn’t want to put an ad out to look for a drummer and bass player, we just wanted it to happen naturally, and it did. Christy drove down from Dallas to play a solo gig in Austin and was staying with us. We went to his show and ran in to Rudy, who was also there to see Christy perform. Rudy was a familiar face that we would often see at the same punk shows. Rudy offered to play drums for The Sweethearts that night and so we took him up on the offer. We practiced with Rudy and it sounded great!  All we needed was a a bass player.  We told Christy we were looking for a bass player and he offered to tryout. It worked out perfectly, and we’ve had three great shows with the new line up so far. 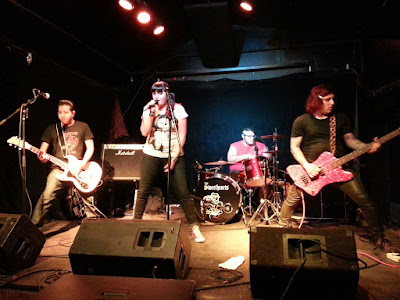 When you first started playing together, is this the sound you had in mind at the beginning or did you just start playing together and just saw what came out?
LINETTE:  Both Ren and I have always loved punk rock music. It’s our number one influence. We also like oldies, 50’s rock n roll, and 60’s girl groups.  When we both started writing songs our influences naturally came out in our song writing. We wanted it to be fast, catchy and fun with a little bit of heartbreak and attitude.  I think over the years we developed our own style and also grew as musicians but we never strayed too far from our original influences.

I found the lyrics to your song “Press Kit” interesting.  It sort of gives information like a press kit but more, it seems like you tell the philosophy of why you do what you do in the band.  Did you find having to answer to people, having to explain being in a punk band?
LINETTE: I wrote “Press Kit” around 2003-2004. At the time, I had been working on mailing Press Kits to record labels and was getting a few responses from some of them. Lookout Records and Fat Records had responded back to me by a letter in the mail stating how they liked our music but they were not signing any bands to the roster at the time, and to let them know when were in town. I wrote “Press Kit” out of frustration but at the same time was accepting the fact that we could still do things DIY and that not having a label wasn’t going to stop us. It was harder back then for bands when there really wasn’t any social media. I really don’t care to be on a label now. We are perfectly fine doing things DIY.

And speaking of your songs, what led to the decision to sing a song entirely in Spanish (Spanish Love Song)?  I love that you did that, there don’t seem to be enough of us Latinos into punk, at least not around where I live!
LINETTE: I had always wanted to write a song in Spanish. I am not super fluent in Spanish, but I am Hispanic, and have been around the Spanish language my entire life. I was also influenced by Selena Quintanilla when I wrote this song. I was a big fan of hers when I was younger, and still am to this day. I thought it would be cool to write a song in Spanish and to play it in a punk band. Ren is very fluent in Spanish, and we plan to write more songs in Spanish in the future. We are currently covering “Como La Flor” by Selena.

The Sweethearts are currently based in Austin TX.  With Austin being such a music town, is it hard getting noticed and getting people to come to shows with so many other bands playing live?
LINETTE: The music scene in Austin is constantly changing and people are moving here every day. New bands pop up and play a couple of shows and then disappear. It is hard to keep up with the scene but we’ve been in Austin for so long that we’ve gotten used to it. The crowds are very random at times and you never really know what to expect. The venues are also constantly changing. It can definitely be hard for a band to get noticed but we just go with the flow and really just play out to have fun. Some of our best shows are when we open up for bands that we like who are on tour. 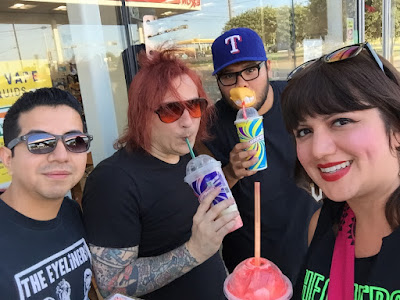 With The Sweethearts being around for a while now and I’m sure you remember the days without Facebook and Instagram, what are your thought on promoting with social media?  Do you feel it actually works or is it just another pain in the ass to have to deal with?
LINETTE: Social media has definitely helped us to promote our band and shows. Back in the day we used to run to Kinko’s to make copies of our show flyers and then would drive around town and post them up in record stores and have friends pass them around. Now we just post our shows on Facebook and Instagram and it’s so much easier. Facebook and Instagram has also made it easy to connect with other bands, book shows, promote merch, and connect with fans. Although, we have noticed that Facebook is not so user friendly for band profiles. They require band pages to pay extra to boost your post.

And speaking of social media; I noticed you list The Queers and Screeching Weasel as influences.  What are your thoughts on this wave of political and moral correctness going around in punk rock lately?  It seems like these two bands are getting the brunt of it and being bombarded on a daily basis.
LINETTE: We’ve played shows with both bands before. We’ve known Joe Queer for a really long time and we’ve also met Ben Weasel. We are fans of their music and think they are both genuinely good people. I think people now a days are very sensitive and constantly trying to find things to complain about and social media is giving those people a platform to post their opinions. Everyone is entitled to their own opinion and beliefs and that is fine. Punk rock music is meant to be different and is meant to be rebellious and to go against the norm. You can’t always please everybody. 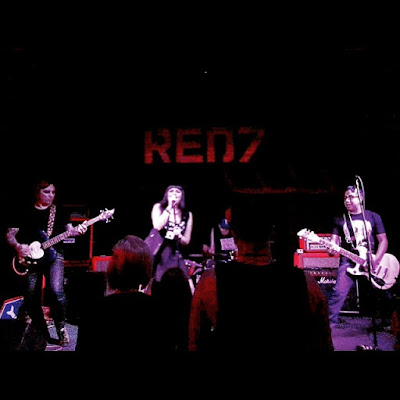 Where can people go to hear The Sweethearts or buy your music?
LINETTE: You can find all of our albums and merchandise at: https://thesweetheartstx.bandcamp.com.

What lies ahead in the near future for the band?
LINETTE: We plan to keep playing shows around Texas, and to hopefully do a little bit of touring within the next year. We also have some new songs that we are currently working on. We should have enough new songs for a full length album within the next couple of months so we would like to get back into the studio soon!