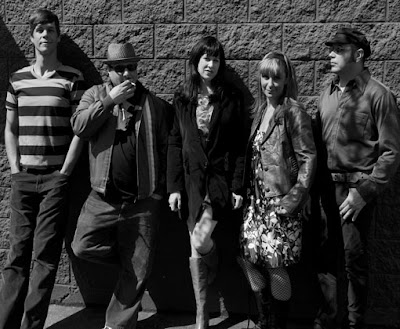 Bonnie and Kirk from the fabulous Portland OR power pop/garage/rock n roll band Beyond Veronica took some time to chat with us recently.  Take a peek and see what they're all about!

Let’s start off by telling us who is currently in the band and what does everyone do in it:
Bonnie Veronica – Lead vocals & rhythm guitar, song writer
Kirk Larsen – Lead guitar & backing vocals
Kurt Steinke – Drums
Neesie Doss – Bass
Earl Temp - organ, backing vocals, & percussion

Tell be a bit about how you all met, and the decision to relocate to Portland, OR:
BONNIE: Kirk & I had been kind of acquaintances for several years but we started hanging out in 2001. We were running into each other at an open mic night run by Kevin Seconds at the True Love Coffee House that he owned with his wife.  We found we had a lot in common and started writing songs together. Then we recruited a couple friends and started the band as “The Veronicas”. We sold that name in 2005 to some Australian girls that had signed with Warner Brothers and changed to “Beyond Veronica”. We’ve gone through a few lineup changes over the years but they’ve all been great.   We had a really strong band in 2005 but really felt stifled in northern California. We had come to Portland a few times to visit and it seemed like a great scene, so we decided we should move. We actually relocated in 2006 but it took us a couple years to get settled & into the music scene and get the band going. We both played with other bands as well to help us learn the in’s & outs of the Portland scene.

Beyond Veronica formed in 2002, so like me, you all remember life before social media.  Do you think it’s become an integral part of being in a band and promoting or just another pain in the ass to have to deal with?
KIRK:  Social media is definitely integral to promoting but it can certainly be a pain in the ass at times. It is much easier to make a Facebook event than print fliers and hang them on telephone poles but you can only target a limited audience that way. I think it's still good to get fliers & handbills out at record stores & venues so that you can promote the band & shows to people that might not see it otherwise.  Social media is also helpful in networking with bands and setting up shows in different cities. You can look up what bands are playing in Seattle, for example. Find them online and listen to music samples to see if they would be a good match to set up a show with and then contact through Facebook or their website. You couldn't really do that 15 years ago.

Your band has a very distinct and definitive sound, did you have an idea of what you wanted to sound like when you first started playing together?
BONNIE:  I was born in San Francisco and moved to LA for high school and College. While there I experienced scenes like The Paisley Underground and the LA Explosion. I didn’t realize it until much later but I was learning about and experiencing music in a bubble. I naively assumed the rest of the country/world had a thriving music scene. Music was part of who we were and how we expressed ourselves. I was fortunate to meet and befriend many of my childhood heroes who would teach me so much about music and expose me to a wider palette of music. I just wanted to create something similar.

KIRK:  We both loved the ‘60s Girl Group & Garage stuff so we wanted to incorporate that somehow. I had more of a rock and roll background so that combined with Bonnie’s knack for pop hooks kind of just meshed into our sound.

I was reading an interview with Kim Shattuck of the Muffs and she said she leaves politics out of her lyrics because nothing dates a song faster.  Do you agree with that and are there any subjects you try to stay away from in your lyrics?
KIRK: Political lyrics can definitely be dated if they’re too obvious. If you’re going to make a political statement I think it needs to be kind of universal in its theme.
We generally try to have more positive lyrics. A lot of times we kind of go for the ‘60s type of love song lyrics but still keep a modern personal perspective in them. Usually nothing too heavy or dark.

You did a video for the song “The Rivers Edge”.  Tell me about your experience making it, who directed it, etc...
BONNIE:  The River's Edge video was directed by our friend Daniel Spiro. Most of it was shot in our back yard or along the Willamette River. He just had a very basic consumer video camera so we decided to just mess with the colors & textures to make it look a bit surreal. Kind of Alice in Wonderland or something.
It was a lot of fun to make and Daniel did a great job with very limited resources.

Beyond Veronica is featured in the massive compilation CD Take Refuge in Pleasure: The Songs of Roxy Music Revisited on Burning Sky Records.  How did you get involved in that project?
KIRK: Burning Sky Records was kind of on our radar as they had done tribute albums for Jellyfish & The Posies.  We had actually started recording our version of “A Really Good Time” in 2005 with producer David Houston but it got but on the back burner when we relocated to Portland.  When we heard Burning Sky was going to do a Roxy Music tribute we sent them a rough mix of what we had and they liked it enough to give us a tentative slot on the compilation if the final mix was good. Apparently it was and they decided to release it with the deluxe edition of the comp and we’re very grateful.

Most of the bands you list as influences on your Facebook page are groups or musicians that were in the prime of their career decades ago.  Are there any current bands that influence you?
KIRK: There are a few like Best Coast, The Strypes, Ex Hex and Amy Winehouse but most of them were also influenced by artists from decades ago as well. I also dig Ty Segal & Courtney Barnett but they seem to have a little retro influence too.  The majority of current mainstream music in America just doesn’t seem to have much feel or artistry in it. It seems more like a product than an art form.  I think songwriting and rock music hit its peak in the 1960s & 1970s. The basic musical styles from those decades seem to continually influence musicians more than any other time period. There are new bands coming out like The Cry, The Stypes and The Reverberations that are hugely influenced by that era but they weren’t even born until the 1990’s. 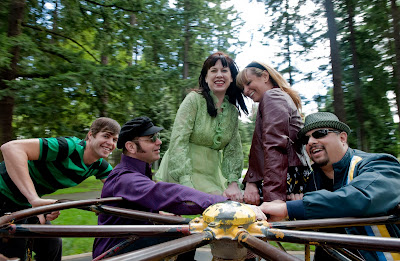 I always hear golfers say that there are so many “life lessons” to be learned by playing golf.  What do you suppose are some “life lessons” people learn by being in a band?
KIRK:  You definitely learn how to get along and be creative with other people. That can be tricky sometimes. Especially if you’re all crammed in a van together on tour for a month. You also learn just how much you love playing music. For most indie/DIY bands there is a lot of time, energy & money spent for a few hours a month playing for $50. If you don’t have a burning love for playing music you’re going to get out fairly quick.

What is the single best piece of advice someone has given you that you actually followed:
KIRK:  That’s a tough one. Probably “Don’t piss off the sound Man”! If they don’t like you they can make you sound terrible which is really bad for your band.  I usually try to make friends with them right off the bat.

Where can people go or log on to hear or buy your music?
KIRK: You can get our CDs, Vinyl, or downloads from CD Baby or Amazon. Downloads are available from iTunes. There are some brick & mortar stores that stock our stuff or you can have them order it through Alliance Entertainment distribution.

We have a lot of songs and videos posted at www.beyondveronica.com and our Facebook page. You can also listen to all of our releases on Spotify.


What lies in the near future for Beyond Veronica?
KIRK: We’re currently working on our 3rd album. A lot of the backing tracks are done but progress was delayed due to a fire at our studio. That’s mostly repaired now so we should be back recording any day now.

We took a little break from live performances during the first part of 2015 but played Portland’s annual Nuggets Night garage rock tribute in May and have begun booking shows for the future.