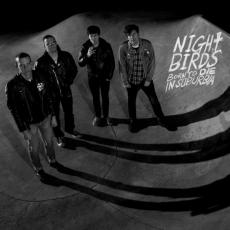 Night Birds – Born To Die In Suburbia LP (Grave Mistake Records)
In the 90’s, New Jersey was a bottomless well of terrific Street Punk/OiI bands like The Bristles, The Wretched Ones, Those Unknown and the labels that housed them; Headache, GMM,  and Pogo Stick. So that’s kind of what I still think of when I hear about a punk band from Jersey.  Somewhere along the line, tides shifted.  Night Birds are here and do a searing Posh Boy/Hostage Records sound that commands consideration.  With one LP and a hand full of 7”’s prior, this seems to be their strongest effort.  The sound is better fortified, leaner and meaner!  I love the way the instrumental surf punk scolder opening track Escape From New York melts into the second title track.  It’s like crossing the street, being hit by an eighteen wheeler, only to wake up thankful to be barely alive stuck splattered on the radiator grill.  As the feeling of gratitude continues you suddenly realize the whole mechanical ogre is going off a cliff with you at the head.  I guess what I am trying to say is, this record is indeed the deliverer of the goods! – Jay Castro

How does a band from New Jersey sound like they would have been right at home in Southern California punk scene circa 1980-1985? I don’t know, but they have done it and have done it exceptionally well. Born To Die In Suburbia seems like a lost album from the early Frontier Records catalog. Back when the label released Circle Jerks, T.S.O.L. and Adolescents. Night Birds have nailed the sound of the three aforementioned bands as well as the early D.I. catalog without sounding like a cheap cover band. For fans of that era of Southern California punk, your band and LP have arrived! Buy now or be sorry you didn’t. – Ed Stuart 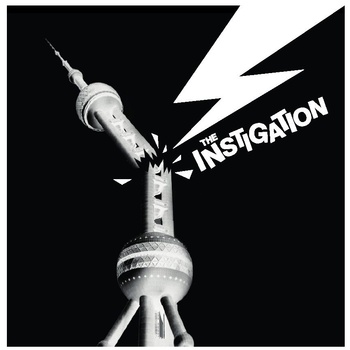 
The band is based in Tokyo/Shanghai, employs a British Singer and describes themselves as garage hardcore.  Sounds cool already huh!?  The “garage” in the description I assume comes from the sonic assault that’s delivered in a slight lo-fi manner, which I think gives the songs a bit more crunch to them.  Don’t fret, there is still hardcore a-plenty here to be found here, including a cover of Black Flag’s White Minority.  Since the singer has that British accent in his cache, the songs come off with a Conflict/Crass resonance and urgency, minus the agenda.  I don’t get in the mood for this type of music too often, but next time I do, rest assured I’m reaching for this sharpened slab of wax! – Jay Castro

Japanese hardcore that leans heavily towards UK 82 bands like GBH and Varukers, but with a guitar player that adds a layer of garage Rock N’ Roll leads over top the hardcore tempos to add a twist. The Instigation takes the style and sound of the aforementioned bands and speeds up the velocity. Think more Insted style hardcore than Youth Of Today with a touch of Henry Fiat’s Open Sore thrown in. – Ed Stuart 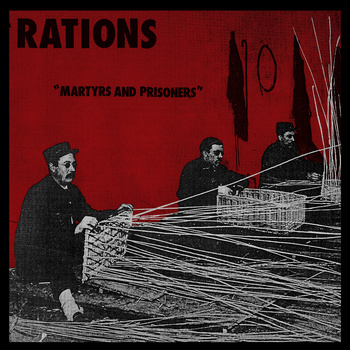 The back-story on this EP is that 86’d Records teamed up with about twenty to thirty other labels globally to put out this release. Now if this doesn’t show the community aspect and spirit of DIY within the punk community, I’m not sure what does. Martyrs and Prisoners is equal parts Fifteen, Crimpshrine, Fugazi and early Jawbreaker. Rations shows a little more of their melodic side and willingness to experiment sonically on this EP without losing focus on the punk/hardcore, dual vocal mainstay that has worked so well for the band on previous releases. – Ed Stuart 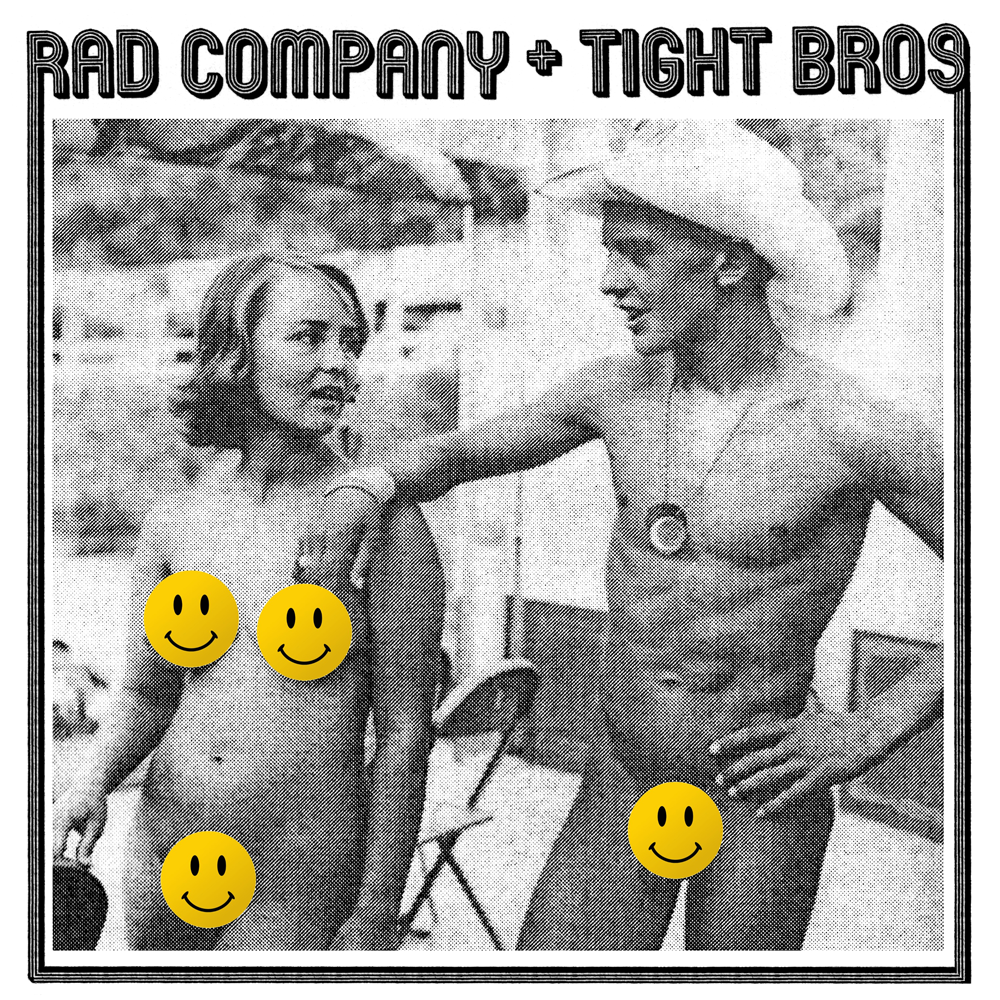 Rad Company/Tight Bros – Split 7” (86’d Records)
Rad Company plays melodic pop punk in the same vein as bands like Dillinger Four, Sludgeworth, Weston and Lawrence Arms. A catchy blend of hooks, chugging crunchy guitars and double vocals that is the both the meat and potatoes of the band and driving force behind the band’s sound.
Tight Bros. on the other hand starts their side with a garage punk stomper that features a power pop style chorus that feels reminiscent of Nick Lowe/Dave Edmunds. While their second song of the side, “Trapped In My Head” sounds like Briefs style punk. Catchy, new wave influenced pop punk. – Ed Stuart

With an album cover like this one I would have completely dismissed it as a gaggle of high school saplings crooning about the time they became intoxicated and soiled themselves at a party in front of the head cheerleader.  I was pleasantly surprised to find this was not the case at all!  Rad Company charges right out of the gate with a gust of Mid Western melodic punk in the Sludgeworth or Pegboy approach.   Tight Bros. has a bit more or a retro strut in their step while still thundering forward through their edition of punk pop songs.  A tad more guitar hook with a new wave/glam feel differentiate the Tight Bros. songs.  Both bands have a slight fade of their influences in their music, but you can tell they subscribe to the “Just drop the hammer and rock” school of thought, which is great!  Gimme more please! – Jay Castro The Condors – 3 Item Combo CD – (Vital Gesture Records)
One of the things I have found reviewing the records here for Audio Ammunition is how many terrific bands are out there rocking in obscurity.   Reading a lot of blogs and zines that cover “underground” music I tend to think “well if anyone is that good, surely I would have heard of them by now”.  So not the case!  Take for example this wonderful third LP by the Condors.  It rocks in a Joe Jackson and Elvis Costello manner that sounds inspired and doesn’t fall into the copyist closet.  Likeable songs written about straightforward subjects and human emotions, the way rock n roll is supposed to be.   Sometimes you want to put on a record and let music drive you out of a bad day.  The Condors are there right there to start the engines! – Jay Castro

On the third LP, The Condors write the songs that make any fan of American power pop proud. The band employs a clear focus on melody and song craft incorporated with bits of blues, Rock N’ Roll and up-tempo punk thrown into the mix. Heavy Plimsouls influence with parts of Graham Parker and Byrds type harmonies sprinkled on top. – Ed Stuart 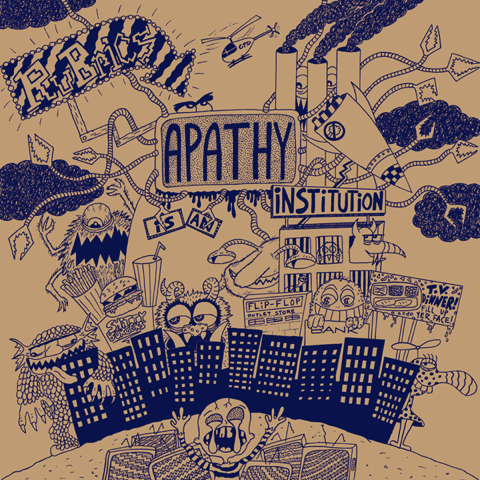 Rubrics – Apathy Is An Institution LP – (86’d Records)
Rubrics mix punk, metal and hardcore with a healthy dose of politically and socially conscious lyrics. Propagandhi, Lagwagon, 88 Fingers Louie, Strike Anywhere, Fifteen and Avail influences can be heard throughout the LP. Apathy is reminiscent of that late 90’s/early 2000’s Fat Wreck era guitar sound and songwriting, but features a dual guy/girl vocal attack to get their message across. – Ed Stuart

Searing hardcore that reminds me of Propagandhi with a mix of F.Y.P. cut into it.  Not just with the sound, but Rubrics lyrics also have a sarcastic, socially conscious quality to them as well.  The vocals and guitar don’t always follow the straight path laid out by the rhythm section.  They playfully stray and do their own thing at times, which gives the music a bit more of a sloppy/playful feel and is more fun to listen to.   So instead of having someone shoot an arrow at your face, imagine someone under hand tossing a cinder block at your head.  The outcome is the same, it’s just the delivery that’s a little messier! – Jay Castro

Posted by Audio Ammunition at 3:32 PM