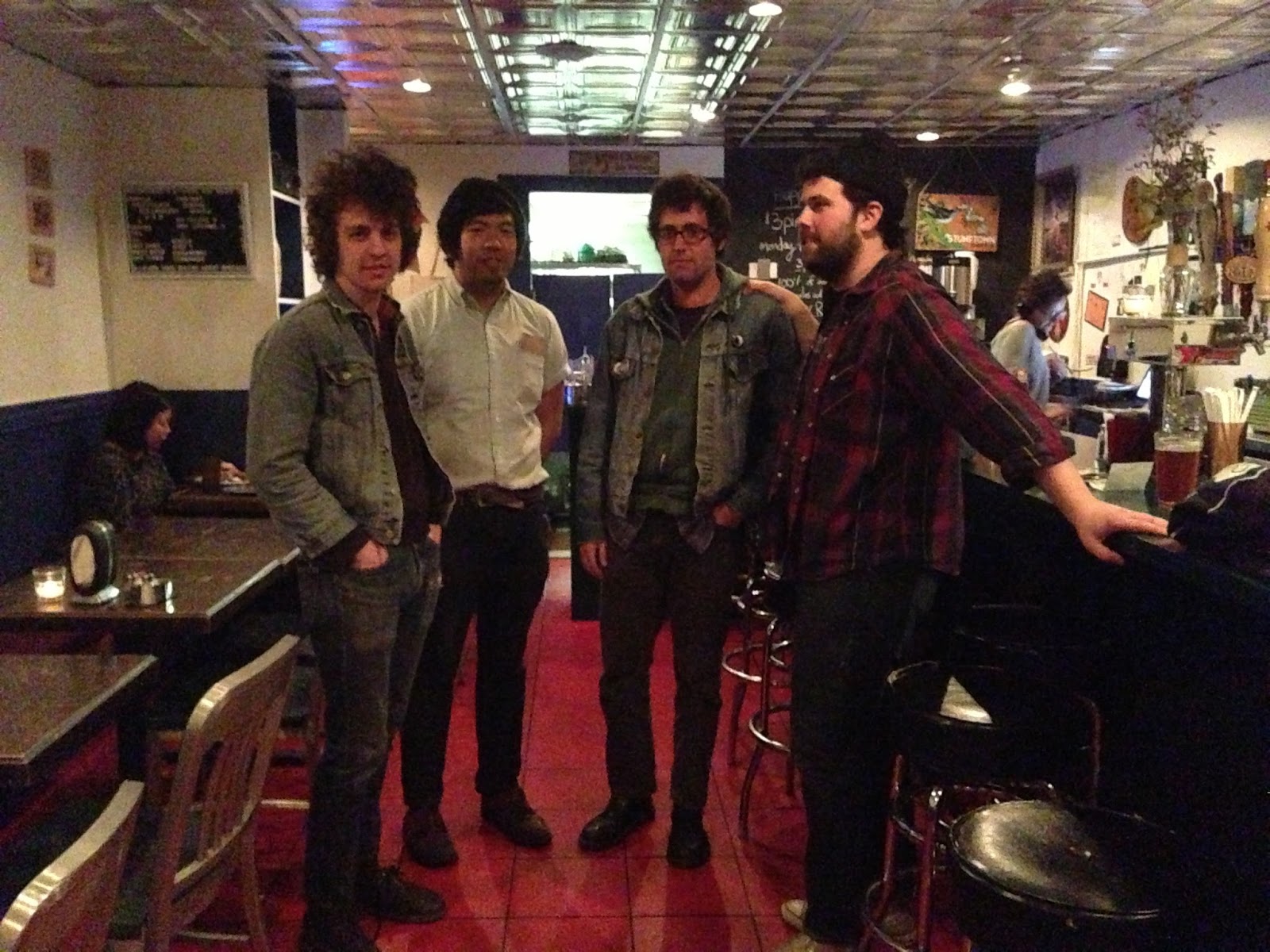 At this point, Nude Beach seems to be on a similar path as The Replacements. Their origins playing together in punk bands since high school is showcased in the band’s punk infused songwriting heard on their demo tape and first LP I.  A change of direction with the release of II, and their brand new single “What Can Ya Do,” Nude Beach have displayed their musical leanings toward American style power-pop and Rock ‘N’ Roll. Calling from the likes of The Replacements, mid-period Jam and early Bruce Springsteen and Tom Petty, Nude Beach has created a sound that focuses more on melody and craft that would not be out of place in the mid-1970’s and is just as vital today.

Where is the band from?
Brooklyn, NY

Who is in the band and what instrument do they play?
Chuck – guitar and vocals
Jim – bass
Ryan – drums and vocals

How did the band start?
I was living in Brooklyn for a few months and spending a lot of time on Chuck’s couch.  Ryan would come over a lot too, and we’d hang out drinking beers, listening to music, and occasionally mention playing together.  We had all played music with each other in various projects in the past, and none of us were in a band at the time, so it transformed from something we’d talk about to an actual band pretty fast and was a fairly natural process.

In an interview with The Phoenix, it was mentioned that “met in high school on Long Island while playing in punk and hardcore bands like Guadalupe, Dustheads, and Religious Knives.” There have been quite a few musicians that have started in punk and then moved to a power-pop band. For example, Gentlemen Jesse was in the Carbonas and Ben Cook, who was in Marvelous Darlings, is currently in Fucked Up. Does the band have any thoughts on this progression from punk to power-pop especially in regards to Nude Beach?
I don’t really think of it as a progression in the sense of leaving punk behind.  At least personally, I continue to listen to a lot of punk and hardcore bands and go to shows on a regular basis.  Ryan, our drummer, plays in a hardcore band called Warthog. I live in a big punk house that has done shows for years, so I consider it something that I’m still interested and involved in, rather than something I’ve moved on from.  In terms of the way our songs have progressed from album to album, I think it’s a matter of being fans of music beyond the sometimes narrow scope of punk, being into collecting records to some extent, and embracing a variety of bands, records, genres, etc.  Sure, we like power-pop and more straightforward Rock ‘N’ Roll, and our songs touch on those influences because we’re fans.  We never really identified with one genre over another in the first place, and just try to write good songs.

In the same interview, it was stated that the band’s “aesthetic change was mostly inspired after writing the song "Walkin' Down My Street."” What was about this song that “kind of bridged the gap between our first record, which was more punky, and the second record, which was more melodic, with more hooks." What was it about that song that the band realized a new direction?
We didn’t sit around and talk about a new direction for the band-- things progressed pretty organically. With our demo and our first LP, save for a few, most of the songs were fairly short, fast, and straight to the point. I don’t think any of that stuff was lacking in melody, but “Walkin’” was the first song we worked on that would eventually appear on “II” and I suppose it was kind of a test of whether it would work to really embrace some more traditional rock and roll aesthetics—the song isn’t that fast, it probably sounds more like Bruce Springsteen than The Clash, and there’s a long guitar solo. We had a lot of fun playing stuff like this and maybe “Walkin” signaled that it was fine to just go for it, but ultimately it was never much of a conscious decision.

It seems like the original goal of the band was to play house parties in the Brooklyn, but the band has surpassed that. What are some of the new goals of Nude Beach?
We’ve toured a lot in the US—we want to start getting to Europe, Japan, and wherever else people might be interested.  Chuck writes a lot of music, so just recording more and putting music out as much as possible.

If you could choose two out of these five bands/musicians to have in your record collection which ones would you choose between Elvis Costello, The Jam, The Replacements, Tom Petty or Bruce Springsteen?
I can’t speak for everyone in the band, but I would choose The Replacements as my number one by a landslide. They’re pretty much an ideal band in my mind. Springsteen would be second, and gets the slight edge over Tom Petty just because I think more of his records are consistent from start to finish.

Following up to the previous question do you feel any of these bands have influenced Nude Beach at all in sounds and/or songwriting?
A lot of people mention the Costello influence in reviews, and I get it on some level, but I can’t say we ever really sat around listening to “My Aim Is True” on repeat, or even talking about him much at all. Don’t get me wrong, some of those Elvis records are great, but in terms of influences or ideas kind of seeping into our heads, it’s probably coming much more from other places. We like all the bands you mentioned and think they’re great songwriters, but there’s a pretty wide range of bands and songwriters I feel just as inspired by—and you could get five different answers depending on which of us you talked to. We all like Big Star.

One of the best Nude Beach shows the band has played so far?
House show in Flagstaff, AZ.  We had no expectations going into it and had never heard anything about the music scene in Flagstaff.  We went there on a whim and played in a cavelike basement to a bunch of sweaty, booze and drug-fueled freaks who were dancing like crazy.  The show was a wild party and we were really well received.  Any time we’re out on tour and think the show could be a bust, then get surprised by something like that out of the blue, it’s pretty memorable.

How did the band link up with Tom Scharpling, who directed the “Some Kinda Love” video? Was the pop-up video idea the bands or his?
The Scharpling video came about because Other Music had let them shoot some stuff in the store a few years ago.  They already had a friendship and working relationship through that, and I think they sent Tom our record and asked him if he’d be interested.  He agreed to it and came up with the idea pretty quickly.  I’m a big Best Show fan so I was excited, and he was super fun and easy to work with.  Granted, I’m not sure what kind of video stars we are.  Probably faces best left for radio.

How did the band become associated with both Other Music Recording Company and Fat Possum?
We recorded “II” in our practice space and put it out ourselves in March of 2012.  We were mailing copies out for distribution and Ryan, who worked at Academy Records at the time, was literally walking from record store to record store trying to sell copies.  Other Music bought some, and sold them pretty fast. Then they bought some more, and they sold just as quickly. They were starting the record label around this time, and I think were looking to put something out by a NY band.  The record was doing pretty well at the store and the Other crew seemed into it, so they contacted us about doing a wider release through their new label.  It was a small operation, local, and they seemed genuinely interested in us, so that relationship developed easily.  Fat Possum is kind of their parent label and handle some of the business and distro work, but we’ve actually gotten to know those folks well too, and have had a lot of fun playing and partying with them down in Oxford, MS where their whole operation is based out of.

Jimmy was quoted in Stereogum about being interested in “DIY models for music releases, distribution, and sustainability, and think there are a lot of possibilities for bands and musicians on that side of things.” 50 years ago people used to buy music and get their water for free, now people pay for water and get their music for free. How do you think this affects music in any way?
It’s a mixed bag.  Mainly because of the internet, music is incredibly accessible today and people are exposed to a much larger variety much more easily than at any prior point in time.  It’s also much easier to record and release music than at any other point.  This democratization is interesting and has produced some really cool work, but it also seems to engender hyper-specialization and self-identification with micro genres— chillwave, witchhouse, nu-, post-, psych-, whatever—with pretty mixed results.  It also seems to encourage a lot of overinflated hype, flavor of the week bands, and I just wonder how much, if any, of this time period’s music will have lasting meaning for people.  I’m all for the collapse of the old record industry and anyone being able to get their own work out there, but maybe there was something about having to bust your ass to get your music heard in the past—be it on a big label or a DIY cassette release—that weeded out crap the way that instantly uploading a Garageband file to Bandcamp doesn’t.

Where can people hear the band?
Well…  Bandcamp, actually.  http://nudebeach.bandcamp.com

What’s next for Nude Beach?
Recording our third LP this summer, then more tour dates in September

Posted by Audio Ammunition at 1:57 PM