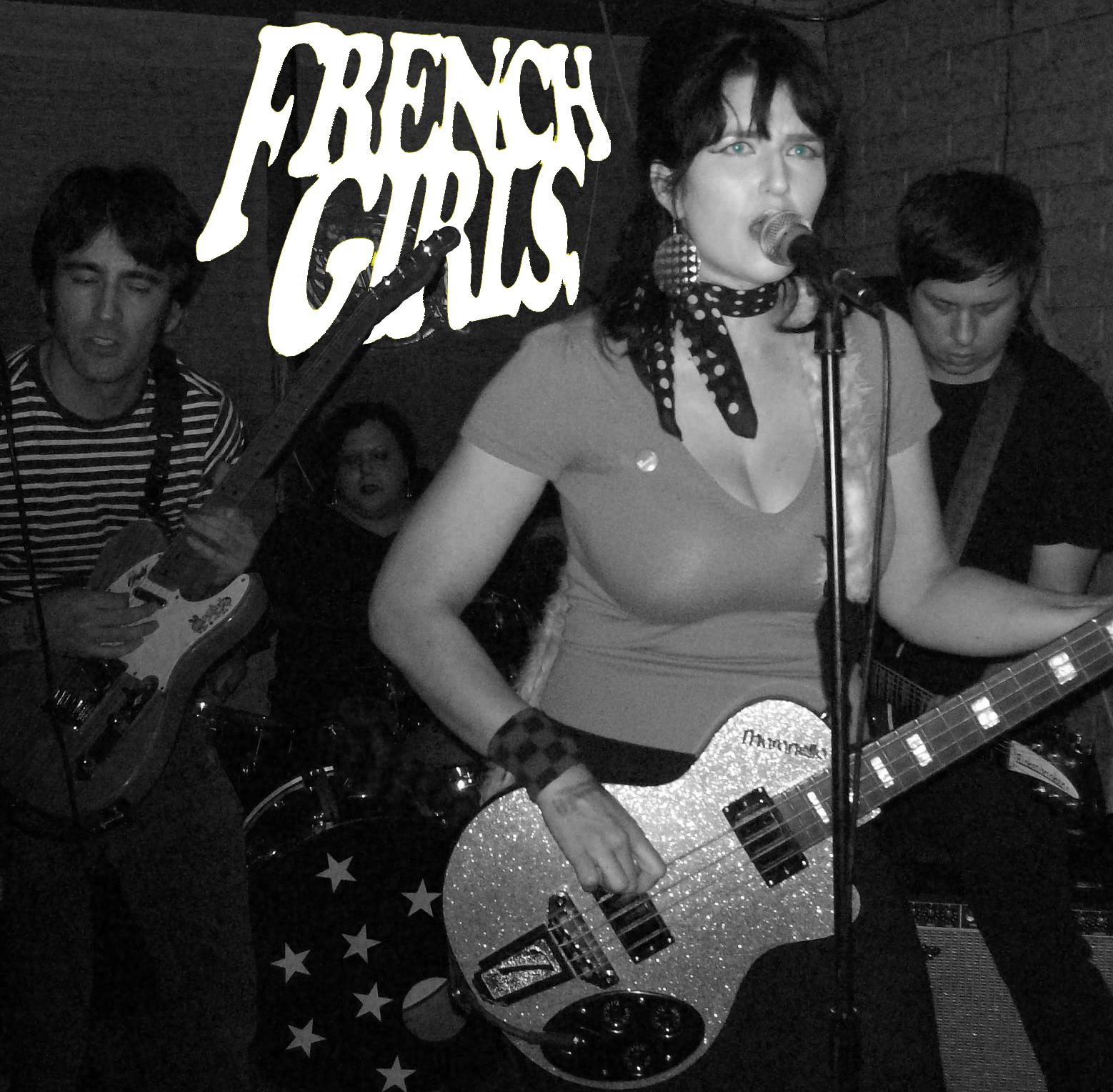 The term “punk” has gotten to be such an all-encompassing term these days.  Used to be you’d throw that word out, and you knew pretty much what you were getting.  Now days, it means so many different things to so many people.  When I hear that word used in a band’s bio description of themselves, I can only hope to hear a band that sounds like French Girls.  They take the bits of punk that expose their rock n roll and nerves like The Damned or The Vibrators.  A jumble of that crushed in with some 90’s Rip-Off Records underlining and you have yourself a force to be reckoned with!

Who is in the band and how do they earn their keep in it?
Chela: I play bass guitar and sing. As far as earning my keep, I think they just keep me around for a good laugh.

Mike: I play the guitar and yelp a bit.

Donald: I play the guitar and am a fellow yelper with Mike.

Amy: I play drums and sometimes let out some screams.

The band is currently in Phoenix, but where are all of you from originally?
Chela: Cave Creek, AZ

Mike:  I lived other places, but have been here for a while.  I think I'm from here now.

Donald: I'm originally from New Mexico, but have lived in the Phoenix area since about 1995, so I am basically a Phoenician at this point.

Amy: I am from the Cleveland area, originally.

What is French Girls origin story?  When and how did you all meet and come together?
Chela: Amy and I have been playing in local bands together for years and have known Donald for a while. Mike and I had played together in a band together a few years back so when the time came that we were all looking for people to play with French Girls happened!

Donald: I was in a band that had just gone its own way and was looking for a new project. I had previously known Chela and Amy from the music and art scene, so when Amy posted about looking to start up a new band I jumped at the chance. Mike was also interested in playing so instead of us having a guitar duel to the death, Chela and Amy decided to keep both of us. This is something I am very happy about because I think Mike and I complement each other on guitar very well.
What influences did you have in mind when starting French Girls?
Chela: My influences are more style driven than specific bands. I like a good, short song. Under two minutes is nice. I am into music that gets to the point and leaves people thinking, "That. Was. Awesome!"

Donald: I think we all have different influences that we bring to the band, but in particular to what makes our sound I know that I look at older bands like X, and Suzi Quattro for inspiration.

Amy:  It was nice, we didn’t have any preconceived ideas. We all love music and share plenty of common interests but also have different things to share with each other and explore as a band, so it’s pretty cool. Our primary goal is to ROCK!

I read that out of all different art forms, music has the power to alter a person’s disposition the fastest.  Do you agree with this?  Do you have any favorite music that you can put on that will always lift you up from a slump?
Chela: That sounds accurate. Weird Al usually gets me out of a funk.

Donald: I completely agree with that statement. For me, there are many things that can get me out of a slump, but the first thing I can think of is 90's gangsta rap like N.W.A or Snoop Dogg. It probably wasn't their intent when they wrote it, but that always puts a smile on my face.

Amy: For sure! Donovan. Donovan makes me happy. I love that dude.

You currently have a couple teaser songs streaming right now from an upcoming EP.  Can you tell us a bit more about it?
Mike: We recorded some songs ourselves and just wanted to get a record out.  It'll be a 4 song, 7"EP and we should have the records soon.

One of the songs Aerobicise has a voyeur theme to it.  Is this an issue with you guys, either doing the creeping or being creeped upon?
Chela: Teenage boys create their own woman. They want her to play chess, shower with them, and AEROBICISE.

Donald: Besides music, and also to add on to what Chela just mentioned, we are also influenced by movies. The 80's movie Weird Science would probably be considered one of the French Girls biggest influences, so much so that we even had a "Weird Science" movie night. But as far as being creeped on or creeping on, I think with being on stage you kind of learn to deal with that stuff, to the point of almost not even noticing. This song was just looking at it from a teenage boy’s perspective without regard to our own experiences.

Amy: We’re all creepers and have been creeped upon, to some degree, right? We like presenting some different perspectives on the issue of creeping. Don’t ever say French Girls aren’t deep.

If French Girls could tour with any band/musician from times gone by, who would it be and why?
Donald:  The Rolling Stones, I'm sure they saw more stuff than anyone else can imagine. Not saying I want to experience it myself per se, but it would be cool to watch all the stuff going on as an opening band touring with them.

Amy: The Who, early years. Can you imagine? I can and have many, many times.

What has been the most memorable show the band has played, good or bad?  Where was it and what made it so unforgettable?
Mike: We played this show with King Tuff and Audacity in a warehouse last summer.  It was super packed, crazy fun and insanely hot, even by Phoenix standards.

Donald: We played a show in Tempe at the Yucca Tap Room, where we had a ton of kids dancing and literally spilling their beer all over the floor making it very slippery. Everyone walking by was falling or trying not to fall. Fortunately for us we were on the stage, but the bass player for the next band decided to stage dive while they were playing their set and he busted his head on the floor. I couldn't even tell that he was bleeding, I thought he was just wet from all the beer. Needless to say, that was one of my most unforgettable nights.

Amy: There have been so many! For me, the ones I love the most are rooms where we are crammed together in a corner of a room surrounded by people. There’s something about those confined spaces that, I think, creates a really exciting energy.

I read an interview with Keith Richards where he said that anyone buying digital music is getting short changed.  Do you agree with this and if so, why?
Chela: I think the people that like vinyl, CD’s, tapes, etc. will always buy that stuff. I think it is great that a lot of those formats now include digital downloads with the purchase. I love album art. People are missing out on some cool visual experiences when they download just the music.

Mike: Listening to music is an experience that is first person and so often people relegate it to the background.  Some of my favorite memories are lying on the floor with headphones listening to an entire record while staring at the pictures and carefully reading the lyrics on a gatefold jacket.  It's sad that some folks have never experienced music like that.

Amy: Basically what everyone else said; I never feel like a tangible product is inconvenient or invasive, so it’s a bummer that they are sort of viewed that way now, by many. I still feel like the more information and artwork that comes with musical output, the better. It’s never not been exciting to me to unwrap an album, ogle it and feel it up a bit.

I don’t like using the term “guilty pleasure” because I don’t think anyone should be made to feel ashamed of anything they like.  However with that being said, what to you listen to that you think a lot of fans may be surprised by?
Chela: I love the song "Ghostbusters" by Ray Parker Jr. I mean REALLY love it.

Mike: Jeeez...I like everything so... uh. I really like the Josie and the Pussycats soundtrack. I'm not embarrassed, though.

Amy: I’m not at all guilty about it but I love Bruce Springsteen and for some reason that seems to surprise people. Why? I don’t know, but I always find it funny that it’s so odd to folks.

What does French Girls have in store for us in the near, or not so near future?
Chela: I would like to be the first band to do a world tour playing from a hot air balloon. It could happen.

Mike: We've got this EP coming out and then we'll hit the southwest on a bit of a tour and maybe a full length record in the fall.  In the meantime, we have a few shows booked in Phoenix.  People can keep up with us at...


Posted by Audio Ammunition at 2:06 PM