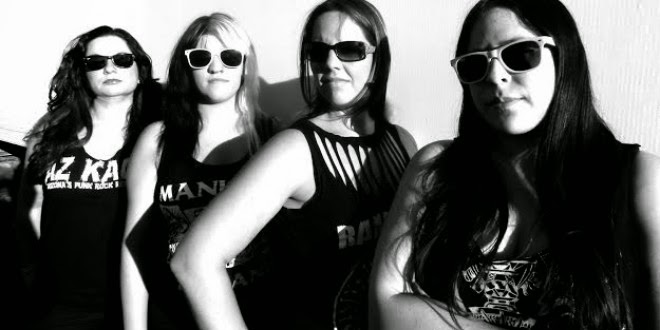 Venomous Pinks are an all girl punk band from Tempe, AZ. With that being said these four aren’t your typical twinkly pop punk princesses with spunky haircuts. In fact you might find a few of those types of people stuck in these girl’s boot heels. This band plays hard and fast as if they’re the Allied Forces storming the beach at Normandy. If you’ve seen this band live you know what I’m talking about. First you hear the vocals growl the battle commands; next the guitars come in relentlessly spraying sonic projectiles into the battlefield and whatever unlucky bastard is still left standing gets knocked on their face by the heavy guns of the drum kit. It’s a kill or be killed world out there and Venomous Pinks take no prisoners.

Who’s currently in the band and what do you all do in Venomous Pinks?
The Venomous Pinks are: Drea Doll – Vocals/Guitar, Jukie – Drums, Gaby Kaos – Bass, Corrie Zazzera - Guitar

Does being in an all female punk rock band still pose its unique challenges or do you feel the ground has more or less leveled out? If not what sorts of things do you feel Venomous Pinks endure that an all male punk band otherwise wouldn’t have to put up with?
JUKIE: We don’t put up with it anymore. We pretty much still get comments and predispositions that go along with the stereotypical characteristics of being an all girl band. It’s all in how you handle it. It used to bother me a lot when we first started out 4 years ago, but today it goes in one ear and out the other. We are established as musicians and if people can’t see past our gender then it is their problem.

On your Bandcamp page one of your tags is Riot Girl. Did Kathleen Hanna and the whole Kill Rock Stars scene of the 90’s have a big influence on you?
JUKIE: Last year Drea and I went to see her documentary, The Punk Singer. After viewing the film I was able to come to terms with being in an all girl band; it meant the judgments were never going to stop, and it isn’t worth getting all upset over it. We have it a lot easier today than the riot grrls did in the ‘90’s. What inspired and impressed me was how they handled it. Everything they went through made the movement stronger. Sometimes at shows we call on all the grrls to come to the front and rock out with us and it is amazing...it’s a tribute to the OG riot grrls and to all of our awesome female fans.

Venomous Pinks have opened up for a lot of legendary bands like The Adicts, P.I.L., Channel 3 and The Weirdos).  One of them was also The Queers, whose lyrics have been deemed somewhat sexist and homophobic by the “politically correct internet punk posse.” How do you feel about that?  As women, have you ever been offended by a bands lyrics or onstage antics?
JUKIE: Funny you asked us this. Lately we have been getting a lot of crap from people claiming we are not punk because we don’t sing about politics or piss people off with our lyrics. Apparently to some of our “judges” punk means having green hair and slamming down Mickey’s malt liquor while screaming into the mic about everything that is wrong with the world. To me, and my band mates, punk rock is about being who you are and owning it. It also means coming together and accepting one another for who they are. People’s inability to do that is unfortunate and ignorant. So if bands in the punk category want to sing about controversial subjects that may cause people to become angry and uncomfortable, that’s great...that’s what they identify with….and guess what? That’s probably what they want...to get a rise out of you. Speaking of playing with a lot of influential bands, there’s an old saying: “Don’t meet your heroes.” Have you ever come across anyone in all the bands you’ve played with that made you think that statement true or made you think “I really enjoyed this person’s music a whole lot more before I met them.”
JUKIE: Yes, this happened to me once after meeting a certain prima donna drummer at Punk Rock Bowling. Now when I listen to their music I don’t enjoy it as much, and it sucks because they are a really kick ass band. Out of respect for them, and their huge contributions and influences to punk rock, I won’t mention who it was.

Last year the band covered Hall and Oates “Maneater.” What led to the decision to record that song and what other kinds of music do you listen to that you feel may surprise some Venomous Pinks fans?
JUKIE: Drea and I were inspired by our former bass player to include this song in our set. We love a lot of old school rock n roll from the ‘80’s, ‘70’s, ‘60’s, and ‘50’s. That may surprise some of our fans...our love for music goes way beyond punk rock...back to the musicians who inspired some of our favorite modern bands. I enjoy listening to a lot of hard rock, metal and old school hip hop. My main love though is pure, raw, rock and roll; mostly the classic rock from the ‘70’s and alt/grunge rock from the 90s.

DREA: When I hear older songs, I hear the potential it could have to be a punk song. That’s basically what happened with “Maneater.” I brought the idea to the table and the girls were down to try it. There are a couple of older songs I’d like to cover some day.  As far as music goes, I like a little bit of everything. I think having a diverse music taste can help you grow as a musician. I love ‘60’s rock n’ roll like the Animals and Jimi Hendrix all the way to the ‘80’s with bands like New Order and The Cure. But my true love will always be punk.

Venomous Pinks have been around since 2011 and you’ve just released your second EP but the band plays out in the Phoenix/Tempe area quite a bit. Do you enjoy playing live as opposed to the meticulous process of making records?
JUKIE: Yes, playing live is so much more fun than being stuck in a recording studio. However, our last EP session was an amazing experience. We recorded at Villain Recording studios in Phoenix with Byron Filson...he is the man! I would record anything with him in a heartbeat.

DREA: Playing live and recording are both hard work. I equally love both. 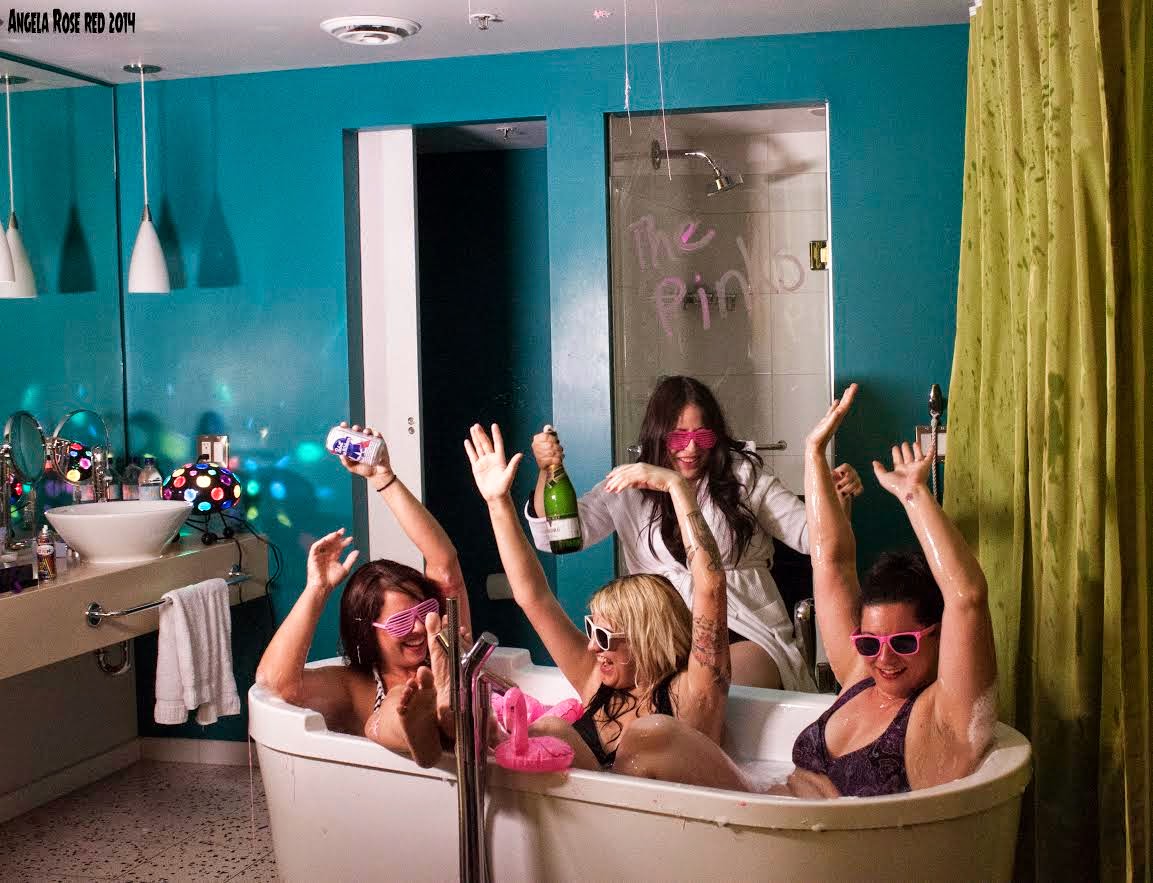 Like I said before, the band plays out quite a bit, can you tell me about the most memorable show you’ve played, good or bad and what made it so unforgettable?
JUKIE: The most memorable show for me was when we opened up for Betty Blowtorch at Hollywood Alley. Getting to share the stage with Sharon, Blair and Judy was incredible. It was even more special because it was at Hollywood Alley...one of my favorite places to play and the venue I played my first show ever as a drummer.

DREA: A memorable show for me would be our CD release because it had been a project in motion since April. It was really cool to see it come full circle. It was awesome how many came out and supported us. Thank you!

Where can people go or log on to get your music?
JUKIE: Pick a place...Xbox music, Amazon, iTunes, Spotify, our Bandcamp site….BUT the best place to get our music is from us at a show.

What can we expect from Venomous Pinks in 2015?
JUKIE: Expect more music videos, more out of town shows and an LP. Expect bigger shows and events from us. Expect an amazing experience when you see us play live that will leave you wanting to hear more. Expect the best rock/punk rock/metal/all girl (or whatever category you want to throw us in...we don’t care) band, The Venomous Pinks.