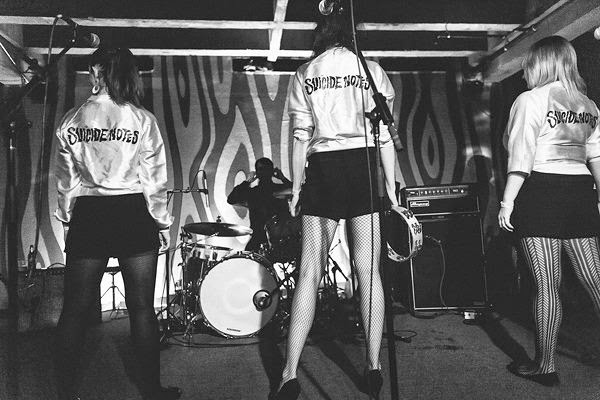 The Suicide Notes started as a recording project for Tim (of Epoxies) and some friends.  The fun soon couldn’t be contained to just one small recording space and a full band was formed to play live. Three female lead singers were brought in to belt out those dark lyrics while harmonizing like the Ronettes. A backup band was meticulously chosen from the local talent pool including members of the Mean Jeans and Pure Country Gold. Suicide Notes play music in a fun, frantic ‘60’s girl group style only with some slightly demented lyrics. If you want another sense of what this group is like: imagine you’re on a hell bound train with Joey Ramone wearing the conductors cap while listening to The Shangri-La’s as you’re plummeting into the abyss. With lyrics like: “Life is about choice so i choose death so I don't have to see your face and smell your breath.” It’s this bitter and sweet dichotomy in their music that makes them so unique. However humorless squares: find your kicks elsewhere!

Let’s start with introductions: who are the Suicide Notes?
TIM: Name's Tim and I play drums and write songs. I also provide the rehearsal space and keep the fridge stocked with beer and the cupboards full of red wine to enhance an otherwise drab practice environment. Then we have Jessi Lixx, Double A and Miss Jo upfront on vox, Petey J Cool on guitar and our newest addition, John Cox on bass.

As a kid, do you remember what or whom made you want to write and or perform music?
TIM: I think the Damned had the greatest impact on me as a kid. Musically and visually they covered so many bases that it was impossible to avoid being heavily influenced by them. Van Halen also blew my mind; the first two records are fully insane.

The Suicide Notes sound: Maximum Rock N Roll said you sounded confused but melodic enough to forgive (whatever that means) you’ve been compared to B-52’s, The Go-Go’s and The Shangri-La’s. How would YOU describe your sound?
TIM: Those comparisons seem fair enough, I know ideas have been directly lifted from at least one of those bands. As broad as the term is these days, female fronted power-pop is an accurate description. We are six members who like a variety of genres so there's still room to wiggle in that description. We write music that we like to listen to.

The scene you guys have going on in Portland has become almost difficult to keep up with, great stuff seems to be coming out of there all the time, at least that’s what it seems like to an outsider like myself. Can you describe what it’s like being a part of that and is it becoming increasing difficult to keep your heads above the water so to speak?
TIM: It's always a challenge to remain relevant in this town. With the current migration, closing of venues and rent increases it's becoming a different monster. Lotsa cute bands are emerging- the civil war look is running rampant and it's almost impossible to avoid being offered smoked ice in a glass of whiskey. Keep it simple, a step above well liquor is fine but don't always go for top shelf. As long there's some dirt left around town we'll still have a pot to piss in. 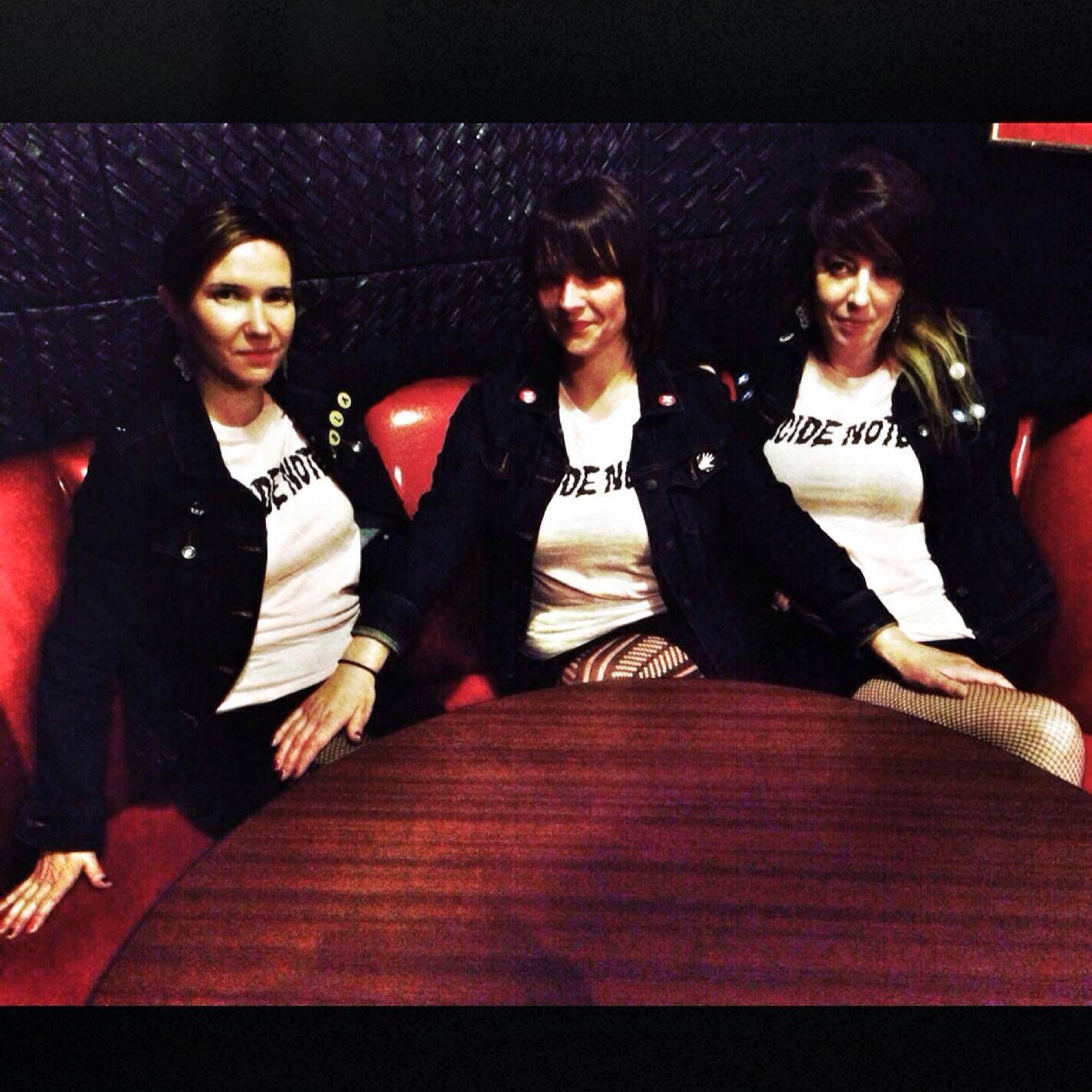 The two EP’s you have out (S/T and Hey Baby) are both on Hovercraft Records, how did you guys hook up with those fine folks?
TIM: Tim Janchar proprietor of Hovercraft records and current bass player of Hey Lover took notice and kindly offered to release a couple singles. He WAS a friend of a friend who became a friend. The personal touch is nice.
He makes great sacrifices to push music he believes in. He's a rare breed and a necessity to keep a solid grass roots scene up and running. I could S his D all day but let's move on.

Tim, legend has it you started The Suicide Notes simply as a recording project. What led you to decide you wanted it to become something more: curiosity more than anything?
I never really imagined the Suicide Notes as anything more than a recording project but Lixx scrounged up Petey J Cool (Pure Country Gold) and Howie Doodat (Mean Jeans) and we made it happen. Recently Howie left and was replaced by John Cox (Satan’s Pilgrims, The Pynnacles) who is also a mega-shredder, we're fortunate to have such talented friends. I was also itching to play out again.  Recording is so fun and so creative but accomplishing a balls out live performance is what helps me sleep at night.

So Tim, there have been many a relationship laid to ruin due to being in a band with your spouse. What is it like for you being in a band with your other half and was there ever a concern when starting The Suicide Notes?
TIM: The relationship hasn't really been an issue, having said that when there are creative disagreements I'm more likely to push things into argumentative territory. She's good at diffusing that and starting irreconcilable and unending song writing warfare but in the end it's nothing that a stimulating game of mixed doubles at the racquet club won't cure.

This is the part of the interview that I like to call “The Fantastic 4” or “4 questions I stole from other interviewers” Here it goes:

4.     What band or musician's picture was the first to get hung up on your bedroom wall?
TIM: Farrah Fawcett predates all band posters-I feel she deserves a plug.

I was reading this interview with Nick Cave and in it he said he felt that music, out of all other art forms, can change a person’s mood the fastest. Do you agree with this and do any of you have a favorite record you pull out when you want to be lifted out of a bummer mood?
TIM: Yep I agree that music is the most visceral art form. Recently I listened to Machine Gun Etiquette and it made me feel pretty good. Sometimes the best records put me in a "bummer mood;" sometimes being down is really uplifting.

Outside of music, do any of you have any hobbies or interests?
TIM: Well honestly music does absorb a great deal of my time. It is my main hobby and interest but occasionally traveling, surfing and vintage furniture hunting get in the way.

What lies ahead for The Suicide Notes for the remainder of 2014 and 2015?  Can we expect any new records?
TIM: Since 2014 is about done I'd say nothing, although we’ve had a super fun year. This last Spring we all jumped in a van and went on a “Mission to Sun Tour” to California with my (Tim) other band Sex Crime and we played a bunch of rad shows w/Maniac, Kepi Ghoulie, White Murder, The Stitches (+more!). We also had the honor to open for the legendary band The Sonics here in Portland this last October. We’ll be ending 2014 playing Seattle and Portland with LA’s The Muffs, which we’re super stoked about. For 2015 we're planning a completely non-music related trip to Hawaii and an ever elusive full-length record release coming to a store near you.
Follow @AAmmunition