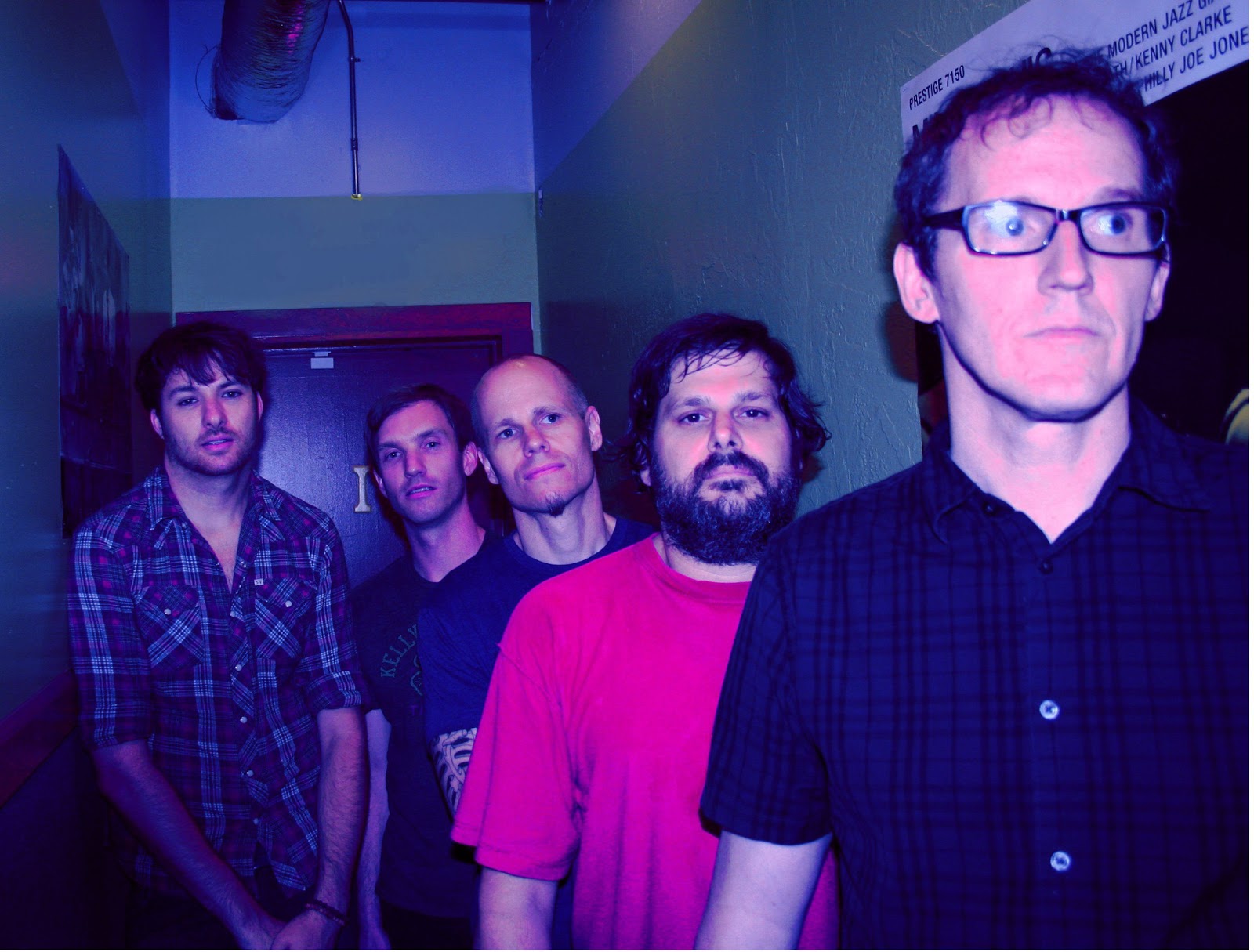 After hearing the Breakup Society for the first time, I felt ashamed that I had never seen them play live.  I truly believe they are one of Arizona’s best kept secrets. The band cranks out power pop rock n roll in the same school as Dramarama, Buffalo Tom, and The Replacements.  The band has 3 consistently great full lengths with the legendary Get Hip Records.  With comedic, cynically introspective lyrics and a barrage of guitar volume, this band deserves your attention, your time, and your attendance!

Who’s answering the questions here?
This is Ed Masley. I sing lead, play guitar and write the songs.

Is the band originally from the Phoenix area?
That question is more complicated than it seems. I’m actually from Pittsburgh but I flew in with two members of my former band, the Frampton Brothers, to make an album with producer Bob Hoag, also formerly a Frampton Brother, at Flying Blanket Recording in Mesa. In the process of making what was meant to be a solo record, the Frampton Brothers imploded, and I was starting to dread the idea of putting my own name on that album, “James at 35,” because I was worried that people would maybe assume it was more of a singer-songwriter deal with just my name out there. So, I needed a name. And the Breakup Society struck me as a cool way to acknowledge that the guys who made that album packed with breakup songs had broken up while making it. So, we were kind of born in Mesa. But I was still living in Pittsburgh, so I formed a Breakup Society there and that first lineup stayed together for several years until I moved to Phoenix in 2006 and formed a new Breakup Society here.

When starting the band, did you have a particular sound or artist in mind?
That first album, “James at 35,” was meant to be a straight-up tribute to the power-pop recordings of my youth because the subject matter of the first half, in particular, was just very nostalgic. But I’d pretty much abandoned that idea by the time we did our second album, called “Nobody Likes a Winner.” I’ve always liked the idea of being a rock and roll band, like the Beatles, where you write a song and that’s the song. You don’t worry about what genre you’re supposed to be. You just play music.

At a young age, what bands/musicians inspired you to want to pick up an instrument in the first place?

The Beatles changed my life. I had horrible taste in music until I saw one of their movies (“Help”). The Beatles had been broken up for years by then but they still hit me like the revolutionary force they are. That got me into the British Invasion and Dylan so I was immersed in all this music from another era (the Kinks, the Beatles and the Who, in particular) when the punk/New Wave thing kind of rocked my world just as I was writing my first songs. So, I can’t help but gravitate toward filtering those ’60s sensibilities – that sense of songcraft – through the attitudes and some would argue sloppiness of punk and New Wave.

You recently opened up for Soul Asylum.  Out of any local band, I can’t think of anyone better suited to do so.  How did that go?  Were you guy’s fans of theirs prior to this?
That was probably my favorite show I’ve played since moving here. I was a big fan in the “Hang Time” days and I think that new album’s everything you could have wanted it to be. They had to play that show without their drummer, who was having trouble with his leg, and they were just amazing, rising to the challenge of carrying on with the show despite the lack of drums.

The song “The Way We Weren’t” on your newest album So Much Unhappiness, So Little Time was written in collaboration with singer/songwriter John Wesley Harding, how did that relationship come about?
We had opened for John Wesley Harding in Pittsburgh and struck up a friendship. Then, he emailed me in Phoenix to ask if I could play one of his Cabinet of Wonders shows in Pittsburgh. I said, well, I can’t afford to fly to Pittsburgh for one show, but while I have your attention, would you wanna write a song together? I’d written the music to that song and didn’t feel like I could do it justice with my darkly comic sensibilities. It had that whole ’70s Lennon vibe and I was thinking he might have a better shot at coming through with something closer to “Imagine.” So instead, he wrote “The Way We Weren’t.” And I was glad he did. In fact, I can’t believe he beat me to that title. And it suits the album better than a song more in the spirit of “Imagine” would have.

I noticed you count The Mr. T Experience as one of your influences.  I happen to be a long time fan of theirs as well.  Front man Frank Portman has written a few books which, as far as I know, at least one of them is being adapted into a feature length film (King Dork).  With The Breakup Society lyrics being so narrative, do you have any interests in such aspirations or endeavors as well?
I actually just started writing my first book five days ago. I’m thinking “darkly comic” is the way most people will describe it. Some may even mean that as a good thing.

You have had a long affiliation with Get Hip Records, Was it intimidating at first being on a label with such a history and an impressive roster of acts like The Cynics, The Beat and The Fleshtones?

It was intimidating, sure, especially because the Cynics are so popular and Get Hip had never expressed any interest in doing a Frampton Brothers record. But they really like these three albums I’ve made with the Breakup Society.

I hear songwriters like Joe Jackson and Paul Westerberg in your music a lot.  Much like these guys, the lyrics in The Breakup Society seem to wear their heart on their sleeve, so to speak.  I can’t think of anything other than some firsthand experiences that can inspire lyrics like this.  Either that or you really know how to crawl inside the heads of characters from old John Hughes movies!  Is it sometimes difficult revealing some of these experiences in your life to the public or is it rather therapeutic?

Well, you know, the feelings in those songs are almost always based on feelings I’ve experienced. But the actual details can be fairly fictional. Or based on a reality I’ve witnessed but not lived. So, it is therapeutic to write them but because I tend to blur the line between reality and fiction, I don’t find it difficult to share, although I have made people feel uncomfortable because they thought for sure a certain song was aimed at them, which it frequently wasn’t. The working title of this album was “A Collection of First-Person Character Sketches” to get at the fact that there’s almost always some of both in every song. And “Mary Shelley” kind of gets at that whole concept.

I read a quote by someone saying that, above all the art forms; music has the ability to instantly change a person’s disposition.  Do you agree with this?  And if so, is there any song or artist or songs that you can think of that can lift you out of a serious slump, or vice versa?

Do you think the art of music can still be a vital and inspiring force to kids in such a disposable age?
I think music matters now as much as ever. I just think we’ve grown into a culture where people feel comfortable stealing their music. And I’m fine that, I guess. But maybe if musicians aren’t expected to be paid, they also shouldn’t have to pay for anything. You know, like the doctor can download your music for free and that’s OK, but in return, he has to see you when you’re sick and not expect some sort of payment in return.

50 years ago people used to buy music and get their water free, now people pay for water and get their music for free. How do you think this affects the music industry, epically the artist?
I think I accidentally answered this on the previous question. It’s bad for the industry, obviously. But that’s just how we’re wired now. I wish it hadn’t come to this. But when you write a song, you write it in the hope that people will listen. So, if that’s the way we listen now, then steal my music, please.

Where can people go hear the band or purchase your music?

We’re pretty good about letting you know when and where we’ll be playing on Facebook at facebook.com/thebreakupsociety. Are new album, “So Much Unhappiness, So Little Time…” is available here in Phoenix at Stinkweeds, for sure. And all three albums can be found at Amazon and iTunes.

What’s next for The Breakup Society?
I’d like to make a few more videos for this most recent album and I know we have enough new songs to start the next one soon. I’d like to get into the studio before the year is out. And in the meantime, of course, we’ll be trying to play as many shows as possible. I think the next album is feeling like more of a rocker because we’ve been playing so much.


The Breakup Society on Get Hip Recordings