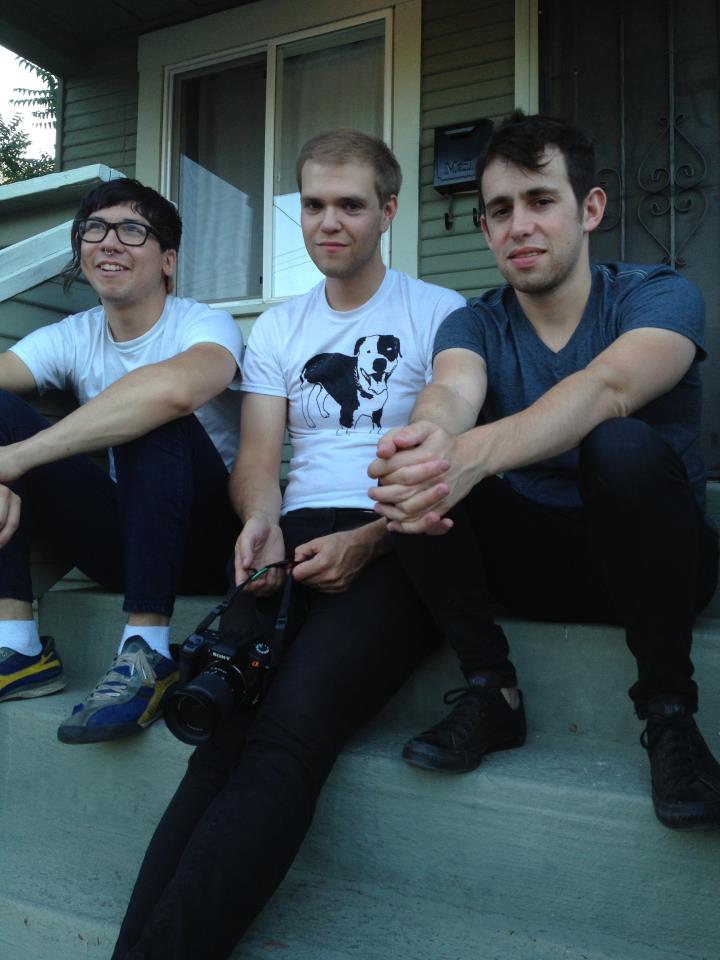 Boats! is the kind of band for short attention spans. A band that could probably write a two-minute song but chooses not too. A band that realizes you get more spins with songs lasting one minute thirty then ones clocking in at five minutes. A streamlined trio heavily influenced by early California punk most notably the Simpletones, have just recently released an LP on Modern Action entitled Black and White. The band has just returned from touring the east coast, northwest and Canada and is ready to keep playing their short, sharp, catchy songs anywhere that lets them.

Where is the band from?
We're from Sacramento, California (City of Trees).

Who is in the band and what instrument do they play?
Matt Leonardo - Guitar / Vocals /Songwriter
David Lee Hayden- Bass / back up vocals
Adam Jennings - Drums

How is the Sacramento scene? For such a big city it seems to be not a well-documented scene? Definitely overshadowed by SF/Bay area scene.

Sacramento has spurts of awesomeness- The Bananas are still one of our best local bands, but they rarely play Sacramento- once a year, if that. As far as BOATS! goes, Sacramento Sucks for us. We're yesterdays’ news. We do a thousand times better on tour.  Love Sacramento, but prefer life on the road.

Boats! has quite a busy last two to three months with the release of Black and White, an east coast tour, Canadian tour and a mini northwestern tour. How excited is the band right now? What were some of the best shows Boats! played on any of these tours?
We're super excited. We've sat on our new LP for over a year. We had been holding out for Adeline Records to put it out. After the long waiting game, our buddies in Modern Action Records stepped up, and agreed to put the record out. Being a huge Briefs / Bodies/ Sharp Objects fan, I was pretty excited that we'd be part of Modern Action Records.
Oddly all over our shows were really good. I couldn't really pick a best show for the tour, though Philly surprised me big time. We've never played or have been to Philly in any of our bands, and it seemed that people had came out to see us; we played great, and the sound sounded awesome. Over all, every show was well attended, so we were pretty amped for every show.

Black and White has been released on Modern Action. Is there any sort of special packaging for this LP? They’re a label known for producing unique releases or a lot of limited editions. How did Boats! get the attention of Modern Action?
Our first 30 records had special covers for tour…pretty much, the record company didn't get our covers printed in time, so we had to make kinko copied sleeves for the record. I believe they also had like 10 records made with white vinyl.  I was a huge Briefs fan, and over the years I just managed to become friends with the guys. Dan had moved to the bay area, and we played a birthday show with him with Youth Brigade. We kept in touch, and played a lot of shows with Sharp Objects. We showed them our new material, which they found to be more aggressive than any of our other records, and the rest is history. They pressed the record.

The Portland Show-Guide stated, “[Boats!] keep it short, simple and snappy with most songs clocking in at around two minutes.” Is this a consideration when writing songs because it does seem the overwhelming majority of songs clock in less than two minutes.
We are lucky if we manage to get two minutes ha! It is not something we consider, or even aim for. It just sort of happens naturally. Longer songs just seem to lose enthusiasm. We just always typically keep it simple. Also, we've never been huge fans of bands that play 45-minute sets…So we just sort of play shows, the way we'd like to see other bands play. Short, sweet, simple, and too the point.

50 years ago people used to buy music and get their water for free, now people pay for water and get their music for free. How do you think this affects music in any way?
I think naturally it affects bigger labels. As for smaller punk labels- kids have their heads on their shoulders. They like to support smaller bands and labels they like. There are a lot of record nerds out there, that love collecting, and having limited edition copies. It's nice to sell your records, and make some money. Enjoy the fruits of your labor, but its more exciting knowing kids have your music, listen to it, like it, and possibly sing along at our shows. I am not bothered or offended if they manage to get our music for free. I am guilty, and have downloaded free music in my time. For smaller bands, or bands I consider friends, I like to own their actual hard copy of their record.
My whole record collection is only of bands we've played with.

What’s next for Boats and where can people hear the band?
Well we are always super ambitious, but the reality is, what's next, is what is always next.
Write new music; record it, release it, and tour. Hopefully down the road, after Black and White gets out there more, maybe we'll be lucky and get picked up by an actual booking agent, or a bigger band that wants to take us on their tour…Green Day?…. maybe?….


Learn how to get your music noticed at ReverbNation.com