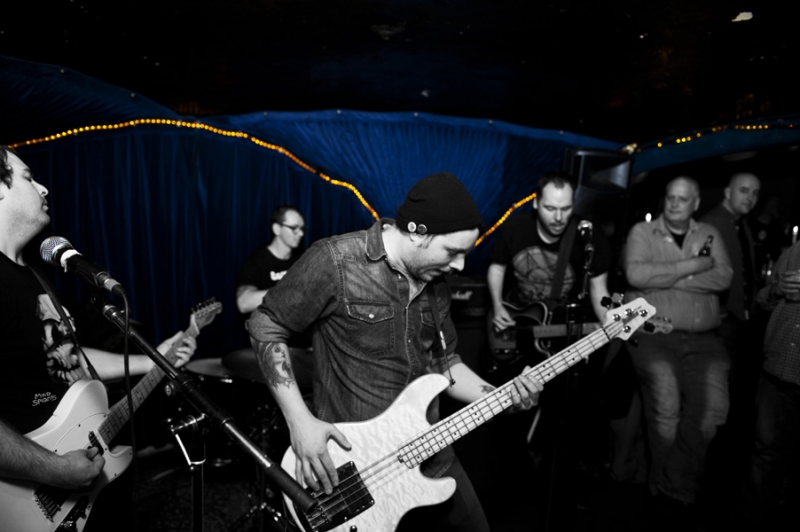 Las Cruces is a city that has arguably lived in the shadows of Albuquerque even though New Mexico State University is there, but this might change with furious pace at which Low Culture has been releasing records. Low Culture was born from the ashes of Shang-a-Lang and Total Jock. In a short time, they have taken their workman ethic to produce a demo, release two 7 inches and a debut LP on Dirtnap titled Screens which is equal parts garage punk and Husker Du. Las Cruces Rock City? Maybe? Not bad from a band that is so confident in their own songwriting that their debut video just shows them at band practice drinking beer and eating pizza.

How did the band start?
Prior to Low Culture, I was playing in two bands, Shang-A-Lang as well as a hardcore band with Cade and Sam called Total Jock. As it would happen, at around the same time, Andy, Shang-A-Lang’s drummer, told us he was moving to Boise and James, Total Jock’s guitar player, told us he was moving to Albuquerque. So both my bands were pretty much done for within a matter of weeks. I asked Sam and Cade if they wanted to start a new band with me since I had enjoyed playing music with them in Total Jock, and I got down to writing some new songs for the project. We practiced a couple of times and then recorded a demo. The week before our first show, Joe, who had been in Shang-A-Lang with me in the past, moved back to Las Cruces from Denton. We got some beers before a practice and I asked him to join the band. He showed up to practice and I basically said “hey dudes, Joe’s in the band now.”

Describe the Las Cruces scene? Isn’t New Mexico State University there? So are there a lot of bands there or is Low Culture the odd band out?
Like anywhere else, the Las Cruces scene has its ups and downs. We’ve run a DIY space called the Trainyard for the past 3 and a half years or so and prior to that the scene was primarily house show driven. Currently, it seems like things are looking up after a bit of a lull. Shows are generally better attended than they have been for at least the past year or so, and there are more houses and other spaces willing to do shows so things don’t feel so stagnant.
It’s funny, for years there was a shortage of bands and it seemed like I was in all or most of them. I’d have three or four bands at a time and would be playing a show at least once a week. These days there are actually a ton of great bands and there’s not nearly as much pressure to be the “local opener.” This has allowed us to really spend time on new material instead of just practicing for the next show.

Recently Low Culture just had two releases in a short span of time. The first release of the year is the Screens LP and then the second being the Evil 7-inch. How has band kept up this frantic release schedule while working day jobs?
I guess, in addition to what I said above, it helps that we have three songwriters. For the past two releases Joe and I have pretty much split songwriting duties and Cade has contributed the more “hardcore” songs on the S/T 7” (Nervous Wreck) and Screens LP (Nightmare). As a result, it’s rare that there’s a practice where one of us doesn’t have something new to work on. One of the best things about being in this band is that all four of us are competent and opinionated musicians. It’s rare that a song is brought to the table where suggestions aren’t offered and changes aren’t made. It has been incredibly refreshing to be a part of such a collaborative process, because I think it pushes us to get better.

Low Culture has been on a variety of different labels, Dirtnap, Dirt Cult, Dead Broke, Rad Girlfriend, Drunken Sailor, can you give some insight on working with these different labels? Do they usually ask the band for releases or is the band sending out demos?
Well, it helps that I run Dirt Cult Records. We recorded the demo and the next day I posted it on Dirt Cult’s Bandcamp page and started dubbing tapes. As for Dead Broke, Rad Girlfriend, and Drunken Sailor; those are all run by friends I’ve made from running this label and from being in other bands. Every single one of them has either put out a split record with Dirt Cult and/or released a record for one of my previous bands. I don’t really remember how they initially got involved with Low Culture, but I’m pretty sure I knew they liked the demo so I asked them to help with the 7”.  Then when I ran out of tapes Mike from Dead Broke asked if he could repress the demo tape.
Our involved with Dirtnap is perhaps a bit more complicated, but not really. Ken has been someone I’ve known for quite some time as we’ve traded records through our respective labels and hung out at Fests and when previous bands have been in Portland. I’ve always respected and admired his label. Frankly, releasing something on Dirtnap has been a dream of mine since I first encountered the label in the early 2000s. Joe is in the Marked Men and they have released nearly all their records on Dirtnap. So he kind of spearheaded asking Ken if he was interested in doing something for us. We figured at the most, he might be interested in doing a 7” but he got back to us fairly quickly saying “I want to do an LP for you guys!” Needless to say I was excited…we were all excited. So we went about writing a ton of new songs. And we’re currently about halfway through writing another record for Dirtnap, so our excitement continues!
As for our newest 7”, Evil b/w Slave to you, that was released by Drunken Sailor and Cut the Cord That…Records. Flo, who runs Cut the Cord That…actually booked our European tour so I asked him if he’d be interested in doing a European 7” for it. Julian from Drunken Sailor got involved with that one because we love him, and we were playing some dates in the UK where he’s based out of.

Evil has been described as “deliver[ing] punchy, poppy garage with melodies that get caught in your head without wearing themselves out through repetition.” Is this review from Scene Point Blank describe an intended direction of the songwriting? What is the general songwriting process for the band?
I don’t know if we have a “process” per se. Basically, as I alluded to above, someone brings riff or song to practice and we spend a few hours dissecting it and trying to make it better. It can be a pretty humbling process. I’m pretty sure that we all, at one point or another, have gone into practice thinking we had a pretty solid idea and thrown up our hands in the middle of it all and said “never mind, I don’t like it” and either trashed the song and took it home to try to make it better. It’s been a really different dynamic in that way than in many of my previous bands where you show up with a song and it’s done, or only a few minor changes are made. I like it. It challenges me.
In terms of the quote you mentioned, I think that’s rad that people feel that way. I’m a fan of melody. Even the hardcore I listen to has to have a hook. So while I don’t think its “intentional,” at least for me, I write what I like and I write what comes naturally for me.

Do you think it’s tougher for bands to get noticed today than it was ten years ago or do you think it is easier? By noticed I mean fans finding the bands, press etc.
I think it’s both tougher and easier. I mean, when I was a kid I had to dig to find out about bands by reading the “thank you” section on band’s I liked liner notes and by reading reviews in zines. I really had to investigate and there was no guarantee that I’d even like the band if I ended up deciding to purchase a record. But the “hunt” was half the fun. These days EVERY band is a click of a button away and it makes checking new stuff out so much easier. At the same time, with social media it seems like we’re bombarded with links every day, and I for one don’t have time to click on every single one.  There are plenty of bands I’ve slept on for years, only to finally check them out and find out I love them. So it goes.

Razorcake has described Screens as “the recording is the cleanest it’s ever been with a band with Chris Mason involved in it, but it’s not a false dress-up—like a movie-ticket-taker in a bow tie—but a fuller, higher fidelity sound that provides a greater depth.” Why the desire to have a cleaner sound for Low Culture than in previous bands?
I think Todd is primarily referencing Shang-A-Lang in this one. Shang-A-Lang was “dirty” out of necessity. We recorded on four-tracks in our practice space because there is no one in Las Cruces who we trusted to record us and coordinating schedules to get out of town to record was always a nightmare. Looking back, I think that lo-fi sound turned a lot of people off, and that band would have been a bit more “successful” (whatever that means) had we figured out a way to go into a proper studio. Then again, doing everything ourselves allowed us to be pretty prolific, with an LP and more singles, split 7”s, and compilation appearances than I can count. For whatever reason, it’s just been easier to go out of town and record with this band. And since we’ve been happy with the results, we’ve just kept doing it.

I had read that there was a European Tour in the works?
We were in Europe in March. We played in Germany, Denmark, Switzerland, France, the UK, Belgium, and Holland. We’ve been back a little over two weeks and I already want to go back. It was the best time of my life.

What’s next for Low Culture and where can listeners hear the band?
We’re playing Chaos in Tejas in June and Awesome Fest in August. I’m also hoping we make it up to the Dirtnap showcase in Portland and Seattle in September. And as I said, we’re writing a LP that I hope we’ll be ready to record by late summer. We’re also recording a song for a Big Boys tribute comp coming out sometime this year on Stiff Hombre Records.

Posted by Audio Ammunition at 7:51 PM