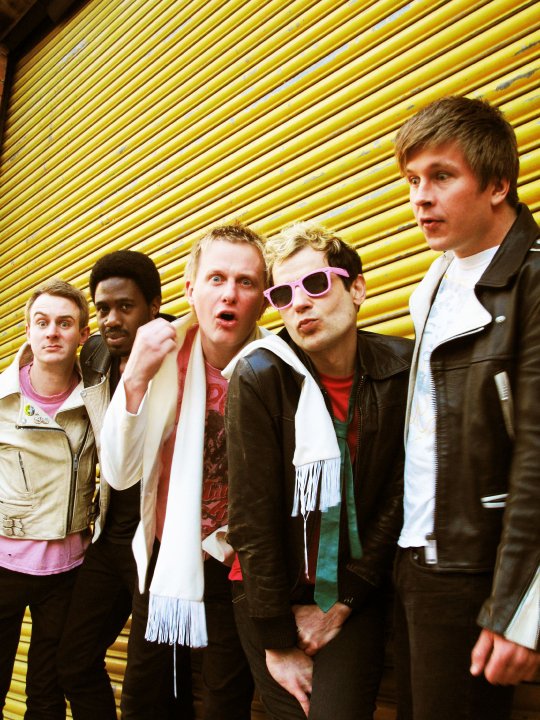 Cyanide Pills have one of the cleverest bios ever written in the fact that it isn’t a traditional bio at all. But when it comes to musical influences there is no messing around. They mix classic era Buzzcocks with a touch of Briefs and Dickies thrown in for good measure to create a catchy hook driven sound. The band has a new LP Still Bored coming out on Damaged Goods. For a band that “just try and play stuff of a decent standard” they are doing a good job of raising the standards beyond decent to must listen.

Where is the band from?
Four of us are from Earth.

Who is in the band and what instrument do they play?
Phil Privilege - Vocals
Sy Pinkeye - Guitar
Alex A - Guitar
Alaric ‘The Trick’ - Bass
Chris Wrist - Drums

How did the band start?
No big story, just a group of like- minded people thought they would form a band.

What bands did you have in mind when starting this band?
We are all fans of 1970’s punk rock, I would like to think if we were around at that time we would be up there with all the good bands from that era. Our ambition is to be on Top Of The Pops but in the year 1978! Step 1 is to write the songs, step 2 is to build some sort of time machine.
Step 1 is going ok.
More contemporary bands we like. The Briefs, Guida, Cute Lepers, Sharp Objects, The Gaggers, The Barreracudas, Mean Jeans, Clorox Girls…there’s loads of good stuff out there, go find it.

The band’s bio is the most unique and creative, I’ve read. “A gang of c***s from a desolate land. Ladies and Gentlemen I give you the band... CYANIDE PILLS.” Why the desire to do a poem instead of the traditional band bio.
Most bio’s I read are boring.
They really get me snoring.
Don’t care where you’re from.
Just play the Fucking song…well. You get the Idea.

The band’s favorite shows they have played this far?
We have a great time everywhere we play, From Gateshead to Berlin, Bologna to Bradford. All good. There are some great punk clubs and great people out there. Go.

Do you think music can still be a vital force in such a disposable age?
“Without music, life would be a mistake.” Nietzsche

Rip it Up describes Cyanide Pills “approach to their sound seems a little bit like the way the Japanese manage to observe, assimilate, refine and eventually outdo any new technology that they discover.  These guys have clearly spent their [mis]-spent youth poring over every scratched 7″ copy of ‘Marquee Moon’ and ‘Promises’ that they could find down the local secondhand record shop – they have produced an album so full of riffs [Buzzcocks], ‘OoohOoohs’ [Ramones], and catchy hooks [Dickies] that it almost hurts!”  Do you feel this is an accurate regarding the band’s sound and songwriting style?
It’s a compliment indeed! We just try and play stuff of a decent standard, bands like the above mentioned Television, The Ramones, Buzzcocks, Dickies set the bar pretty high.

Can you tell a little information about how the recording went for Still Bored? It looks to be released next month on Damaged Goods?
We always record with the great Carl ‘Razorblade’ Rosamond. We got it done in a few   days and its came out well. We didn’t think we would make a second album. Then Damaged Goods asked for one.  So, we made one. It’s out April 8th.

How did you guys connect with Damaged Goods? On their website they think, “Cyanide Pills may just be the greatest band in the world.” It seems that the label really likes the band since they have released both LP’s and a series of singles.
Ian Damaged saw us play one night, afterwards he said “I want to put a Cyanide Pills record out” We thought he meant one! But he had other ideas.

50 years ago people used to buy music and get their water for free, now people pay for water and get their music for free. How do you think this affects music in any way?
Personally I like my music on vinyl. It looks and sounds better and I don’t mind paying.
Personally I don’t like water I prefer wine. It looks and tastes better and I don’t mind paying.

Posted by Audio Ammunition at 4:40 PM