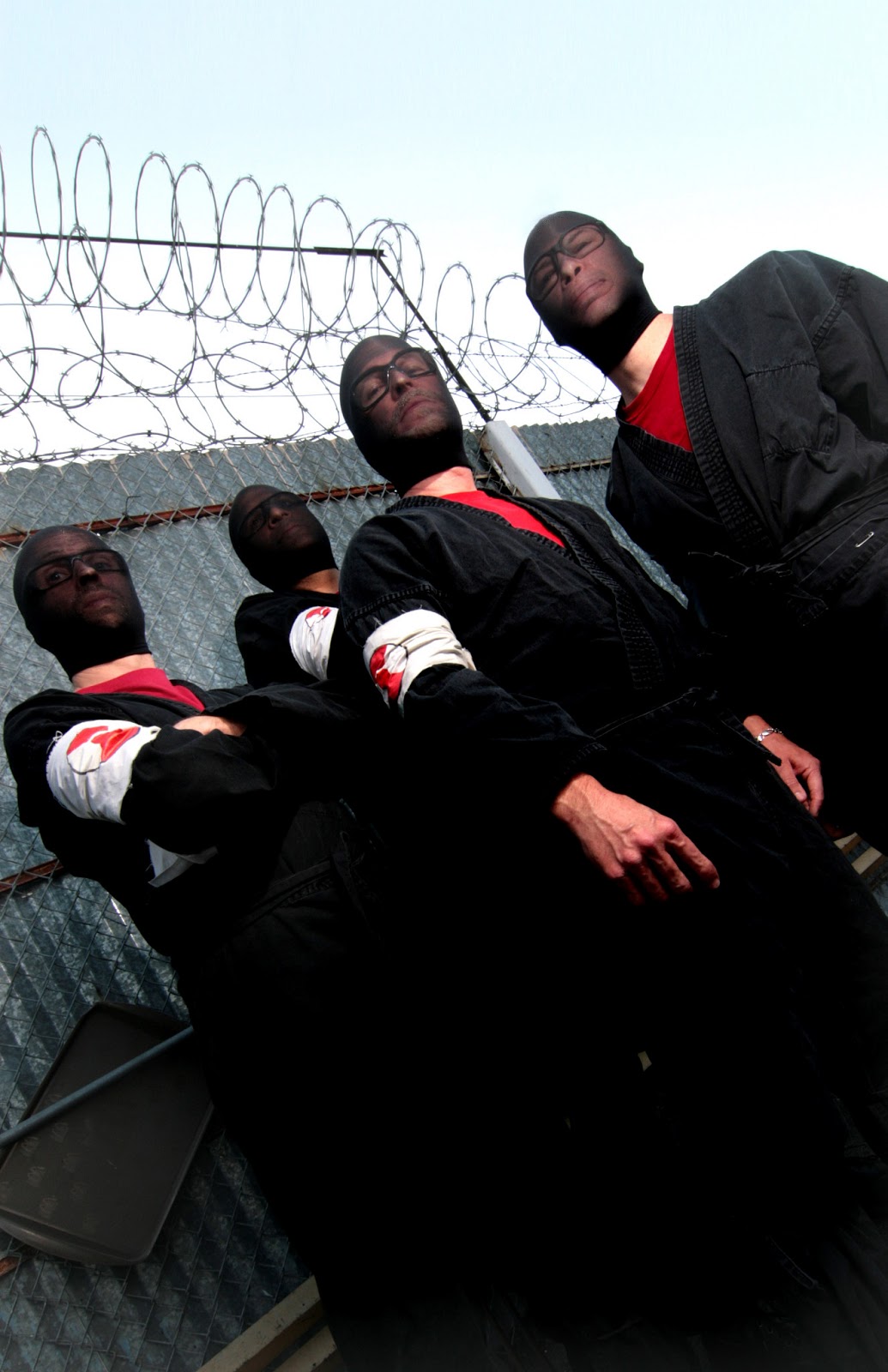 “I just got sick of dealing with singers” is the genesis of how this band started. The Black Widows, who according to their band bio just got together over an hour ago, have put together a string of all instrumental tunes that are heavy on killer riffs that are both all original and all evil. Who needs singers anyway? Well definitely not Black Widows and they are out to prove a band can both rock and hold people’s attention with only music, no vocals.

Where is the band from?
Los Angeles, California

How did the band start?
I got sick of dealing with singers, and I like instrumentals. Had some tunes. Found some like-minded dudes. Got some ninja suits. Thus, the Black Widows.
The name came from my mailbox. Every day I would just stick my hand in the mail box and grab my mail.  One day, for no reason, I looked in my mailbox before reaching in, and there was a Black Widow spider in there! I took it as an omen.

I’m sure you have been asked this before, but why no vocals? Why keep the “music is all instrumental, all original, all evil?”
As I said earlier, I just got sick of dealing with singers.  They have a tendency to jump aboard the ego train, shall we say.  Not all of 'em, just 99% of 'em.
There's a lot you can say without vocals.  It's a challenge to come up with something more than just a killer riff.  The Killer Riff is important, but what separates the greats from everybody else is the ability to convey emotion and depth, hold people's attention and maybe even have a rockin' beat.  There are a lot of instro bands out there- rock, jazz, classical, world music.  We like the challenge.
We play all originals because that's a challenge too- to come up with new classics.
And we're all evil because that's just who we are.
The band just released their new LP, Revenge of The Black Widows, how the reception been for the new LP? In a review from Roctober, it states, “If you expect me to say anything other than “I WORSHIP THEM!!!” about a motorcycle gang surf rock masked trash instro band then you never met me.” That is a great review. How does the band feel about getting such a positive review for the new LP?
We're glad somebody agrees with us!  The album just came out but we've had a number of reviews, all great.  I think we're different from what people expect. We're basically a hard rock act that occasionally ventures into quieter or jazzier territory. Most instro rock acts nowadays are either doing surf music or some 60's garage bag or techno metal, which might be catchy or interesting on a conceptual level, but in the basic "Kick Out the Jams" aesthetic; most of 'em don't have it.  We have it.

What bands did you have in mind when starting this band?
There were no bands we wanted to copy, but of course the Ventures and Link Wray and Black Sabbath were big role models. And Black Sabbath.  Did I mention Black Sabbath?
We subscribe to the idea that you should at least be as good as your heroes, if not better.  And if you share a stage with them, go for the kill.

Do you think music can still be a vital force in such a disposable age?
It can still be a vital force. The problem is with the time we live in.  I've discussed this very subject many times with fellow musicians.  Most of them feel adrift, as if they are playing songs for nobody, as if the music will have no effect on anything.  Music, and art in general, has been devalued. It's used as commerce and wallpaper. As a force, music is more important than ever. It's one of the only ways to unite people and give them a sense of spirit. You won't get that from your iPhone or your SUV.  But there's been a deliberate plan to steer people into a sort of "worship" of consumer items and money in general and away from tactile, emotional things like music, art and just standing up to injustice.
The fragmenting of pop culture is to blame as well. It's hard for music to have the impact it once did because the audience is so spread out. The Internet has made music a much more democratic medium than in the past, but it has also diluted the focus. You can be the greatest thing in the world to Communist Latino bikers between the ages of 25 and 40 who speak no English and don't own radios. That can be your target group and you can live for years off that. But the guy across the street still doesn’t know your name. I have faith in music. But I have no faith in the age we live in. But like a wise man once said- this too shall pass.

The first LP, Arocknaphobia, was released in 2000, but the new LP just came out. Why so long between releases?
The band had to take a hiatus, due to some members moving away and some falling off the edge of the world. It took a while to find great new Black Widows, but we did.  Recorded and mixed an album, took it to the mastering plant, and the drummer fell off the wagon and into a drug haze. We kicked him out and he said he didn't want his tracks used on the album. So we scrapped the album, found a new drummer, re-recorded the entire album, and that is what you have here. Took a while, but I'd say we traded up. And this version of the album is 100 times better.

50 years ago people used to buy music and get their water for free, now people pay for water and get their music for free. How do you think this affects music in any way?
This is greed in action. They just shifted the money somewhere else. Someday you'll get music and water for free but you'll have to pay to walk down the street. Greed is going to kill this world. But there might be some good songs.

Where can people hear the band?
Theblackwidows.net is our website. Be sure to type "the" because if you just type "black widows" or "black widow" you get spider info or metal bands. You can also buy our albums and t-shirts there and see some videos. And we're on iTunes and Amazon and various sites like that. Hopefully you can come see us play, and also purchase our stuff and buy us a drink. It's a package deal.

What’s next?
We already started the next album. We're doing a split 7" with The Atomic Sherpas that may be out this summer. We're on some compilation album on Scare America. Don't know when that's coming out. And we're talking to somebody about doing the soundtrack to a movie, which is a good job for us. We're dusting off the mantle in our hideout for that Grammy or Oscar.  I mean, ya gotta be prepared!

Get Band email for free at ReverbNation.com