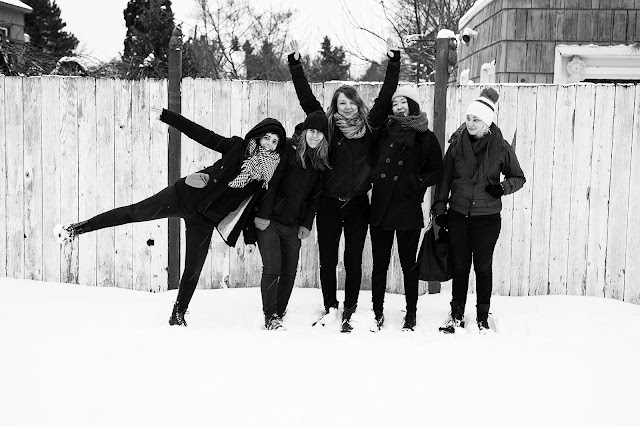 Portland Oregon's The Stops released their debut LP earlier this year to much critical acclaim.  The Quintet play sharp, infectious punk rock with shadowy edges,  Ruby, who contributes her guitar skills and vocal prowess to the melee recently took some time out of her busy schedule to answer some questions for us as her band prepares for their European invasion.


Let’s start out by telling me who’s currently in the band and what everyone does:
RS: Lizzie Sings, Cissie plays bass, Rita and I are on guitars, and Fukuko plays drums. That's the line up for our recent recordings. We have Mike Warm (Observers, Defect Defect, The Minds, Arctic Flowers) filling in on drums right now since Fukuko just had a baby.

Tell me The Stops origin story. How did you all meet and how long have you been playing music together?
RS: Fukuko and I met in Portland after she moved here from Tokyo. We would chat at shows and eventually I asked her if she wanted to start a band. Fukuko had seen Cissie play with Repercussions at Chaos in Tejas so she suggested we ask her to play bass. With Rita it was a bit more complicated. We actually met in Czech as teenagers when we were both on tour and she was living in Brazil. She moved to Vancouver BC a couple years later and we met again when I was touring up there. Eventually she moved to Portland and we ended up living in the same house. She was dating my roommate. Rita had played guitar for an awesome punk band in Sao Paulo called As Mercedes, so asking her to join was a no brainer. Since Fukuko, Cissie and I were practicing in the basement it wasn't long before we were like “just get down here!”
Lizzie and I had been hanging out at the same shows for about 11 years. In 2013 I saw her sing and play keys in a band called Pataha Hiss. Her style seemed like a good fit for us so we asked her to join.

When you started the band, did you have a particular sound in mind that you wanted to work towards or was it a “hey let’s just play and see what comes out” kind of thing?
RS: We all agreed that we wanted it to be melodic punk. We didn't have an exact sound in mind- we just knew we wanted a vocalist that could sing well. It was quickly apparent that the instrumental portion would be a fusion between what we were listening to at the time and the bands we grew up on. While we had no intention in achieving this, we are often told that we have “the Portland sound.”

he Stops are currently based in Portland. With so many other great bands there, what is it like playing shows? Do you ever feel like it gets competitive or are most people pretty supportive of each other?
RS: I would say that people are mostly supportive. There is a lot of band member overlap, and in that way it feels like we're all in it together. I feel really lucky to live in a place where everyone in the punk scene plays an instrument or at least aspires to. At the same time, we are all pretty spoiled to have so many talented individuals and great bands that sometimes it can be hard to get people excited. I've seen really good punk bands play to stiff crowds and empty rooms here. I went to a Poison Idea show recently where someone said, “come on you guys, it's fucking Poison Idea,” since only a couple people were giving as much as a foot tap. Regardless, a lot of people are engaged in the punk scene and this provides the framework for people to participate in other ways than just attending shows and playing in bands. Whether it's opening a business, starting a craft night, or putting on an art show, people here are interested in participating in others endeavors- creative or otherwise.

Your debut LP Nameless Faces came out a few months ago, can you tell me a bit about your experiences working on it?
RS: Franz from Sabotage Records contacted us last July to ask about doing an LP. We didn't have enough material to do it at the time so we really had to buckle down to make it happen. The pressure of time constraints made us get a lot done. Rita and I went to the studio for mixing whenever we had time but it still took months to finish. The Stops even started recording for a 7” before we were done mixing the LP. Fortunately it was a lot of fun to be in the studio and we had a great sound engineer who I've known for over 10 years. Adam Becker (Autistic Youth, Defect Defect, Red Lantern Studios, Trash Treasury) did the recording and mixed with us from November till around April. He'd do things to help us de-stress like playing Michael Jackson in our headphones between recording flubs. He also had a really cool analog chorus/delay/reverb pedal, previously used by Elliot Smith that we used for a couple of songs on the LP.

I was reading an interview with Kim Shattuck from The Muffs and she said she never includes politics in her lyrics because she feels that it dates the song. What do you think about that statement? Are there any subjects you try to stay away from in your lyrics?
RS: I think she makes a valid point but we have never been concerned with what we should or should not talk about. We have not put any lyrical constraints on ourselves and there aren't any subjects we have purposefully avoided. That being said, our aim isn't necessarily a political one. Our songs are about our experiences as people and how we see the world. The content of our writing isn't meant to fit into a mold that reflects stereotypes about us as women, punks, etc. For us, the point is to play music, write lyrics, and be in a band simply because we enjoy doing it. Putting restrictions on what we sing about would totally go against the grain of the type of people we are.

What band or musician would you say has had the single most influence on your life? Tell me about the first time you heard them and how you felt when you did.
RS: If I must pin it down to one band then I have to choose the one that got me into punk: The Ramones. My only exposure to rock n' roll before them was what was being played on alternative radio stations in the 90's. Discovering the raw pop hooks of The Ramones was life changing. I don't know what I thought punk was at the time but it was not immediately clear to me that they were it. When I found out, I thought “oh this is punk.. Ok I guess I like punk.” I began hunting down information on bands like the Sex Pistols and Clash so that I could download their albums off Kazaa. The Ramones' sound was a perfect introduction to punk for me. It felt like I was beginning to understand what made me tick.

The band recently played a show with School of Rock Portland. How did you become affiliated with them and how did you feel the show turned out?
RS: Lizzie currently works there as a piano/vocal instructor, and we were asked to play the Best of Portland fest because one of the lead organizers liked our demo. Overall the show was good and a lot of people came out to watch the kids. It's really heart warming to see teens and pre-teens playing in bands. The school provides an environment that helps them succeed as budding musicians while giving them a safe space to feel supported and engaged. We have many friends who have contributed to or worked with School of Rock since it's a great way for musicians to give back to the community.

I’ve seen a couple of really cool Stops shirts. Is that Medusa’s severed head being held up?! They’re both great! Who came up with the designs for them?
RS: Hey, thanks! That is in fact Medusa's severed head. During high school I became interested in Greek mythology. Using Medusa on a T-shirt seemed appropriate for us so I asked my roommate if she could draw it from a photo of a famous statue. Rita put the drawing in photoshop, tweaked it and designed the background. The skull design was done by Rita's friend Flávio Bá. We found the image on his website and asked if it would be all right for us to use it. He was more than happy to let us put the design on a t-shirt so he added The Stops logo at the top. Our new design will have a girl's leg kicking a cop in the face. We found this design in my friend Allison Phillips' portfolio.

What non music related things do you all enjoy doing around Portland?
RS: We all work or go to school. Everyone in the band does many music related things including DJing, working at the local radio station, giving music lessons, attending shows, etc. So the only time left at the end of the day is spent hanging out, eating good food, watching TV or reading for the most part. Sometimes during the summer The Stops like to go to the river after practice just to catch some rare Portland sun-rays. 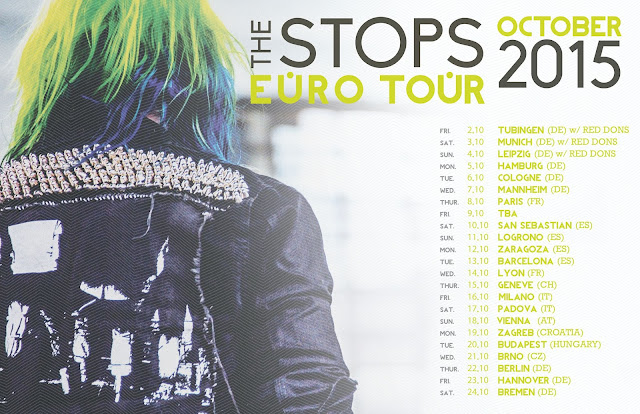 What lies in the future for The Stops, any tour plans in the works?
RS: Yes. We're touring Europe from October 2nd – October 24th. We will have our 12” and a split 7” that we did with Daily Ritual. After that we will be taking a couple months off and writing more songs. We might tour the US sometime in 2016.

Posted by Audio Ammunition at 4:31 AM