An Interview with Slick! 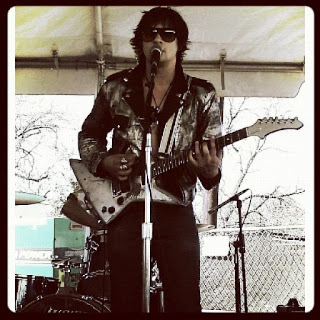 Nick Slick, front man of Oakland's very own rag tag trio of gutter glam heroes Slick! had some time to sit down and answer a few questions for us.  In a revealing interview, find out why he talks like Tony the Tiger, why he doesn't care what his audiences do while he's playing, and why he believes Joe Jackson is a spaceman!

Who is currently in Slick and what do you all do in the band?
Nick: We are a classic three piece or power trio as alot of people like to say. It consists of me Nicholas J.C. Slick! on guitars, vocals, various keyboards (on the record) and miscellaneous percussion, the lovely and talented Sasha Simone on bass and angelic harmonies, and Matthew the monkey man Costa on drums.

How did you all meet and decide to play in this band together?
NICK: Last year I was in a band called Glitz, we were booked to play a showcase at SXSW 2014 but 2 weeks before we were scheduled to hit the road our drummer told us that he couldn’t do it. It put us in a very difficult position, with little deliberation we hit up every drummer we knew who could pull off learning two sets in two weeks. If you’ve ever been in a rock & roll band you know that drums (and drummers) are notoriously the most challenging component to integrate into an already formed band that already has a specific particular sound. Every drummer we knew was already too busy or it was too short notice to pick up and go tour the south west for a couple weeks. Finally when things were looking pretty bleak, I was telling my good friend Mike Noda (later to play bass in Slick!) who I was living with at the time about this predicament and he suggested the drummer in his band Caldecott the man was Matt! I hadn’t considered that because they were more of an accessible easy listening to mellow indie band. Kind of like something you’d hear on an adult contemporary radio station like KFOG, but we decided to give it a try. It turns out Matt was very familiar with us and previous bands we’d been in and was quite a fan. So he was very enthusiastic and glad to be a part of the whole thing, on top of that the guy’s a great drummer, of course it was a little shaky at first but by the time we played our way down to South-by and back he had it down. Later we disbanded due to creative differences and Matt & I formed Slick! We’ve been a band less than a year and have already gone through numerous bass players, I had known Sasha through other projects she’s involved with that were outside of the “scene” that I’m more familiar, I knew she’s ambitious and a talented player so it was perfect timing.


How would describe your band’s music to someone that’s never heard you before?
NICK: I’d say if you like Rock & Roll, Pop, Glam, Punk or anything that’s timelessly classic, what we do is everything you’d want to hear. With Slick! you can hear everything from the Beach Boys to G.G. & The Jabbers, from Roy Orbison to KISS I could go on forever with the blanks to the blanks but I think you get the idea. I want to have a very recognizable sound but nostalgic at the same time without barricading myself into one thing.

What typically inspires your song lyrics?  Are there any subjects you guys purposely avoid in your song lyrics?
NICK: Lyrics, I will admit are what I’m least good at musically, I tend to stray away from cerebral poeticism or politics. I’m not a Bob Dylan Leonard Cohen type of songwriter even though I’m a fan of both. My lyrics are usually very surface level, simple, dumb not much nuance or double entendres hidden meanings etc. As far as what inspires them, a lot of it is from my life experiences or stories from my friends or family. The musician’s condition is another inspiration “You don’t like me (Cuz I rock & roll)” is a testament to how I feel about the current state of bay area music not limited to, “Your band Sucks” as well. The rest are about all that romance, because let’s be real, people can’t get enough of that shit. It’s autobiographical though is what it comes down to, all I can do is write about what I know and see if I can do it in a way that people can relate to. We’ll see about that though.


What’s your favorite album to listen to from beginning to end?  Tell me a little about the first time you heard this album.
NICK: Fun House by The Stooges. I was very young and very on drugs.


I was reading this interview with Nick Cave and he said that out of all the art forms, music has the power to change a person’s mood the fastest.  Do you agree with this statement, if so are there any records that you put on that can change your mood pretty fast?
NICK: I do not agree with that statement. I think it’s probably true for people who love music, however there are so many people who really could care less about what they hear. Why do you think the radio can get away with playing the same 20 songs all day every day? I think the average person when it comes to music is either indifferent or adapted to whatever is presented to them. That being said it’s obvious that there are very common threads among what the average person likes and how it makes you feel. It’s been said if you play a song that’s based in the major scale it will typically sound like a happy or more upbeat song, however minor can be interpreted as sad or melancholy. Mostly seems like ain’t nobody care. 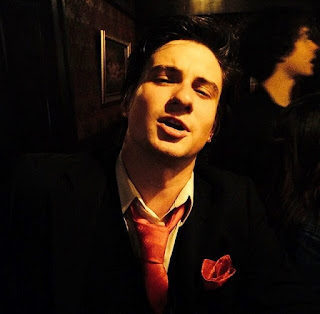 When you guys are playing live, what’s the most annoying thing an audience members has done that totally distracted you from rockin’ and rollin’?
NICK: I just want ‘em to go crazy, other than that they can do pretty much whatever they want. It’s a show it’s about having fucking fun!


If Slick could tour with any band from any era throughout rock ‘n roll history, who would it be and why?
NICK: Probably the Doors or the Grateful Dead hahahahahahahaha need I say more?


If you were a space explorer and got stranded on a life sustaining planet with only (A) one person, (B) one meal, and (C) one record to listen to for the remaining
of your life there, what would all of  these be:
NICK: The Person : An alien woman that first would try to kill me but then later fall in love with me and then we would fuck and create an entire race of alien humanoids that would create technology and 10 million years later destroy the planet through our selfish ways and have to go colonize another planet.

One Meal:  Either Chinese food or Mexican food

I probably wouldn’t bring a record I would just start a band with my humanoid/alien children and I’d exploit them for the entire planet, I’d be like a spaceman version of Joe Jackson, actually he probably was a spaceman.


What’s the single best piece of advice someone gave to you that you followed and actually helped?
NICK: When anybody asks you how you’re doing? Reply with “I’M GREAT!!!” and say it in the voice of Tony the Tiger.

Where can people go to buy or listen to you music?


NICK: A bar, your mother’s house, the street, my house, any venue in Oakland or San Francisco, iTunes, Spodify, Soundcloud, Youtube, the mall, a car, any body's town via www. it’s extremely easy to find if you’re not a useless person.

Posted by Audio Ammunition at 10:44 AM