An interview with Van Dammes! 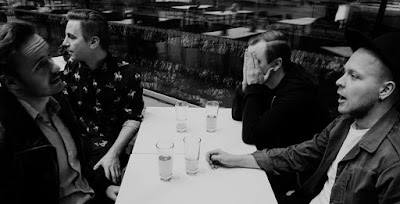 Earlier this year Helsinki's Van Dammes sent us over their new EP.  Just by the name alone conjuring up images of old corn ball Jean Claude flicks, you expect to hear music that somewhat goes along with that mental picture.  What this fiery Finnish foursome brought to my ears was something totally unexpected though.  They play loud garage punk that lays on a bullet train of melodies! Van Dammes songs are built solid on a foundation of guitar hooks, static fuzz, and old fashioned charm.


How did you all meet and decide to play music together?
Markus: Three of us used to play in a same band for years, releasing three albums and playing 200 shows. However, due to a lack of motivation with that band, this new band was formed. Our fourth member, drummer Jussi, was a random choice since he had never even touched drums before joining the band.

Juho: Jussi was also a very good friend of ours already before joining the band. So when he said that he would like to start playing drums in Van Dammes we didn't hesitate.

What band or musician first inspired you to want to pick up an instrument and play in a band?
Markus: Pet Shop Boys.

Juho: Pet Shop Boys as well. Me and Markus started our very first band together when we were like 10 years old though we had no idea about how to play any instruments. The main thing was just being in a band. Later on we of course had to figure out how to deal with the instruments and get some music out of them.


You released your second EP Better Than Sex earlier this year.  Is this the sound you imagined having early on or did the music go in a different direction once you all started playing together?
Markus: In my opinion this is really something what we wanted, the point is to have good songs sounding slightly crappy.


And speaking of your sound; Bandjack.com described your sound as “ranging from straight forward Ramones rock to super sleazy ‘80s sex rock”.  I’m not really sure what that means but do you agree with that description?
Markus: Well our very first single Daniel was clearly inspired by the Ramones but I don't really know what's the exact definition of the 80's sex rock is... but it sounds good so I totally agree with that description.

Juho: Especially "straight-forward" is a very good expression to describe the music of Van Dammes.


Van Dammes are currently based in Helsinki, Finland.  I notice you’ve toured Finland quite extensively. Are people in Finland supportive of the type of music you guys play?
Markus: At least people at the venues we have visited have been very supportive. Generally speaking, all the university cities are always receptive. Smaller places can be more challenging. But I guess that's the same everywhere.

There have been a lot of bands speaking out against their audience members using their cell phones during a performance.   What are some of the things you’ve seen people at your shows do that annoy or distract you when you’re playing?
Markus: We are not easily distracted.

Juho: The one specific occasion which comes to my mind is that when we had a show exactly at the same time with one of the quarter final matches of Fifa World Cup 2014. Some members of the audience were simultaneously watching our live show and the match with their phones. However, I understand this completely, and the good thing was that we could ask the audience what was the score.


You guys have a few videos that you’ve made to accompany your songs.  Tell me about the video you made for the song “Vesna (Flash in the Night)”.  Do you guys enjoy the process of making videos?
Markus: The video for Vesna (Flash in the Night) was shot in freezing Helsinki last January. It was a nice and relaxed process because the directors were our friends. For our first EP we made videos using old archive materials. That was also cool.

Juho: Shooting videos is very nice but shooting videos outside in Finland in winter with some minus degrees is perhaps not the nicest thing to imagine. Next time we should shoot a video in the tropics.


You guys wrote a song about Noriaki Kasai, the award winning Japanese ski jumper.  Are you guys big fans of his and his sport?
Markus: We were all born in a town called Lahti, which basically is the Mecca of ski jumping, so it was natural to go to see that sports.

Juho: That's correct. We kind of grew up under the influences of ski jumping. Mr. Noriaki Kasai is particularly a very inspirational sportsman. He's 43 years old but still kicks the asses of the guys who are like 25 years younger than him. Once I had an honor to meet Mr. Kasai personally. He told me then that he will continue forever. 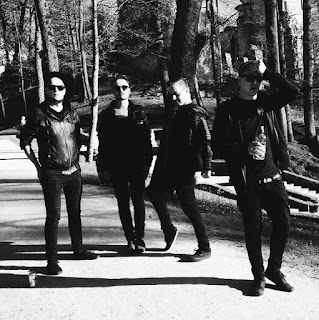 If you were exiled to a deserted island to live out the rest of your life there but were allowed to take (A) One meal (B) One person and (C) One record with you there, what would these be?
Markus: A good assortment of ice creams, Noriaki Kasai, and Pulp's Different Class.


Where are the best places to go or log on to hear or buy your music?
Markus: Unfortunately the boring places called Spotify and YouTube.

Juho: And to get things even more boring, the recordings are also on iTunes.

Markus: I forgot that you can also come and see us live. That you can do without logging on anywhere.


What lies in the near future for Van Dammes?  Any recording or touring news?
Markus: At the moment we are fighting because we cannot decide whether to release an album or another EP next. Anyway, the release of that recording will be early next year. We are also planning to tour Europe more extensively than before.

Juho: We are going to drink some beer and play punk rock as well.

Posted by Audio Ammunition at 5:40 AM