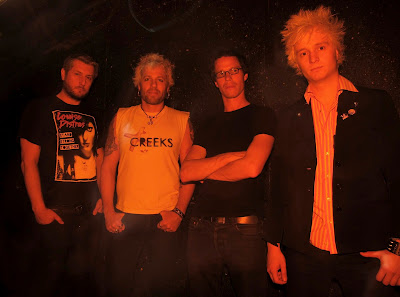 Nasty Rumours are from Bern, Switzerland and they play one of the most infectious brands of punk rock around today.  They take their ques from the late 70's punk bands that had a pop edge to them. Bands like Generation X, The Vibrators and The Undertones. These guys aren't a bunch of mindless copy cats though, they've got a soul and an energy that's all their own and it plainly shows in their music.

Let’s begin by telling me who is currently in the band and what everyone does in it?
Juli: We are 4 guys in Nasty Rumours; Danny / drums, Flo / bass & backing vocals
Jamous / guitar & backing vocals, Juli / lead vocals

How did you all meet and decide to play in Nasty Rumours together?
JAMOUS: The four of us knew each other already for years. Growing up in a small town in the Swiss Alps, there was only one place to go to, one club where there was punk / metal / alternative music on a weekly basis – bands from all over the world passed by and literally showed us how music is done.  The place is called “Café Bar Mokka” in Thun (and by the way, it is the most beautiful club all over the world, travel to Thun and have a look yourself). “Café Bar Mokka” was the place for all of us to start chatting up other music freaks and so a lot of bands were founded in that environment in the late 80’s, early 90’s. Danny at the same time started his own label “Subversiv Records” and all those bands started to release their first efforts under the “Subversiv” flag. Bands came, bands went and in 2012 I was without a band, as my ’77 punk band of 17 years - Tight Finks - broke up. Danny always loved ’77 punk rock therefore he asked me to start a new project. At about the same time Juli asked me the same question. But here we were with 1 guitarist and 2 drummers.  Juli then just decided to step up to the microphone and to be our lead singer. A job he since then does in such a perfect way! An old friend of ours was happy to fill in on bass and there we were: Nasty Rumours!

Tell me about the first time you heard punk rock music?  What record or song was it, when was it, where were you and who first introduced it to you?  If you can remember all of that of course!
JULI: I remember at school the whole Skate-Punk and Melodic-Punk thing was very in trend. All these big bands from “Fat Wreck” and “Epitaph”.  At that time my older brother was introducing me to The Clash, telling me that this was punk of the first hour! It was also my brother who introduced me to the music of Tight Finks. Thanks to those guys I discovered the whole old school punk universe. I’m younger than my bandmates in Nasty Rumours, as you may already know. As a young teenager I was at their shows, going crazy. To be growing up with their music and now being in a band with them is kinda cool!

JAMOUS: In school there was this guy Tony who was totally in love with The Beatles. The only other band he let “intrude” his ears was Die Toten Hosen out of Germany. In 1987 they released a live album Live – Bis Zum Bitteren Ende and this Beatles dude Tony taped the album for me, which then hooked me up with punk rock for the first time. It was also the first time I heard the word “Scheisse” (shit) in a song. It blew my mind, how great was that!!!! Soon after that the Ramones took over and all the other ’77 bands followed…

What sorts of things influence your song lyrics? Are there any subjects you wouldn’t write a song about?
JULI: A lot of things have an influence on the lyrics. I mean anything that creates an emotion is a possible inspiration for a new song. Whether it’s love, hate, boredom or whatever. We are not explicitly a political band but when I’m reading the newspaper or take a closer look at society, it’s clearly affecting me in writing the lyrics. We often end up singing songs about love and shit, though, hahaha.  I can’t think of something that I wouldn’t write about right now. As long as you got something to say, say it! And underlay it with a catchy tune. 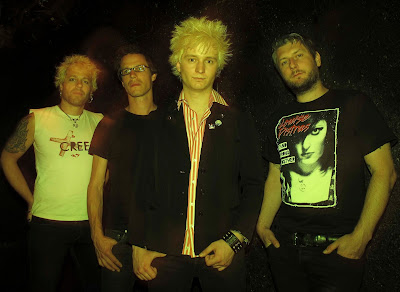 Was the song “Barbwire Heart” (the B-Side of the newest EP on Wanda Records)  inspired by true events?
JULI: It’s fiction. But anybody who has been rejected and felt like a crushed bug knows what it’s all about.

Nasty Rumours is currently based in Bern, Switzerland.  When I think about Switzerland and rock music, I think metal.  Maybe because of Krokus or Celtic Frost.  What is the music scene really like up there now?  Is there a supportive crowd that goes to punk shows?
JAMOUS: That’s really funny to read! When I was 9 years old I listened to Krokus a hell of a lot. Heroes they were... hahahaha! The problem in Switzerland is, that it is very very hard to earn your living with music. So there is very few bands that are known internationally. Like Krokus, Celtic Frost, Gotthard, Yellow, and Bonaparte.  But, like in every country of this world, of course there are thousands of musicians and bands in Switzerland, too. There’s a huge underground scene, a D.I.Y. scene. Bands work quite hard to be able to play shows and to release albums. There’s every kind of music scene in Switzerland, every kinda music played - so of course there is also a Punk scene here, but it’s not as big as in places like the U.K., West Coast cities of the USA, Washington DC, NYC, Berlin, big places like that. It’s a small scene, but when there’s bands touring through Switzerland people often travel quite a distance to catch the shows. But on the other hand it’s not uncommon that you can watch the U.K. Subs plus The Vibrators playing a show in front of just 30 people! Sad!

And speaking of metal I was reading an interview with Bruce Dickenson of Iron Maiden and he said that punk is rubbish, the people playing punk music can’t play and if given a choice, people in punk bands would rather be in metal bands surrounded by porn stars.   What do you guys think about that, is he half right?
JAMOUS: Nothin’ to say to this one… I’ll have to take a break now, as I have to burn all my Iron Maiden LPs… Strange quote! The first two Maiden LPs had a great touch of Punk in them… Next question, please…

What kind of feeling or sentiments do you hope your audience walks away with after seeing a Nasty Rumours show?
JULI:  I hope they’re all exhausted from going crazy during the best concert of their lives, haha! No seriously, of course I hope our audience is having a good time and that they enjoy themselves and our music.

It seems a lot of the band’s influences come from punk and rock n roll bands that were in their prime decades ago.  Do any current bands influence you and your music?
JULI: Yes, of course. That’s the beautiful thing about music; you’ll always find new bands that will blow your mind. I’m a huge fan of 70’s punk bands and I listen to those old bands a lot. They made a lot of people to what they are today, including me. Those bands still matter.  But don’t close your eyes and ears on new bands. There are tons of inspiring new bands I could name you. Currently nonstop on my record player: Impo and the Tents, the Achtungs, Generacion Suicida.

JAMOUS: For me one of the biggest influences for the music I play are The Boys, Ramones and The Adicts - but they’re from the “old” scene and that was not your question… I’d say looking at current or “modern” bands I have to mention The Briefs and The Cute Lepers. Huge influences! They both brought a sweet side back to punk rock with cute melodies and bright colors. Thanx, Mr. Steve E. Nix!!!

Where can people go to hear or buy Nasty Rumour’s music?
JAMOUS: We play shows in Switzerland of course but always try to travel to other countries, too. So check our homepage regularly as in the “Show” section you’ll find out about when and where you can catch us live. To buy our music you’ll simply have to come to one of our shows and feast on the merchandise table or you’ll hit our Bandcamp site. Also check the shops of our Record Labels “No Front Teeth” and “Wanda Rec.” if they have some 7” left.

What is in the near future for the band, any touring or new records in the works?
JULI: There is going to be a release of another 7” single soon, it’ll be called Dilemma and will be out on Wanda Rec.  We’ll play a couple of shows in Germany, in the Czech Republic and Switzerland at the end of this year.

Posted by Audio Ammunition at 8:14 AM