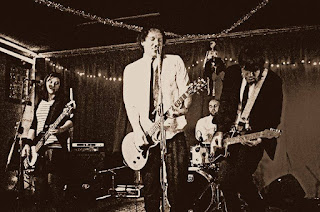 Ohio’s Spastic Hearts seem to be hopeless romantics and if you’re going to sing about romance, relationships, and broken hearts you have to lay it all out there on the table and let the world see your cards for the music to sound genuine. That’s what makes rock n’ roll so great, that’s what turns bands and songwriters into legends and that’s what puts Spastic Hearts right up there on the top shelf as well. Exposing your soul out there on stage or on a record in song form for the world to judge and pick apart to me seems infinitely more difficult than going on stage and hiding behind a mask of anger, cynicism or goof ball humor. You can scream and sweat into a microphone all you want about all the injustices in the world to stoic faces in a crowd, but a real soul to soul connection with music is what really incites changes in people.

Give me a quick rundown on who’s currently in the band and what everyone does in The Spastic Hearts:
Jay Dee – Vocals/Guitar
Angi Phalangee – Bass/Vocals
Mikey Reynolds – Guitar/Vocals
Casey - Drums

Your band bio states you guys came together in the spring of 2012 and released your debut album in December of 2012, that’s pretty quick!  Did one of you have songs already written or did you guys just really gel together that quickly?
JAY: Ya things came together quick! I was in another band with our drummer and we broke up. I wanted a group that was more of that ‘50’s type sound but of course punk rock influenced as well. It helped that we have all been friends and have played music in some way with each other before. It’s the first time all four of us have been in a band together though. A lot of the songs were written that year before recording. I had the shells of the tunes and we hashed them out at practice. The debut record was a lot of fun.

Tell me a bit about how you all met and decided to form Spastic Hearts:
MIKEY: I used to play in a band called the Reynolds with Casey before moving to Florida. Angi and I moved there for college and to rock in a band called The Hi-Life. We moved back home in 2010. Jay and I have always played music together and collaborated well writing songs and that seemed to pick back up quickly. Not sure when or how, but the four of us decided to start the Spastic Hearts. The four of us seem to complement one another perfectly musically, so it just made sense. Making great music is the mission.

You guys are from Youngtown, OH. What is it like playing live in your town? Is there a supportive “scene” out there that are into what you guys are doing musically?
MIKEY: Although a smallish scene, we definitely have a good time playing here at home. There are really only two venues that matter, Cedars and the Royal Oaks…we pack them both ha, ha.

JAY: It’s not what you would call a punk scene at all. We have good bands and good people though. You can make a scene if you really want one.

Razorcake Magazine said this about your record: “This is the kind of record I put on the turntable when I’m in a bad mood because you can’t possibly continue feeling upset when something this catchy and infectious is playing.” Is there any particular band or record you can put on that can pretty much lift you out of a bad mood?
MIKEY: Chixdiggit will always snap me out of a bad day. The Influents seem to make a good day even better.

What records do you own that you listen regularly and possibly draw inspiration from that you think a lot Spastic Hearts fans may be surprised you like?
MIKEY: Van Halen . . . shouldn’t be surprising ha, ha, but they rock.

JAY: KISS, Also not surprising. I did listen to Mathew Sweet the other day: 100% Fun, Really good. I’m not into anything popular or even semi popular right now though. I’m not even talking about radio either. I used to remember being excited because every month something new was coming out. I can’t tell you the last record I bought or was waiting for.

A lot of your songs are about love, girls and relationships. Have you ever written song lyrics that you regret, that were maybe a bit too personal? Has there ever been anyone that’s been offended about the songs you’ve written about them?
MIKEY: Nope. Jay???

JAY: Never. I mean looking back it’s funny to see what you were singing about 15 years ago, in the end though it’s just songs about girls, just better songs and recordings now.

Can you remember the first time you heard punk music?  Where were you, who introduced it to you and how did it make you feel?
MIKEY: Green Day changed my world…I never felt anything real until I heard them.

JAY: I remember it like yesterday finding the Queers “Move Back Home” then seeing the Riverdales open for Green Day on the Insomniac tour. The Dookie record kinda changed everything though. I was told about it in High School way back when and I’m sure it was the same feeling 20 years earlier those kids had when they first heard the Ramones. No one was going to play like Eddie Van Halen in the ‘70’s and I wasn’t going to play like Kirk Hammett in the ‘90’s. I didn’t need to.

Where is the best place to go or log on to hear your music or buy your records?

What does the near future look like for The Spastic Hearts, any record or tour news?
MIKEY: Recording new music is never boring right???

JAY: Touring doesn’t look too good, I’m sure another record.

Posted by Audio Ammunition at 12:11 AM