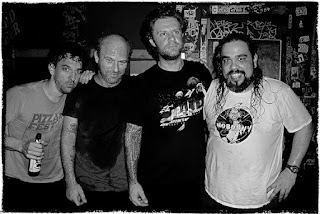 Orlando, Florida's Golden Pelicans play a mean, sweaty, hard hitting style of punk rock that I haven't heard done well in decades. Picture a singer with a vocal style somewhere between Tom Waits and Motorhead's Lemmy and a band backing his every move that's so powerful, I'm pretty sure they could have single handedly victoriously stormed the beach and Normandy, won the Vietnam War, and chased those nasty aliens back to their home planet in Independence Day. Golden Pelicans music comes at you pretty hard and fast yet it rides on a wave of good ol' fashioned rock n' roll riffs in the same way The Dead Boys or X (Australia) music did. The band is getting ready to release their second LP on Total Punk Records later this summer and from what I've heard so far, is heavy enough to throw the earth off it's axis.

Let’s start out by telling us who’s all in the band and what everyone does in the mighty Golden Pelicans:
ERIK: Rich is on drums, Sammy plays bass, Scott strums the guitar, and I sing and dance.

You guys are in Orlando, FL; tell me a bit about your town. Is there a good supportive crowd out there that goes to shows and gets what you guys are doing musically?
ERIK: Orlando used to be a nice sunny town with drinkable water. These days it's roving street gangs, rabid pit bulls, and the constant yellow swirling chemical smog that blots out the sky.

Tell me a bit about what bands influence Golden Pelican’s sound.  How would you describe your music to someone that’s never heard your band?
ERIK: I think we sound like a broken margarita glass being farted out of a prolapsed butthole. 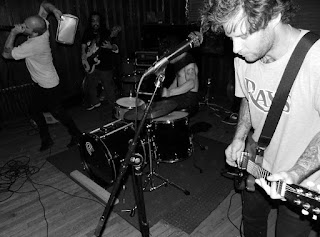 You guys released your debut LP last year on Total Punk records.  One thing that impresses me most about your band is the ability to capture such a raw primal energy on your recordings.  Did that come easy for you guys and why do you think it’s so difficult for so many other punk bands to do this?
ERIK: I imagine other bands are up there in there skyscrapers having some jerk with a ponytail telling them about the real rock sound, and what's gonna get them the best trim. Well, not us.

And speaking of the LP it made Pitchfork’s Shake Appeal top releases of 2014 (As well as in my 2014 top 10 if I may add, ahem!)  Have you been surprised at how well received it has been by so many people?
ERIK: Thanks, it has been great. 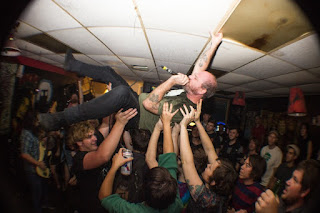 One more quick question about the LP, this one I must admit is for my own personal curiosity.  Tell me about the KILLER cover art:
ERIK: The art is by Mac Blackout. He is amazing. We wanted to get like a cosmic pelican with a space orc tearing ass across the galaxy. Came out great.

Judging by your music, I can imagine your live shows can get pretty intense and out of hand at times. Tell me about the most memorable Golden Pelicans show, good or bad:

ERIK: We like shows in the south a lot. We had a real fun one with Blind Shake in Minneapolis.

What sort of feelings or sentiments do you want people to walk away with after experiencing one of your live shows?
ERIK: I would like them to leave with a real cool beer buzz.

Where are the best places for people to go to or log on to listen and buy your records?
ERIK:  floridasdying.com we have a band camp also. The best place is whatever rathole that will let us play, we will sell you stuff in person.

What lies ahead in 2015 for Golden Pelicans?
ERIK: New record out soon on Total Punk, European tour in August. We will probably do another single later on this year.

Posted by Audio Ammunition at 9:58 PM