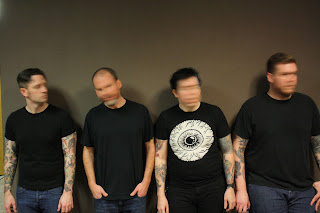 You can’t really tack on any trendy sub genre tags on Pink Smoke’s music. They’re not your new favorite Post, Dark, Psyche anything.  Pink Smoke are however a meat and potatoes punk rock n’ roll band. They’re influenced by bands like The Damned and The Ramones and all the early rock n’ roll; which influenced all the punk bands in the mid to late ‘70’s. They play aggressive and loud and aren’t afraid to add hooks and melody to their catchy shout along songs. So if you’re looking for the answers to life and the universe to be unfolded unto you in cheap metaphors and pop psychology clichés, you may want to look somewhere else. What Pink Smoke can offer you though is a good time at the end of a long hard day, after all isn’t that what anyone has ever really needed from rock n’ roll?

Who is currently in Pink Smoke and what does everyone do in the band?
Clint – Vocals & Rhythm Guitar
Brandon – Backing Vocals and Bass
Ryan – Drums
Matt – Lead Guitar

How did you guys all meet and decide to play in a band together?
CLINT: Matt and I have been friends and bandmates since around 2004. We’ve played in many different unremarkable bands in our time. I met Brandon through Craigslist in 2010 and I immediately wanted him in my old band at the time because he looked like Dee Dee Ramone and Glenn Danzig had a child. And he was talking about only knowing like 4 notes. I was in! Matt has known Ryan for quite some time. I haven’t known him that long, but he is a great guy and has a good sense of what he’s doing back there. He is our 3rd drummer. Spinal Tap syndrome…

How would you describe your bands sound to someone who’s never heard you guys before?
CLINT: There are 2 responses. If it’s someone who’s into whatever our “genre” is, I’ll say, “If you like Slade and Rocket from the Crypt, you might like us.”  If it is someone who I know is very unfamiliar with punk or rock n’ roll, I’ll just say “We sound like the Ramones.”

What sorts of things influence your song lyrics? Are there any subjects you try and stay away from for whatever reason?
CLINT: I just kind of do “stream-of-consciousness” type stuff. When I try to have a subject directly, it’s usually just stuff related to what millions of people have to deal with: Shitty jobs, shitty people, and feeling like your life is going nowhere, relationships . . . blah, blah, blah, angst, as far as subjects to stay away from?  I just don’t wanna get too political. Nobody cares. Let’s just have fun and play loudly.

I’ve heard a lot of people say that writing and/or playing music is therapeutic to them.  What do you think, has music ever helped you through a tough time?
CLINT: Yes. The lyrical part isn’t as important as the playing part. Just playing music has a healing power for me. I can kind of jump out of my skin and act like a maniac and no one really thinks twice about it.

I noticed your band has a Facebook page, and you’re on Tumblr and Instagram as well. Do you think social media has become an essential part of promoting bands and records? Do you think anyone can survive these days without having some sort of presence on social media somewhere?
CLINT: There is an ever-increasing amount of bands that are rejecting social media and just living by word-of-mouth and touring like the “good old days.” It seems to work for bands that have a very strong backing from labels and zines that will do all the promoting for them. It also seems to work for bands that aren’t bound to a full-time job “pay rent or you’re screwed” type situation like us. Unfortunately, we were never the popular kids and don’t have enough underground pull to be that cool and know a lot of people. There is so much competition out there. Especially with the type of music we play. Social media is the only reason anyone even slightly cares about us. We try not to over-saturate though. It’s annoying when bands do that. Plus, bands on social media are aware that Facebook will not let people see most of your posts unless you pay money to Facebook. Who wants to do that? I hear it’s mostly fake “likes” anyway. I’d rather have 2 people “like” the page that care than pay for 200 fake “likes.” We’re not trying to be a huge sensation. We’re smarter than that. 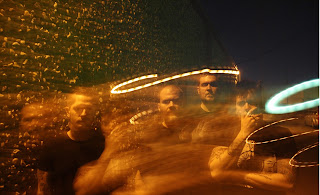 There have been some pretty good bands to come out of Denton, TX, but how is it like to live there now and play shows?  Is there a supportive crowd that gets what you guys are doing musically?
CLINT: Denton is a ghost town right now for our kind of music, even when really great rock n’ roll and punk bands come through you’ll maybe see a half-full venue. Drone, noise and electronic music are actually what are really popular in Denton right now. Punk house shows are on the rise though. There seems to be more people putting them on now. And as a result, way more people come out because you’ve eliminated the need for people to pay and be a certain age. We plan on getting in on that in 2015. On a side note, we’ll always pay respects to the Denton bands that got outta Denton and made themselves known: Riverboat Gamblers, Marked Men and Bad Sports to name a few.

And speaking of shows, tell me about one of the most memorable Pink Smoke shows, good or bad and what made it stick out in your mind?
CLINT: They totally turned on “La Bamba” when Matt was playing his solo! Oh, seriously? Do we have memorable shows?  I think what I find memorable are the shows where stupid things happens. Like one time we played this now demolished “club” (more like big garage) in Dallas. We weren’t told there was a frat-bro paintball party going on at the venue that night. The door guy said we had to pay for our own girlfriends to come in and we wouldn’t get paid. This was our second show, so we just wanted to play. We got a bunch of paint thrown at us and got cut off during our last song when the drunk sound guy decided he REALLY needed to hear “Cowboys From Hell” by Pantera RIGHT NOW. Looking back on it, I should have told them to go fuck themselves. I would now. We kind of have a thing now where we try to clear the venue on purpose, which isn’t hard because not a lot of people come out usually. We just play really loud. If there are any people left after a show, Brandon and I will look at each other, shake our heads and say “Well, we ALMOST cleared it, maybe next time!”

I was reading an interview with Keith Richards and he said that anyone buying digital music is getting short changed. Do you agree with this statement?
CLINT: On one hand, I’m all for digital music. Things like Spotify have made almost any band on the planet accessible. I only use Spotify on my phone now for music. It cleared a whole bunch of room and I can listen to most of the same stuff I have at home. Except Kate Bush’s “Hounds of Love” album which is mysteriously missing from Spotify. That kinda brings me to my OTHER hand. I really enjoy having the physical document of a lot of music. I own a lot of LP’s, 45’s, CD’s and cassettes. I am known to spend hours in our local record stores when I have the time and the money. There’s something about having that piece of history in your hands and being able to touch and smell it. It’s wonderful. Keith Richards knows nothing about change. He only uses $100’s.

Tell me about the one band or musician that you feel has inspired you the most in your life.  Tell me about the first time you heard them and how it affected you:
CLINT: I come from an ‘80’s Goth background. When I was a 120 lb. 15 year old with teased hair and shaved-off eyebrows, I’d fill my stereo speakers with Siouxsie & the Banshees, The Cure, Joy Division, Sisters of Mercy and Alien Sex Fiend. In fact, I remember the first time I saw a picture of Nik Fiend. I was about 14 years old. I immediately had to find out everything about this weird, gangly creature. I went out to Hot Topic and they had this little Cleopatra Records compilation called Songs To Wake the Dead. The first song was a re-mix of the Alien Sex Fiend song “Magic.” I was forever changed. SO the short version is – ever since I saw Nik Fiend of Alien Sex Fiend when I was a kid, I knew I wanted to do something that would piss off cops, parents and teachers. Then I got into punk when I was about 18 and saw Dave Vanian, who was naturally the Gothiest punk out there. He was a huge inspiration. In fact, sometimes in October I do a Damned tribute band called Stab Yr Front. It makes more money than Pink Smoke.

Where can people go to hear or buy your music?
CLINT: At shows and online.
pinksmokeband.bigcartel.com  –  Merch and music
pinksmoke.bandcamp.com

What lies ahead in 2015 for Pink Smoke?
CLINT: We have a new album coming out! It’s called Weirdorama and it was recorded at Cool Devices Studio by Mark and Jeff from the Marked Men, just like No Party. We are doing everything ourselves, so it’s slow going. We hope to have CD’s and cassettes in hand by June and plan for a release show in July or August. On top of the new record coming out, there will be a heck of a lot more shows, a ton more merchandise and loads more alcohol and burritos that need to be consumed.

Posted by Audio Ammunition at 12:18 AM