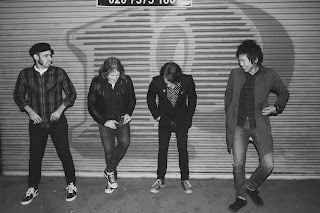 
London’s Los Pepes have been singing their anthems of heartbreak and despair at high decibels for a few years now, releasing a few EP’s and a marvelous, critically acclaimed LP last year titled Los Pepes for Everyone! on Wanda Records. Now they’re getting ready to release their fourth EP called And I Know/Say Goodbye also on Wanda Records.  What this band has been doing from their inception is taking Small Faces and Beatle-esque harmonies and adding some angst and crunch to them, much like The Boys and The Jam did back in the late 1970’s. They started out with that blue ribbon recipe since their first demo tape and keep perfecting their own unique take on rock n’ roll with each release. Los Pepes; they’ll make you wanna dance, they’ll make you wanna break things, and when the dust settles you’ll wanna call the one that got away.

Let’s start out by telling me who’s all in Los Pepes and what everyone does in the band:
BEN: Los Pepes’ home is in London but it’s an international organization. We have members all over world from Kyoto to Los Angeles. Due to geographical constraints and various visa headaches you never know who’s going to be there. Currently you’re going to see/hear some configuration of these guys: Myself - Ben Perrier (vocals/guitar) Gui Rujao (guitar/vocals/drums) Seisuke Nakagawa (bass/vocals) Kris Hood (drums) Adam Smith (bass) Shaun Clark (drums).

How did you guys all meet and decide to play in a band together?
BEN: Just over three years ago now I started this up. I had a bunch of Testors style punk rock lying around that I wanted to play. I got together with Jay (the original drummer) and recorded it in an afternoon. That was all it was really gonna be. This was under the name Los Pepes. It wasn’t until Seisuke got involved that the ‘Pepes of today started shaping up and things got going. Back when Seisuke lived in London lot of time was spent smoking cigarettes and listening to 45’s. That’s when we got driven to do things properly. 100% drive to make something that we really like. We should have played music together a long time ago so we’re making up for lost time. That’s why we have to write a lot of songs. As long as we write songs there will be Los Pepes. All the other guys have been met along the way through a mutual love for the same music and the need to play it.

Did you have an idea of what you wanted Los Pepes to sound like or did the music kind of take on a life of its own once you guys all started playing together?
BEN: Well, like I said originally it was very straight down the line high-energy punk rock. It’s completely changed since then. I’m not even sure how it changed so much into a power pop thing but it did. I guess smoking all those cigarettes and listening to those 45’s. I’ve always loved writing melodies but hadn’t done anything with that too much in previous bands. The delivery is still real high-energy and punk and that will always be cuz that’s who I am, same for the other guys. Only now the focus is songs. We want to write the best songs we can that’ll do something for someone somewhere. With guys like Seisuke and Gui around there’s a good team working on that.

I don’t normally ask bands about their names, just because it’s a bit of a cliché, but I find the name Los Pepes particularly interesting just because it’s a bit political and you’re music really isn’t. What was it about the group Perseguidos por Pablo Escobar that you found intriguing, enough to name the band after them?
BEN: Ha. Yeah that’s exactly where the name comes from. We have nothing to do with Columbia or Pablo Escobar and you’re right we’re by no means a political band. I did read “Killing Pablo” many years ago. It’s not even a very good book, more the kind of shit you would buy at an airport or something. It is a great story though. I actually have a friend whose family fled Columbia for the UK because of Escobar. He’s fucking crazy unsurprisingly. More to the point Los Pepes sounds like a Spanish garage band with a horn section or something, which is very misleading. Misleading people is always good. Give them one more reason to write you off before they listen to it. 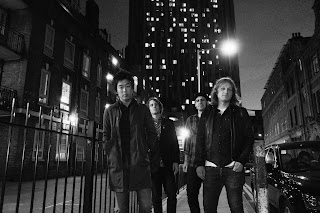 What sorts of things typically influence your song lyrics?  Are there any subjects you try to purposely try to stay away from?
BEN: It’s mostly stuff that causes you trouble that you write about I find. You write a song and you feel better. I guess love and all that stuff is one of the biggest sources of trouble for human beings so that features pretty significantly. There’s other stuff in there too. A drop of nihilism here, a fuck you there…sarcastic humor about things but mostly its love songs. That seems to be where it’s at at the moment. As far as staying away from stuff, we basically play rock and roll but I hate all this self-aggrandizing bullshit. You know, that “hey bitch, I’m so motherfuckin’ rock and roll” business. I see that around and I know those guys are full of shit. Unless you’re the real McCoy like GG Allin or something I ain’t interested. I don’t give a shit what anyone thinks about me, I can’t understand why you would want to tell everyone how “badass” you are. On the other end of the spectrum overly sugary “I love you baby” stuff also gets annoying real fast.

I was watching an interview with John Lydon and he was talking about how much he hates Green Day because “there’s nothing about them that’s original, they don’t do anything that’s their own.”  What do you think about that statement?  Do you feel a band has to be “original” to be significant?
BEN: That’s good question. The way I look at it more or less all the music I like is not from today. There are exceptions but then even the new bands I like don’t really sound new. I got the Sleaford Mods new album the other day and that is pretty original but it’s basically still punk in many ways. The music we make is heavily influenced by old music, most obviously ‘70’s/’80’s punk. But there’s a difference between that and being contrived. We write a song, that’s a new song. It belongs to us and it’s not some rehash carbon copy of something else just to be retro or cool. It maybe inspired by other music but it has new energy. That’s because it was written in an honest attempt to make something good that didn’t previously exist. If that isn’t original I’d say it’s still significant somehow. Fucking hell, it looks like the Romans ripped off the Greeks when they put up all those pillars but who gives a shit. If I were lucky enough to be a figurehead of a major musical and social movement in late ‘70’s Britain maybe I’d also wave my finger at soft targets such as Green Day. My issue with Green Day is I think they suck.

This is the “lightening round” portion of the interview.  Feel free to elaborate as much or as little as you’d like to the following questions:

1.     What was the first concert you attended without your parents?
BEN: I’m pretty sure it was the Melvins at the Garage in London sometime in the mid ‘90’s. I was born in 1981 by the way.

2.     What was the first band T-Shirt you owned?
BEN: I think it could well have been a Melvins t-shirt from that very show.

3.     What was the first record you bought with your own money?
BEN: I can’t remember exactly but I’m pretty sure it was an AC/DC record, probably either “Highway To Hell” or “Back In Black.” It was definitely something that said “kid getting into rock and roll for the first time.” More significantly, at a similar point in my life I remember hearing “The Passenger” by Iggy Pop. I really liked it a lot. I went to the record shop and asked for Iggy and the guy sold me Stooges Raw Power no less. My life was changed. I was very young and I couldn’t believe what the hell was going on with that record. I’m so glad that guy sold me the wrong record.

4.     What was the first band or musician’s picture/poster that you put up on your bedroom wall?
BEN: Something either grunge or ‘80’s US hardcore punk, that how I rolled as a kid. I still believe Black Flag are the greatest band of all time. 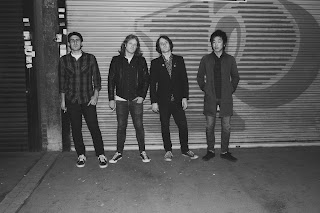 Where can people go to listen to or buy your music?
BEN: You can buy records and listen to our music on our bandcamp page: www.lospepes.bandcamp.com and also from our label Wanda Records: www.wandarecords.de we’ve also got all that facebook stuff here: www.facebook.com/lospepesmusic

What lies ahead in 2015 for Los Pepes?
BEN: Well, we never stop. Like tuna fish. We got a new EP, “And I Know/Say Goodbye” coming out again on Wanda Records late May and will be on tour in Europe at the same time (tour dates below). We’re also recording a new album. In a weeks time from writing this interview we’ll be hitting the studio with new songs and new ideas. Soon as that’s all done will be putting it out and getting out playing to people as much as we can. We really need to go to Japan too. That’s an important next thing for us to do. Sayonara folks.

Posted by Audio Ammunition at 12:32 AM