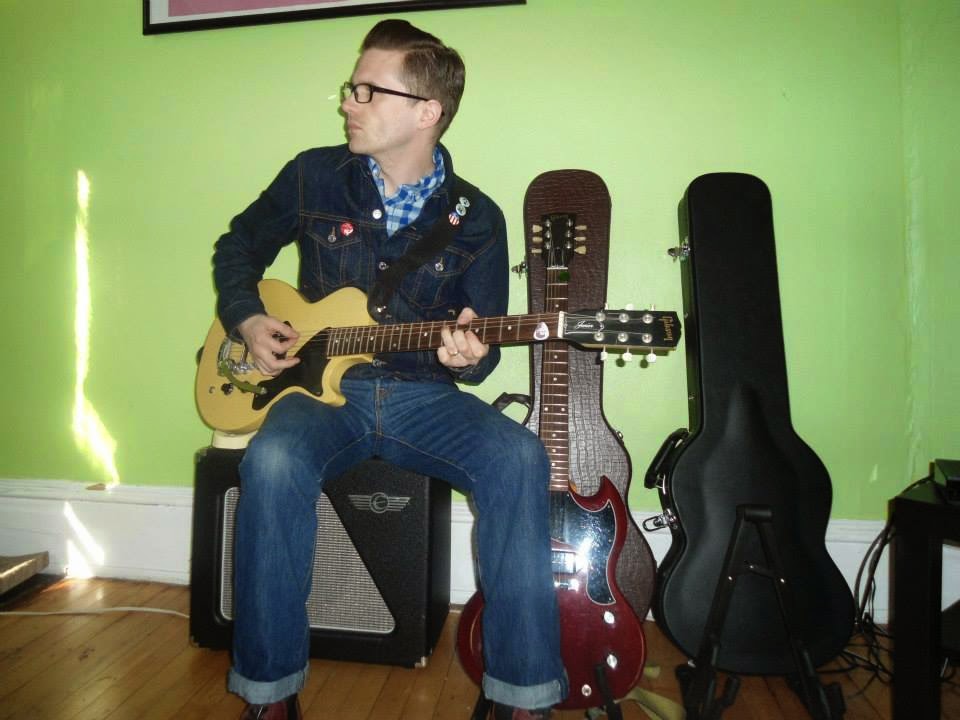 In the late 1990’s, The Dimestore Haloes, along with a handful other bands were the soundtrack to my young adulthood. I felt a connection with a lot of these bands not only because of their greatness but also because they were all around the same age as me. Then suddenly they all started retreating back to the corners of the country from which they all came. This was now the mid 00's, a time in underground punk that I call “the dark times.” A time when good bands and labels were few and far between, compared to the salad days of the mid to late 1990's that is.  But now it’s 2014 and the genre is experiencing a resurgence of sorts and Chaz and Kevin of The Dimestore Haloes are back, this time as The Cheap Cassettes, a glam, power-pop powerhouse that hits you like a pair of difibulators to the chest. The Cheap Cassettes are here to send Rock N’ Roll energy back into the pulse less hearts of America!

First off, I want to thank you both for taking some time here for us, we appreciate it!
CHAZ: No worries, I’ve got the day off work and I was spending it watching old Kix videos on YouTube. In my underwear, trust me you are not interrupting anything important.

KEVIN: No problem. Glad to be here.

Let’s start with introductions: who are you guys and how do you help fuel the Cheap Cassettes Rock N’ Roll machine?
CHAZ: I play guitar and sing. I write a good portion of the songs. I play Gibson guitars and I use Dr. Rubin’s hair grease.

KEVIN: I play drums, some of the bass, a little rhythm/lead guitar and some backing/lead vocals. I also ended up doing most of the mixing/mastering/album art.

You guys used to be in a much beloved band of the late 1990’s early 2000’s called The Dimestore Haloes.  What led to the decision to put the brakes on that?
CHAZ: It just kind of fell apart in 2003. We had done four full length records and a bunch of singles and had a bunch of different line ups, and it seemed like it had run its’ course. Then Kevin left Boston for Hawaii, so that ended that. I had always kind of hoped we’d do more someday but then after our original drummer, Jimmy Reject died in 2006, it just seemed more definitely over with.

KEVIN: I always end up taking the blame for that one ha ha. Let’s just say that our bass player at the time literally couldn’t play and we had some other issues. That and I followed a girl half way across the world.

I was reading the bio on The Haloes Facebook page and it read “Made some great records nobody heard, played some great live shows few people attended,” do you plan to try a different approach with Cheap Cassettes so that this isn’t the case again?  Do you think if social media was as prevalent then things would have been any different?
CHAZ: Well, the thing for me is this; we are from a different generation of Rock and Roll type people, and unlike a lot of kids today, we never learned to be businessmen. We never had a manager, we never had a booking agent, we haphazardly did everything ourselves, and while we were great at writing songs and playing guitars and looking cool onstage, we were not good at those practical, real world aspects of the business. Looking back, I am satisfied that we are still known and remembered by a clued in elite, for lack of a better term, who were very into the more interesting bands from that era. I think those types of people are happy that, unlike the Dropkick Murphy’s for instance who started out in our scene and quite quickly became more of a mainstream thing, the Haloes still sort of belong to the underground. As far as doing anything different with the Cheap Cassettes: probably not ha ha.

KEVIN: I can’t really comment too much about the records and live shows. I think I played on one 7” and the last album? I was just glad to have been part of the whole disaster! To me, the real Dimestore Haloes was always Chaz, Jimmy, Lorne and Marcus so as far as a different approach: I guess the way we are going about the whole thing is pretty unique. If social media was prevalent when I was in the band I wouldn’t have had to mail out press kits and make follow up calls on my land line phone ha ha. 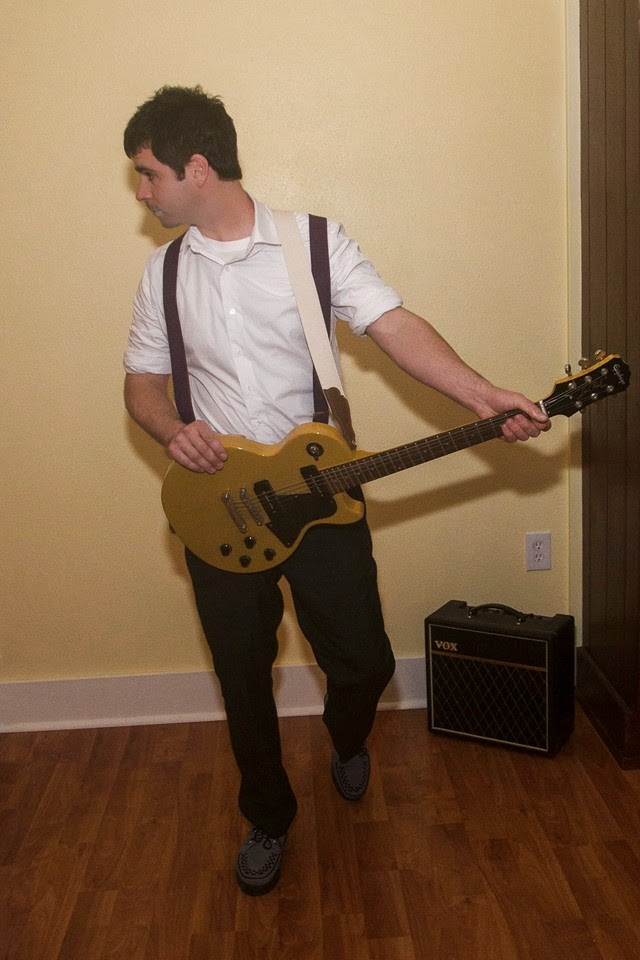 So the collection of songs you have up on your Bandcamp page (cheapcassettes.bandcamp.com) has been a long distance work in progress.  Recording took place on the east coast and mid west and then there’s Hawaii? How did you end up there and has it been difficult piecing everything together in this manner?
CHAZ: Kevin has lived in Hawaii since the mid 2000’s, I left Boston in 2011 and have lived in Ann Arbor, Chicago and Madison, Wisconsin since then. We’ve done the record one piece at a time, emailing tracks and lyrics back and forth. We only “speak” via text and email. Neither of us likes talking on phones. We’ve seen each other and hung out a few times when Kevin is on the mainland, but we haven’t physically played together in a little over ten years. So it’s a weird thing, but it’s a great Rock and Roll album that came about in an unusual way. We still rock like murder, as somebody once said.

KEVIN: Like I said earlier, I ended up meeting the love of my life and followed her. We ended up coming back to where she grew up, Hawaii. For various reasons we had to stay. It sounds cliché, but it’s true! Chaz approached me sometime in 2010, I think, about making a long distance record. I thought it was a great idea and we kind of worked out a way for him to send me tracks online. I then recorded my parts (drums, some bass/guitars/backing vocals) at my house and mixed everything down. It hasn’t really been difficult at all. In fact it’s been kind of seamless. The only trouble we run into is that we are both really busy and two weeks turns into two months turns into two years.

I loved that you covered “Happy When It Rains” by Jesus and Mary Chain, Darklands is one of my favorite records of all time! Is there any music that you guys listen to that you think may surprise some of your fans?
CHAZ: I listen to everything from old country and rockabilly to power pop, blues, new wave, heavy metal, post punk...I like guitar music, and I like good songs. Genres and haircuts and shoes don’t really matter, as much to me now as they did when I was a feisty youngster.

KEVIN: I suggested that we each pick a song to cover and I ended up choosing that song. I remember having a list of songs that I wanted to tackle and that one just struck me. I don’t think anything I listen to would really shock any of our fans. I have been listening to The Replacements last two albums non-stop for about two months now, that may ruffle some feathers!

Chaz, I read your post How to Be a Well Dressed Man about Town, Spring 2014 Edition on your blog http://chazmatthews.blogspot.com and I absolutely loved it especially that you kept affordability in mind.  Tell me a bit about what led you to write about men’s fashion and have you had any thoughts about a career in that industry?
CHAZ: I’ve always been into clothes, and history, and retro fashion. Even in the Haloes era, I was very into rockabilly and doing the whole ‘50’s thing. It’s evolved since then for me, and a lot of the stuff I’ve always liked is accidentally in fashion now, maybe because of TV shows like “Mad Men” reminding people of how cool people dressed in the ‘50s. I think its fun to write about things I like, that’s what blogging is about I suppose, and one of the things I like is the timelessness of that certain era of style. I also love those old ‘70’s and ‘80’s glam rock looks, but as you get older, those looks don’t age so well. The ‘50s and early ‘60’s look is timeless and it’s also very Rock and Roll. I would include the mod and skinhead fashions with that as well. You can age well in those looks. As for a career in fashion, I wouldn’t have the slightest clue how to proceed there.

Besides the Dimestore Haloes and now Cheap Cassettes, you guys have been involved in a few other musical endeavors, can you tell me about the absolute worst shows you guys played and what made it so disastrous?
CHAZ: Saints In Vain and Streetcar were bands I was in pre-Haloes that never really released anything. All I have for this question is that in the Haloes days, we considered it very punk rock to be under rehearsed and over lubricated with alcohol and that led to a lot of things, some good, some not so good. We considered tuning your guitar to be kind of something fancy rock stars did, and we wanted no part of it. Those were different times.

KEVIN: I wasn’t in any of Chaz’s old bands, so I can’t really comment. I was in a few bands in the mid-late 90’s that nobody has ever heard of though. Sputnic, The Hanks, The What-Nots, Lugano etc. The What-Nots actually opened up for the Dropkick Murphys in 1996 I think. Downstairs Middle East, we sucked so bad. When I was 16, I ran a record label/distro out of my bedroom. I released two 7” records by Sputnic and a cassette tape of a band called Plankton. 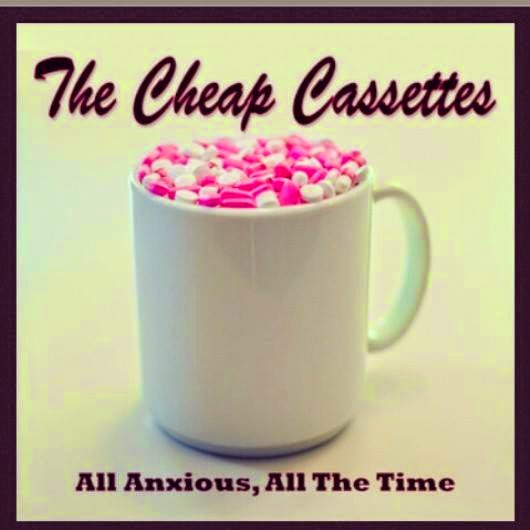 There are a lot of retro influences in Cheap Cassettes sound, like old power pop, mod, glam, ‘50’s Rock N’ Roll etc. In your travels, have you found any current active bands that inspire you?
CHAZ: Oh yeah, lots. I love the Strypes. I love almost all of the bands on Wild Records, especially The Dragtones. I love the Crazy Squeeze from L.A., Giuda from Italy, Lion’s Law from France. I like JD McPherson and Nick Waterhouse and John Paul Keith and Nikki Hill. There’s so much, I can’t remember it all.

KEVIN: To be honest nothing new has really grabbed me and shook me in quite a while. I am pretty picky about what I listen to these days. I like to dig back and (re)discover old bands and records. I love The Tripwires from Seattle although they haven’t put anything out in a while. I love when The Figgs release new records. The Swingin’ Utters, The Copyrights. Anything Rusty Willoughby does. The Obits are awesome. Chaz is way more hip to the new bands playing around these days.

What can we expect from Cheap Cassettes for the remainder of the year?  Any tours, new albums etc?
CHAZ: The album will finally have a physical release this year. It’s called All Anxious, All The Time, and there will be a CD to buy some time in the near future. We also have a track on the new Jolly Ronnie/Mooster Records compilation CD. As far as live shows, there are tentative plans in the works and we’ll let you know when we know.

KEVIN: All the songs are recorded and I am currently in the process of mastering the album. It WILL be out this year, we promise. I would love to play out at some point. My wife and I are planning on moving back to the mainland within the next year or so, so you never know. I can already hear people going “Ohhh no.”

Posted by Audio Ammunition at 2:52 PM