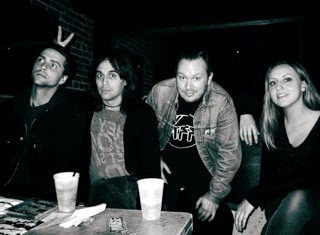 Musically, toyGuitar picks up right where Jack’s former band One Man Army’s She’s an Alarm EP left off. Jack continues his streak of churning out snappy, quick paced, ultra melodic punk rock. This however isn’t your doom/gloom/death and destruction are imminent style of punk rock though. San Francisco’s tG play a style of music that sends you soaring into the stratosphere and before you know it you’re looking at your troubles far below you where they now seem insignificant. Their self titled EP on Adeline Records, that came out in the latter part of 2013, is an adrenaline shot straight into the heart of life itself, its music that urges you to live fast and take chances. Once you play this record all the way through: you’re unbreakable!

Jack, how did you meet these people and decide to play music together?
We met by just being in bands pretty much. Isn’t that the way of it? Miles and I have been playing music together for quite a bit now so being able to play even more music together seemed only natural. Paul plays in the Re-Volts with me and Miles and he plays in the Primitive Hearts, who we love. We saw Rosie play a show in L.A. and at that very instant knew it had to be her playing drums. I think I sent her some awkward Facebook message thingy the very next day. That’s kinda how it went.

From what I’ve read, toyGuitar formed around a handful of songs you had written that didn’t quite fit into the One Man Army arsenal. Is tG a side project or are you guys in it for a long haul?
I kinda wanted to get away from the whole OMA thing. That being said, I have nothing but love for those days and the people who came out and supported us. I really really do. I think it’s important to move forward...meet and play with new people, go different places, try different things ya know? The songs on the last OMA 7inch could have very well been toyGuitar songs or vice versa. I’ve always written what comes out as opposed to wondering if it fits a certain genre. Plus, once my shitty voice gets on the music, it’s all kinda the same handful of songs hehe. I think I can safely say that we wanna play play play, long haul or another day. I love these guys. I wanna write music with them for as long as they want too.

You guys released the EP in digital form first with a physical release afterwards on Adeline Records. What led you to decide to release the record like that?
My brains are mush!! From what I can remember, it was a suggestion from Adeline to stagger it like that I think? I’m not sure. Were actually going into the studio for the toyGuitar full-length really, really soon. Were super excited!

I have read a couple of comparisons made between The Strokes guitar sound and yours. Were they an influence at all when writing or recording these songs?
I guess I get The Strokes comparison?? I mean they do play fender guitars, so do we. I think they have some Fender amps. I think we do. They got a bass. Paul has one too! I think their drummer has a rack tom. We do not though.

I don’t like using the term “guilty pleasure” because I don’t think anyone should be made to feel ashamed of anything they like. However with that being said, what to you listen to that you think a lot of fans may be surprised by?
I don’t like the term “guilty pleasure” either. Like what you like, who cares. I think more than anything Viva ‘L American Death Ray Music has changed me like no other band since The Clash. It’s kinda Velvet Underground, kinda not. It’s got this sleazy, dirty quality to it. It was a HUGE rabbit hole for me. I’m strictly speaking from my perspective of course. I know Rosie listen’s to everything. Paul listens to the Gin Blossoms. Miles listens to Da Lench Mob.

I read that the lyrics to the song “Words Between Us” was inspired by a conversation you had with his young son. What other unlikely things or events have inspired you to write music?
It’s true yes. My son who was 4 ½ at the time was singing “Nothing’s gonna happen to us” over and over again. He said “Not a ginormous earthquake or a wave from the sea” and I think he said “Not an asteroid from space” ha ha. From the mouths of babes right? He was singing into my phone cuz it had a picture of a microphone I think. At any rate, being a first time father it was kinda jarring. Here’s this kid, who literally thinks nothing bad or shitty will ever happen to him. He’s surrounded with love. See’s no color. No motive. He thinks everyone is beautiful and invites them over constantly ha ha. I’ll have him sing into my phone when he’s 18. It’ll be a vastly different song I think. As for other things or events: I mainly write about myself really, not too exciting an admission but it’s good for me to do so. It helps me be happier I'm told.

I read that out of all the different art forms, music has the power to alter a person’s disposition the fastest. Do you agree with this?  Do you have any favorite music that you can put on that will always lift you up from a slump?
I completely agree with it. Certain songs or music can bring you back to places and people you’ve forgotten. Other ones make you cry. Some make you envision and imagine. There’s a power there for sure. I feel like I’m always in some kind of perma-slump, so for me getting to play music is what lifts me up. Sometimes I’ll listen to classical music while I’m driving because I road rage.

The cassette is making a raging comeback. Do you think it’s a viable and collectable form of music or just another hipster trend that will soon go hobbling back to its dark cave of obscurity where in belongs?
I once had an Iron Maiden cassette tape stuck in my car. For. Fucking. Ever. “Can I play with madness…” I have a ton of cassette tapes still. I have nothing to listen to them on though.

Where are the best places for people to hear or buy your music?
On the west coast at our shows. Hopefully soon to be just, “At our shows.”
I’m suppose to know this answer. Adeline? YouTube? iTunes? If you call or text Miles, he’ll send you some.

What does ToyGuitar have in store for us in the near or not so near future?
Were going into the studio really soon, looking at a September or October release. Soooo . . . probably really like an October or November release.

Thanks for the interest!

Posted by Audio Ammunition at 2:33 PM