Durban Poison have been quietly stirring an old black cauldron full of high energy, dark, and driving punk Rock N’ Roll in shadowy woods of Victoria, British Colombia since 2009. They’ve obtained an ancient book of black magic spells, reached deep into its pages and summoned spirits through ritualistic ceremonies that have bestowed upon them similar Rock N’ Roll powers as people such as Cheetah Chrome, Dee Dee Ramone, Suzi Quatro, and Scott Asheton. The men and women of Durban Poison now walk the earth with these powers/curses. Their curse comes to fruition when these individuals, that seem normal when they’re alone, gather together and suddenly chaotic, bruises inducing, riff riddled Rock N’ Roll rips from their souls and melts the flesh off anyone who happens to be nearby. Walk cautiously and listen carefully; you never know when these individuals will be gathering in your town.

Okay Matti, let’s start things off with introductions, who’s all in Durban Poison these days?
MATTI CORVETTE: Well, the current lineup is El Kamino and Me on guitars + an A-list rhythm section composed of Shane Grass (Hot Blood Bombers, Shitty Neighbors) on bass and JJ (DOA, Carpenter) on drums.

How did you all meet and decide to play music together?
MATTI CORVETTE: Originally the band came together from meeting new friends at house parties and everyone just wanting to play music so bad. The first jams were in the UVic art studios until we were kicked out.

As kids, can you remember what band or musician inspired you to want to learn how to play an instrument and/or write music of your own?
MATTI CORVETTE: The Ramones, Joan Jett + The Runaways

I’m sure you’ve heard plenty of people try to describe your sound, but how would you describe Durban Poison yourselves?
MATTI CORVETTE: Rock and roll-y, punk-y, co-ed, fuck I hate describing myself so usually just use what other people have written ha ha, “hi-octane garage rock.”

Your 2011 album Lost In Space has a few nods to one of earths mightiest bands, The Ramones! I get this strange hollow feeling in my chest when I stop and really think about this band being gone. Do you think there will ever be a band like The Ramones that will inspire so many people again?
MATTI CORVETTE: I’d like to hope that there’s that possibility, but I feel it would occur in another genre or sub-genre as the Ramones were that for punk rock. There won’t ever be another ‘70’s punk movement: that happened in the ‘70’s. 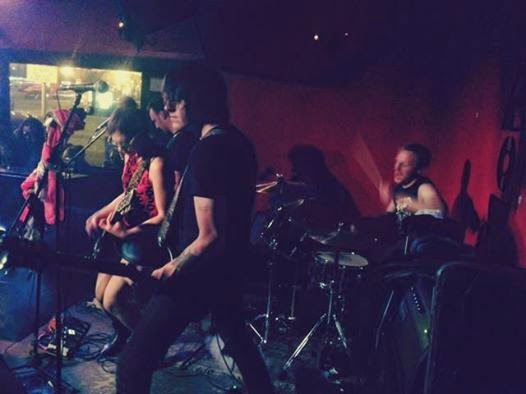 Tell me about the cover of the Thunderwolf EP (which I totally love) and what the song is about?
MATTI CORVETTE: The cover was drawn by lead guitarist in the band, El Kamino, who has done a lot of the art for Durban Poison and various Shake! Records releases.
The song was written about a mythical beast, the Thunderwolf. A few years ago were in Northern Quebec for work and my neighbor gave me this really deadly knife with a Thunderwolf on it for my birthday. The song is about a friend wolf that always has your back and shreds your enemies to bits.

What are some of the most common things that inspire Durban Poison songs and do you remember the most unusual thing or event that inspired a song?
MATTI CORVETTE: Sexual frustration, frustration in general. On Thunderwolf, the idea for Demon Magic happened because someone I worked with told me about when they were young one year at summer camp there was this guy who sat up in like a lifeguard style chair and played a 12-string like all summer and the way they described it was “What is this demon magic?”.

If you could tour with any band in the History of Rock N’ Roll from any era in their career who would it be and why?
MATTI CORVETTE: Ahh, uhh, too many to choose but lets say early ‘90’s Hellacopters. Why? Chill, cool peeps that I think we’d get along with.

I hear some Black Sabbath licks in some of your songs, are you guys fans of Ozzy and the gang and other late 1960’s, early 1970’s rock, if so what other groups?
MATTI CORVETTE:  I used to listen to a lot of Alice Cooper, Motley Crue & the like and yeah Sabbath. It’s kinda fun to go metal for 20 seconds. I listen to so much music from that era, Jefferson Starship I love, Mott the Hoople, T-Rex, Sonics, and Nuggets/Pebbles/Back From The Grave comps.

What is your affiliation with Shake! Records?
MATTI CORVETTE: I own/operate and go broke for Shake! Records. We’re doing 10 tapes in 10 weeks right now, get em’ while they’re hot!!

Tell me a bit about the Shake/arama Festival:
MATTI CORVETTE: Shake/arama happened as I really wanted to tour but couldn’t get people stoked to go across Canada so thought I’d try to bring all my friends bands here (Victoria, BC) for one giant island party its gonna be a blast: over 30 bands for $30! Coolest and cheapest music festival this city has every seen. Huge shout-outs to Animal Productions and CFUV 101.9FM for being mega helps with putting the fest together!

What lies ahead for the band in the last half of 2014 any new albums or tours?
MATTI CORVETTE: We’re going to release a split cassette with Grosser (rad Calgary band) in time for the Shake/arama festival and are playing the outdoor Love-In free show at UVic on June 27th .


Posted by Audio Ammunition at 2:20 PM