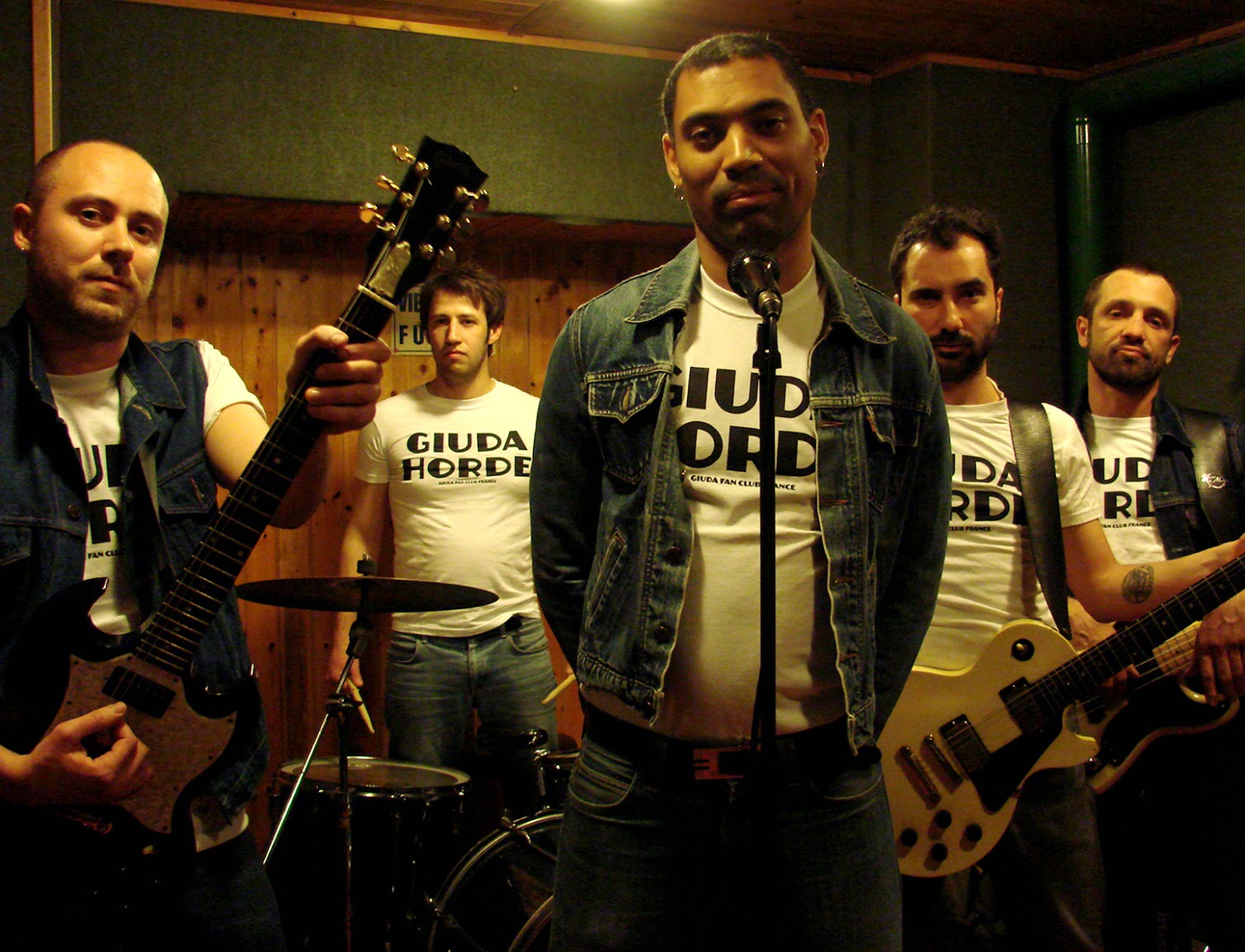 In 2009, Giuda went into the studio to record a bombshell by the name of Racey Roller. One year later this megaton glam/punk debut was unleashed on the world and the fans, press and everyone else in between ate it up. And then nothing, nothing was heard from the Giuda front until last year’s Let’s Do It Again. Instead of glam/punk follow-up, Giuda went straight for the ‘70’s glam era throat by recalling the days of T. Rex, Slade and Sweet and laying that sweet sound on analog tape capturing the pre-punk sounds of both yesteryear and for today.

Where is the band from?
Roma, Italy

How did the band start?
Tenda (vocals), Danilo (bass) and I played together for many years in a band called Taxi, but we broke up in 2007 after releasing our second album, following the sudden passing of our drummer Francesco. Later that year we reformed as Giuda, and went through a couple of lineup changes after that, which is when Michele (guitar) and Daniele (drums) joined our ranks. Our first album, Racey Roller was recorded in 2009 and it came out one year later.

Giuda has really nailed the glam/glitter sound. It’s not just the songwriting, but the instrument sound and tone as well. I had read the Racey Roller was “recorded with vintage all-analog studio.” Was Let’s Do It Again recorded in the same fashion? Can you guys elaborate on how long it took to nail this sound?
In our records the production is fundamental and the analog recording sounds much better than digital. We tried plenty of amplifiers before we decided to use our French ‘60’s guitar amps and we spend long time to find the right outboard gear to record or mix our songs. Recording our first album Racey Roller was difficult because we had no idea how to obtain that powerful drum sound. Let’s Do It Again recording sessions were easier because our ideas were much more clear. We spent six months to making it.
We really have to thank our sound engineer and producer, Danilo Silvestri, for his competence.

I noticed Let’s Do It Again went straight for glam rock gusto. Was there a conscious decision when writing the songs to drop some of the punk influence?
As Taxi, we played punk rock for years and I have to admit that while we were working on Racey Roller we wondered if our audience would have understood and appreciated the style changes, so probably unconsciously we did not have overplayed and denaturalized our old sound. The success that he had with Racey Roller has led us to be more daring, so Let's Do It Again is a bit less tied to our old period, and is undoubtedly more “pop”.

Both Let’s Do It Again and Racey Roller have soccer themed songs, “Get That Goal” and “Number 10,” how excited is the band for the World Cup this summer?
Well, I have to say that I’ll watch the World Cup, but its not my favourite soccer competition. I prefer much more to watch the Serie A and the European Championships to follow the only team I really like which is AS Roma.

What is the punk scene like in Rome? Is there a bovver/glam/glitter scene in Italy?
Actually I don’t think that there is a glam rock scene in any part of the world.
However here in Italy there is another cool glam rock influenced band called Faz Waltz, we shared the stage some times, they are really good. About the punk rock scene or the underground scene in general, it was better about ten years ago, when the gigs were always pretty crowded and lots of international bands came to play here, anyway in Italy there is a good hardcore/punk rock tradition, so there are many bands that are still going on with that stuff. 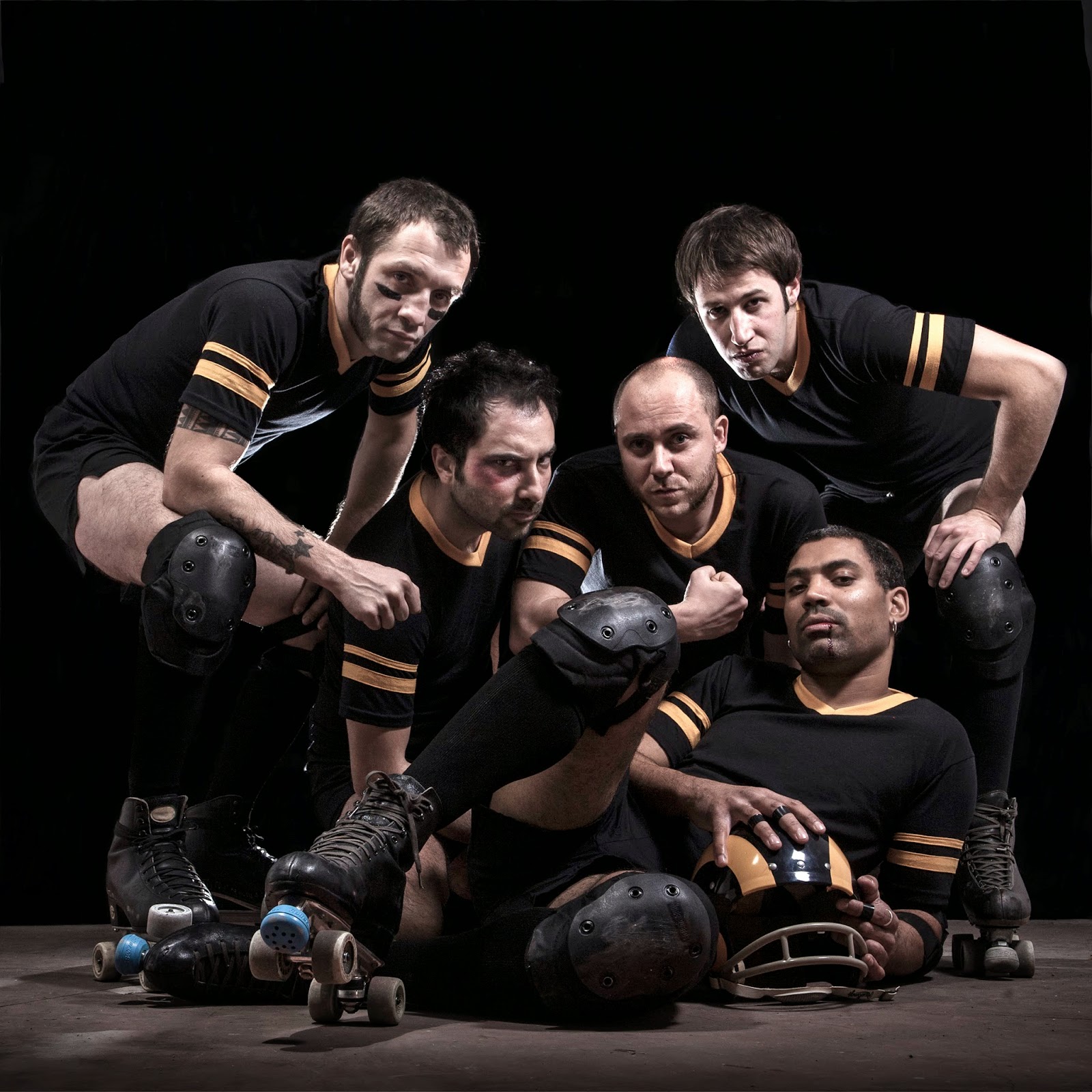 How was the US tour Giuda did last year? Any shows on the tour that was the band’s favorite or stood out in anyway?
The tour was very good, we played about ten gigs in the Midwest and the East Coast so we spent most of the time in the van and we didn't have many chance to hang around and visit the cities. Some of the gigs were great, I remember the first show in Chicago, the venue was sold out and the crowd loved the show: they were singing to all of our songs, it was amazing.

50 years ago people used to buy music and get their water for free, now people pay for water and get their music for free. How do you think this affects music in any way?
Well, we’re all in this. Less money for the bands, promoters, producers, labels, no more free records for the music journalists. We need to sell to live our lives but to release better albums too, to produce the album that we would like to produce we need the money, of course. This affects us directly.

I think the form we were used to imagine the music business when we use to buy records when we were kids practically disappeared in the last fifteen years. Now is slowly coming back because the people out there just realize that there is no future in selling digital only.

Classic Rock Magazine, listed Giuda a one of fifteen bands to watch for 2014. How do you feel about that?
Of course it’s a pleasure also because is not very common for an Italian band to get attention and good reviews from the international press. I have to say that we were a bit surprised to read articles and reviews on The Guardian, Mojo, NME, Q and other stuff like that. This kind of things gave us more credibility in Italy too.

The band’s popularity is on the rise. This summer Giuda is playing the FM4 Frequency Festival in Austria with Queens of The Stone Age, Blink 182 and other giant bands. How did this happen? What has been the bands reaction? What has the fans reaction?
It happens because things are growing, we got enthusiastic reviews from the international press and this has helped to broaden our audience. Of course we also have to thank our agent, Marco Ercolani, who does its job very well. Sincerely when we started to play I couldn’t imagine that we would share the stage with Placebo, Queens Of The Stone Age or Franz Ferdinand and played in giant stages. In such kind of festivals we’re always the “weird” band and it’s fun! I think that our fans are happy to see that things are going better and better and also to see that a Rock N’ Roll band as we are is getting all this attention.

I had read in a previous interview that you run the Proudfoot Sound blog. How has this influenced the band in anyway? Must be inspiring to find some old glam/bovver gem and post it.
Yes, I did Proudfoot Sound blog but in the last months I have a little neglected, because I have been a bit busy with the band. Of course a lot of the bands on the blog were part of our influences and inspiration.

What’s next for Giuda and where can people hear the band?
We will tour all Europe until this summer and then we will fly again to the United States. Come to visit. Keep an eye on our Facebook page for any Giuda’s next move.

Posted by Audio Ammunition at 8:19 PM