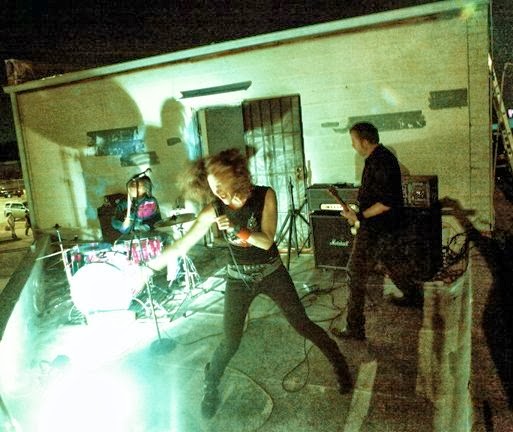 This is not your timid 20 something’s on stage staring at their sweat beads on the ground.   SVT bunch play earsplitting, express train punk Rock ‘N’ Roll the likes of which The Valley of the Sun has never seen before.  A singer that prowls around the stage in Blade Runner Replicant makeup programmed with Bon Scott venom and Joan Jett strut and a guitar player that was in one of the best garage punk bands of the mid 90’s, The Chinese Millionaires.  What more can a fanboy ask?   Grab on to something load bearing, I hear the air raid sirens, and the house is beginning to rumble.  Behold, the Scorpion vs. Tarantula Rock ‘N’ Roll hurricane is about to plug in.

Who is in Scorpion vs. Tarantula and what instrument do they play?
L. Hotshot, vocals. Tana Satana, bass, Michael “Cappy” Renfroe, drums.

I noticed you have had quite an assortment of drummers.  Do you think your busy schedule has something to do with this?  You seem to play quite a bit.
Drummers are the most difficult band members to find and they are the most difficult to retain. Ours have come and gone for numerous reasons, but we're happy with the one we've got right now. He's been with us since September 2012.

Band members seem to be from different places around the country, how did you end up in AZ?
L. and I moved here from Chicago in summer of 2005, and we originally are from Michigan, also the home state of Tana. L. and I had been in a band together during our Chicago years. It wasn't until summer of 2008 that we got the notion to get another project going.

What is the origin story of Scorpion vs. Tarantula?
L. and I put the band together in June 2008 with a drummer called Notah in his house in Glendale. We played our first shows that December. We recorded our first album in the summer 2009 with a friend of Michigan playing bass. Tana joined the band in November 2009. Notah split the band in May 2011 to pursue outside interests. For a while, we had five people. It's been the four of us since February 2012. We made our second album in March 2012. We just recorded our third record a few weeks ago.

Like I said before, you play around the Phoenix Metropolitan area quite a bit, have you taken the Scorpion vs. Tarantula show on the road much?
Two trips to California is all that we've done. But there will be more, if people will have us.

What are some of the earliest musical influences in your life, when first discovering music as a child that set you on a path to want to start/join a band?
I decided I wanted to play music in the early 1990’s after hearing the early singles and first LP by New Bomb Turks, the early LPs of the Devil Dogs, and the many, many records made by Billy Childish. L. is into much of the same kind of music as I am. Tana likes some of that stuff, in addition to bands like the Muffs, Distillers, and Urge Overkill. I don't know about the drummer. I barely talk to him. He does wear a Descendents T-shirt a lot.

With some of you guys being from the Midwest, I think it definitely shows in the songs,  they have that Motor City toughness to it.  A sound that is pretty indigenous to that part of the country.  Phoenix/Tempe seems to have a large horde of metal fans and the “punk” that is out there, seems to lean toward the hardcore variety.  Although it does seem to be getting better, has it been difficult for you guys to carve out your niche here?
I just really like music from Michigan and the Midwest, and I listened to it most of my  life. Just like people from here are real proud of the musicians that preceded them in Phoenix and Southern California.

As far as carving out a niche, I don't know that we have carved out anything. We've played a lot of shows, seen some good bands, and met some really nice people along the way. I'm not sure what else you can ask for at our level. 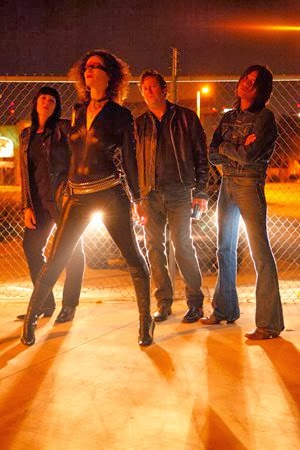 People used to buy music and get their water free; now people pay for water and get their music free. How do you think this affects the industry and especially musicians?
I haven't figured out, and probably never will figure out, the best way to apapt to the changes in the music industry. I was in a band in the late 90’s that was lucky enough to have three different national and international labels want to put out various singles and an LP. The LP sold over 3,000 copies, and I even received a royalty check. Three-thousand doesn't sound like a lot, but the idea of selling 3,000 copies now is inconceivable. In a lot of ways, it was all luck and we happened to meet the right people and have them say nice things about us. I don't know how to capture lightning in a bottle again, unfortunately.

As far as getting music for free, that's the way it has evolved, probably to a point of no return. Our music is on Spotify, which for a band at our level, is an excellent service. On one hand, it's frustrating to see that we're getting paid fractions of pennies for the work we've done. On the other, I'm thrilled that a surprising number of human beings are listening to the music I helped create. It's surprisingly given that we have no label, no publicist, no radio exposure. All we have is a Facebook presence and maybe some local word of mouth.

I have followed Scorpion vs. Tarantula on Facebook for a while.  Whoever does the posting seems to have a formidable knowledge and love of pop culture.  What, aside from music, influences you?
Thanks for following us on Facebook. L., the singer, does the majority of the posting because she's really good at it. She has a great sense of humor and a knack for finding good stuff on the Internet. It's the best way to keep in touch with people who may have an interest in the band and what we do. The people in this band generally like all the usual stuff every other white, middle-class, suburban-raised, 1970s and 80s kid grew up with. So let's just say the baseline for everything we do is Kiss and Welcome Back Kotter.

Where can people hear the band?
Spotify, Bandcamp, iTunes, our Facebook page, CD Baby, Amazon. You can buy physical copies at The Record Room, Revolver Records, and Stinkweeds. You can see us at Yucca Tap Room, Chopper John's, Palo Verde, Hollywood Alley, the Ice House Tavern, the Lost Leaf, and numerous other venues.

What’s next for the mighty SVT?
We just recorded our third album. It will be available in the fall. We probably will wind up writing a bunch of new songs and shoot for making a fourth record next summer. We will continue to perform as demand dictates. Hopefully, we will be able to make some out-of-town trips and perhaps even do a weeklong tour or something.