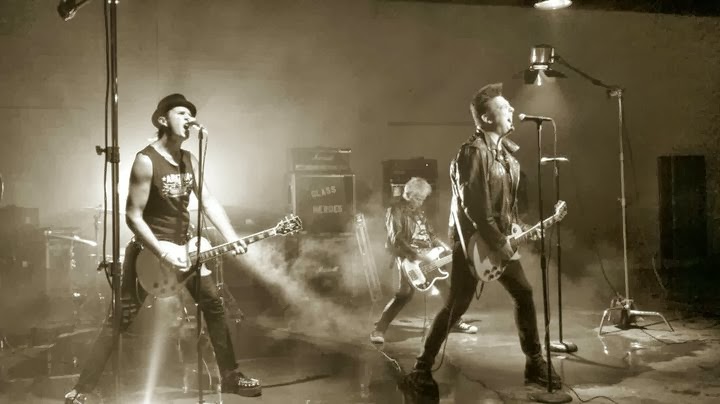 Keith Jackson has driven his band through many a storm.  There was the whole Gin Blossoms uproar, The Grunge years, the Pop Punk phase, the Indie Rock uprising and so on, you get the picture.  Through all of this the Glass Heroes have remained the Gibraltar Rock of punk in Phoenix, Arizona.  They have stayed on course through 22 years of proudly rocking tried and true, smashing through the little kiddies and their fleeting fashions like a Rock ‘N’ Roll Juggernaut.  Don’t let the “Glass” in their name fool you folks, these heroes are constructed of concrete, stone and gravel.

Please introduce yourself (or selves) and how you contribute to the Glass Heroes pogo machine?
This is Keith Jackson of the Glass Heroes! Nice ta meet ya. I’m the vocalist/guitarist for the band.
Ad Adams=Drummer
Steve Shelton= Guitar
Stevie Davis= Bass

Where are you all from originally?
We are all transplanted mid westerners...lol. I’m personally from Detroit. I moved to Phoenix in 1991.

What is the Glass Heroes origin story?  How did you meet and start playing music together?
I first came out to Phoenix in the winter of 1991. I really didn’t plan on staying. I was doing some work in Los Angeles, and touring in Europe with Shock Therapy (Industrial music… pioneering band out of Detroit) I had just returned from Europe and was spending some time with my folks out here. I was out on the town checking out local bands when I ran into Steve Davis. He was playing with a band called Hell Fire at the time. He looked cool. As in Leather jacket, jet black Johnny Thunders hair, and he was outside the club smoking. I walked up and said, “You’re the first ‘real’ punk I’ve seen out here.” I asked him if he wanted to start a band, and within a week, we had 10 songs completed. Shortly there after, I met Steve Shelton at the now infamous Sun Club. Same situation, he looked right and was a good guitar player. The Glass Heroes were formed that quick. It’s now been 22 years! I named the band “GLASS HEROES” because at that time many of my childhood heroes were dying. Thus all of our heroes can be shattered. Glass Heroes; I liked it.

The new album Liars, Cheats and Thieves was produced by Rat Scabies (drummer for UK punk legends The Damned for you sheltered folk).  How did he get involved in the project?
I called him in England...and told him I wanted him to produce the new CD. Rat was and is a great songwriter. He was instrumental in the early Damned recordings, and we loved much of the early stuff they did. I knew he had the talent and the ears to do something good with the band, and still keep our sound trite and true. I sent him a plane ticket, and he ended up staying with me for over 7 months! The lodger.

How did you get involved with Fervor Records?  They seem to have a pretty diverse group of artists on their roster and have an involvement in different types of media.
Fervor has been fantastic!! I’ve worked with many labels and they are amazingly communicative and open to many of the artists ideas. They have been instrumental in the band moving into a new and amazing realm of TV/Movie soundtrack work.
Jeff  Fruendlich approached me on working with the Heroes, and we hit it off immediately. Great label and there’s not many left!

In an interview with Phoenix New Times you mentioned that one of your motivations to finish the new album was that some production companies wanted to use some of your music.  You didn’t record your first full length album until The Glass Heroes was 13 years strong.  Is recording music a low priority as compared to touring or playing out?  Has it been challenging for you guys to get together to record?
I think the longevity of the Glass Heroes is due in fact that each one of the members does their own thing outside of the band. We don’t and never have put a lot of pressure on ourselves. We started this thing to enjoy playing unadulterated “Punk Rock ‘N’ Roll”. And we’ve kept doing just that; playing when we feel like it, and writing/recording when we feel like it. We could crank our 10 full lengths if need be, but we hand pick what we want to record and there’s 100’s of songs that have been lost and forgotten in the process. Seriously, it was just gone! We have music placed in some great films: “Dead in 5 Heartbeats” (Sonny Barger co founder of the Hells Angels & Director Jeff Santo’s new film) “Ridiculousness” on MTV and others. It’s rewarding and a gas being asked to do music for film and TV. We enjoy it immensely.

The Glass Heroes recently released a pretty slick looking video for the song “Let Me Down”.  The end result looked like it would have been fun to make.  Do you enjoy the experience of making videos?
At first we were reluctant to do videos, feeling that it might be to trite to do what everyone expects you to do as a band. But, we fucking loved doing it. We actually did one of our own for the RUTS cover “Backbiter” and it showcases exactly what we are, so when asked to do the new one “Let Me Down” We really wanted the same control over the content. Matty at Sundawg did a great job on it. We will be shooting a video for each song on the album. We actually are shooting a concept video the first week of August for two more tunes on “Liars, Cheats n Thieves”

The Glass Heroes have been playing around the Phoenix area as long as I can remember, playing the same kind of music since its conception 22 years ago.  Was it tough playing your music in a place that wasn’t too hospitable to punk back in the early days.
Funny you should ask that, I was just discussing this same question with some old school valley musicians. Of course there was a long standing Hardcore scene here back in the day. By the time I stepped off the plane from Detroit here in 91, it was culture shock for me. I hated LA and all the poseur posturing that’s still part of its music scene or lack of a real one. And Phoenix had fizzled out as well. Coming from Detroit, where the local music scene has always been strong; to a very small clique of certain people was weird. I spent alot of drinking time at Long Wongs on Mill Avenue and the Sun Club. I became friends with the Gin Blossoms guys and a slew of other local musicians. More as drinking buddies, than cohorts in music. Great guys, but I didn’t really dig the jingle jangle thing going on. The Glass Heroes began playing and I began booking friends bands from the UK and back east. I had the Business here, GBH, UK Subs, Vice Squad and such. We enjoyed opening for most of the bands and did so for a long time. It was strange, but in a few years. The Nile Theater opened up, The Green Room, The Reptile Room, The Rogue Bar, and The Mason Jar started booking punk and like bands and phoenix became a bit more tolerable. And now it’s sliding back into the doldrums again. I’ve always said Phoenix has so many great musicians and bands but no solidarity. They either take their selves to seriously, and to think they are gonna be the next big rock star- it poisons attitudes and makes things weaker. We have outlasted them all. Who’s this years model? To stay at it and have longevity, it takes far more commitment than most “Look at Me” types have to go the long haul.

The band has shared a bill with so many great punk bands.  What has been the most memorable show you’ve played, good or bad?  Where was it and what made it so unforgettable?
I suppose playing with the Sex Pistols at the Marquee Theater in early 2000. It was just us and the Pistols. They loved it and so did we. Steve Jones said it was one of the funnest shows they played. Thrown together fast- inside and packed! Their touring sound crew were actually friends of mine from Detroit!  We sounded great and John Lydon said it was refreshing not to have to hear anymore Rev. Horton Heat, who had been opening for them. “Nice to hear some REAL music for a change” That was funny. But, it was coming full circle for us. It was surreal.

What music have you unleashed on the world and where can people go to hear it or buy it?
The new CD is available through Fervor Records and iTunes. Check out our Facebook, and say hello.

What does the band have in store for us in the near, or not so near, future?
We are going to record some of the “lost” songs I mentioned earlier and crank out some more videos. More sound track work and a possible tour in the fall..back east.

Sell music on Amazon at ReverbNation.com

Posted by Audio Ammunition at 8:33 PM