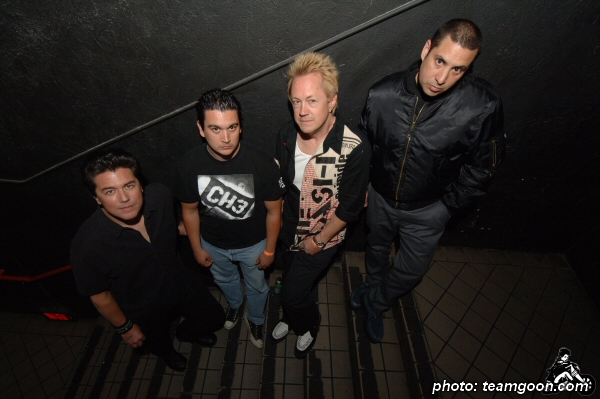 What is there really to write about Channel 3 that hasn’t already been written? Classic Southern California punk band, check. Wrote classic punk song, You Make Me Feel Cheap, check. Released two classic LP’s Fear of Life and After The Light Go Out, check. Had those classic LP’s released on one of the most famous punk labels ever, Posh Boy, check. This would be the beginning and end to a band career that most punk bands would dream of, but the story doesn’t end here for Channel 3. After the band went on hiatus in the 90’s, Channel 3 had a return to form with the CH3 release a few years back. Now with the recently released Land Of The Free on Hostage Records, the band’s classic combination of melody, punchy guitars, and catchy choruses are back at the forefront.

Where is the band from?
Famously and originally from Cerritos, CA. Though now we are all based in OC/Long Beach area.

Who is in the band and what instrument do they play?
I sing and play guitar, Kimm Gardener on Guitar, Alf Silva on Drums and Ant Thompson on Bass.

Can you give a brief history of the band up to this point?
We started playing in 1980, recorded the first EP on Posh Boy in 1982, started touring then, and after going through a ton of different record labels, band members and hairstyles, we arrive in 2013.  Still recording, still touring, so not much has changed!

Describe the lasting power of Channel 3?
Mainly, our lasting power comes from never breaking up!  Seriously, we just outlasted a lot of other bands (and a lot of the fans) out there, and they just have to accept you'll be around at some point, yeah?  It is difficult at times, to maintain the band when we've come to this level--not the headliner at the festival, not the youngest band on the bill or the hardest touring band on the road.  But people do have to respect that you survive, and there has to be some sort of commitment and passion to the thing if you can still do it!

How important was Robbie Fields to the band? He produced the classic LP’s Fear of Life and After The Lights Go Out as well as the Mannequin/Manzanar single.
We give Robbie so much credit for getting us into the studio and guiding our career in the early days.  I think he saw a potential in the band we really didn’t see ourselves.  We basically made a demo tape in a garage, he heard it through a friend of a friend, and we were recording the first EP in a couple weeks--and this was before we'd even played our first gig!  We may have made it to the clubs and records eventually on our own, but then again we might still be in the garage and backyards if Robbie didn't make the call...

As I was reading through interviews, it just seems like overall the band has a really positive attitude even when talking about period of the band’s history that might not be flattering. How does the band keep this attitude?
I assume we are talking about big hair and cowboy boots?  hah! Well, I think compared to some other bands that don’t really like to talk about embarrassing periods in their careers, we don’t have regrets of that time.  Sure, the photos look silly out of context, but we weren't really doing anything that was insincere.  The packaging and image was poofy, to be sure--and that was indeed involved in trying to break out of the punk mold--but we stand by those songs.  And when we play them live now, without the classic 80's production, the shotgun snare drums and soaked vocals, they just sound like CH3 songs, ya know?

After listening to Whom It May Concern: The 1981 Demos, I found it interesting that I Wanna Know Why was written and ready to record, but didn’t make it on any release until Airborne. Was there any reason it wasn’t included on either Fear of Life or After The Lights Go Out*?
Whoops, got ya there mate--it was indeed of on Fear of Life.  It was written but not recorded for the first EP.  It was probably the second song we ever wrote, and Robbie in his wisdom held us back from releasing it on the first EP, as it would've certainly softened the hardcore introduction to the band.  We just re recorded it -unnecessarily-when we got on Enigma to hold a bridge to the past, I think.

In the early 2000’s, the band releases the CH3 LP, which is a return to form. After starting as a punk band then venturing more of a pop-rock sound especially on the Airborne EP and Enigma years of Last Time I Drank, why the desire to go back to punk?

It was really just how the album naturally came out.  I hadn’t written songs in a good decade, so when you pick up the guitar in your room once again, you go to what comes naturally.  I'd be lying to say we weren’t aware of the great old school punk rock renaissance of 2000, but we did what felt natural, ya know?  It was at this time we started to produce ourselves for the first times, me and Kimm, and it's what we learned from Posh and Jay Lansford and Ron Goudie, all those philosophies combined .

*(interview note: On the Cherry Red released version, which I own I Wanna Know Why and Stupid Girl are omitted.)

In a Razorcake interview, Mike had stated the band got back together by “playing every Christmas at Linda's Doll Hut. We played for free so nobody could accuse us of "selling out." The next thing we knew, there was a benefit with TSOL. Then The Misfits called and they wanted to do a show with us in Vegas. The Angry Samoans called. There were all these great shows being offered to us and we did not want to keep going out there unless we had some new material.” What was decision to have new material and why did the band feel it was important? Nowadays bands are touring just playing LP’s in their entirety. Buzzcocks did it and so has Devo.
Hell, the people that show up would indeed be happier if we just stuck to the Posh Boy catalogue in our live sets, so I can understand why bands honor those classic albums.  But in So Ca especially, we have this unique biosphere where all the bands are still playing, everyone looks great, and the bands that are really into it are still creating.  I know that there are audible groans when you announce this next one’s off our latest album, but if you can’t still create you can just become a cover band of your former selves, ya know?  And even if you don’t even play the new songs in your crusty set list (guilty!) a band thrive and grows on that creative process.

How did you connect with Hostage Records?
Speaking of new songs!!  We'd met Rick Bain many years ago through his photography, and were always aware of the quality releases from Hostage.  We happened to run into Paul at Record Store Day 2012 and we started chatting about a possible release.  Well, turns out we'd accumulated almost an album's worth of material in the last few years, so they released the Land of the Free single with the 8 song download card.  It was a real treat to release songs in a new format and to see how that goes.  We've really come full circle now!

Has the band view about music changed at all or does the band feel the same way about music in the same way as when starting out? In the Razorcake interview, Mike stated “We have no illusions about becoming rock stars anymore.” What other views might have changed?
Well, I guess at 50 now we can reconfirm we aren’t holding our breaths for the major label contract, eh?  But then again, what does a major label deal even mean any more?  The classic music industry is in such a fucked up state nowadays, which I think thrills most punk bands and labels.  It's like the world had to catch up to the DIY recording and promoting that the punkers had to embrace for the start, yeah?  So if anything, we are more reassured than ever that we are in the right place, making music that matters to us and our small but loyal group of chums, and get out there and play it worldwide on a shoestring budget.

50 years ago people used to buy music and get their water for free, now people pay for water and get their music for free. I know as part of the Land of The Free 7 inch there is a download card with extra songs. In a way the band is doing both. How do you think this affects music in any way?
It is a shame that people have no qualms about buying goddamn five dollar coffee and then scouring the internet for illegal downloads!  But, I don’t really blame people as thieves, it's just that for better or worse the internet has become such a wild west of content, and the way music became available was really one of its revolutionary components.  A child of the 60's. I saw 8 tracks (hell, 4 tracks) to cassettes, CD’s to downloads, so it's been a wild ride.  One downside is the instant gratification aspect, where kids find the top 3 songs of the artist and just download those, no more sifting through cool b sides, no more rolling joints on the 12" sleeves and pondering the lyrics on the liners.  And what of the art of song sequencing, deciding which song is second track side 2?  So for the very convenience we paid a price and I guess that's what the vinyl rebirth is all about.

Mike and Kimm are both parents. How do your kids view the band or your kids’ friends?
The kids are all getting pretty old themselves now, so they seem to view the band with a bemused smile, Dad's softball team is going on the road again this weekend, ya know?  It is hilarious when they come home and tell us about seeing strange kids at the mall, flying CH3 patches, as if that is finally validation of the band in their eyes, not the goddamn albums lining the hallway or the 6 dozen tour t -hirts in the back of their closets.  You know kids--Dad's always a dork.

Does Kimm still have the CH3 stencil guitar?
Don’t we wish!  Our great pals used to work at the famed Charvel factory out in Sam Dimas, and we used to drop buy and get handfuls of San Dimas Charvels for a tour, then we’d destroy them or trade them for amps or something. Those things would be worth a fortune today!  They will probably start turning up on Ebay once Kimm or I die or go nuts or get elected to Senate...

What’s next for Channel 3?
We’re gearing up now for an August European tour.  We're looking forward to meeting a lot of old chums out there and playing some cool festivals.  Lots of fatty snacks and cold beers, business as usual!  Cheers, MM

Posted by Audio Ammunition at 5:00 PM