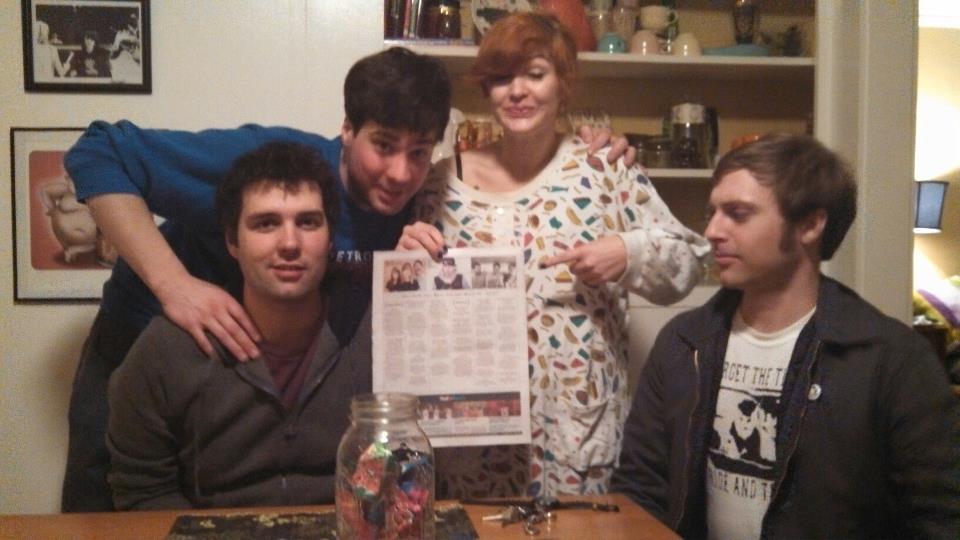 To try and place one label on Legendary Wings sound would not do it justice.  For one, it’s an album that could have only been conceived by youthful vitality.  Oh sure all the good elements are there; a touch of the ol’ lo-fi rock n roll and power pop.  However it also has an element of charismatic Lookout Records punk pop that the label put out in the early to mid 90’s in its heyday.  Whatever it may sound like is irrelevant, its rock n roll with magnetism and hooks so contagious it’ll wrap itself around your head like an Alien Face Hugger.  But unlike an Alien Face Hugger, you don’t really want to tear it off.  Hicks, Vazquez……..stand down!

Who is in Legendary Wings and what’s your contribution?
I play drums, Scott plays guitar and sings, and Matt Wing plays bass.

Are you all originally from the Kalamazoo MI area?
Yeah.

What is the bands origin story?
Me and Scott were all, “god damn there’s a lot of shitty bands in Kalamazoo!”
And then we were all like, “we should make a shitty band!!”

What influences did you have in mind when starting Legendary Wings?
RATT

You’ve listed Booze, Nintendo Wii, and Records as some of your interests.  Have you ever combined all three activities?  If so, how many records were ruined?
We combine the three before every band practice...and the only thing that got ruined was my right shoulder during a heated Wii bowling match. It popped out of its socket and I almost died.

If you guys could tour with any band/musician from past or present; who would that be?
Ratt.

I recently read that out of all different art forms, music has the power to alter a person’s disposition the fastest.  Do you agree with this?  Do you have any favorite songs that you can put on that will always lift you from a slouch?
“Invasion of your Privacy “by Ratt makes me want to live.    ….so does any song by the free credit report.com band. They slay.
Is there any story behind the name for the LP “Making Paper Roses”?  It sounds rather poetic and profound.
It is totally poetic and profound and deep and would take hours to explain.

Do you think Rock N Roll can still be an influential force for kids in this disposable age we live in today?
Nah.

The LP “Making Paper Roses” is on Dirtnap Records, how did that relationship begin?
We sent Ken (Dirtnap guy) a demo a couple years ago…and he said he liked it….then we didn’t hear from him for a while…then he hit us up and asked if we wanted to do a record and we said “yeah, that’d be great man.” We couldn’t be happier with how the record came out!! Ken hooked it up. HELL of a label.
You guys are on tour supporting the new album now.  What has been the most memorable Legendary Wings show the band has played?  Where was it and what made it so unforgettable?
We played in New Orleans with Buck Biloxi and the Fucks. We put a bunch of stickers on the back of Buck Biloxi when he wasn’t looking. He didn’t notice because he was high on poppers. Then we peed on his leg and had a good laugh about it. That last part might be a lie.

What music have you unleashed on the world and where can people hear it or buy it?
New single on PELICAN POW WOW records outta New Orleans!! Split with Buck Biloxi and the Fucks!! Might be sold out but I think Goner Records still has some. We also have our full length floating around record stores and websites. You can buy it from dirtnaprecs.com

What does the band have in store for us in the near future?
Workin’ on a new album this summer!!! Prolly play a few shows too…hit us up!

Posted by Audio Ammunition at 11:46 AM