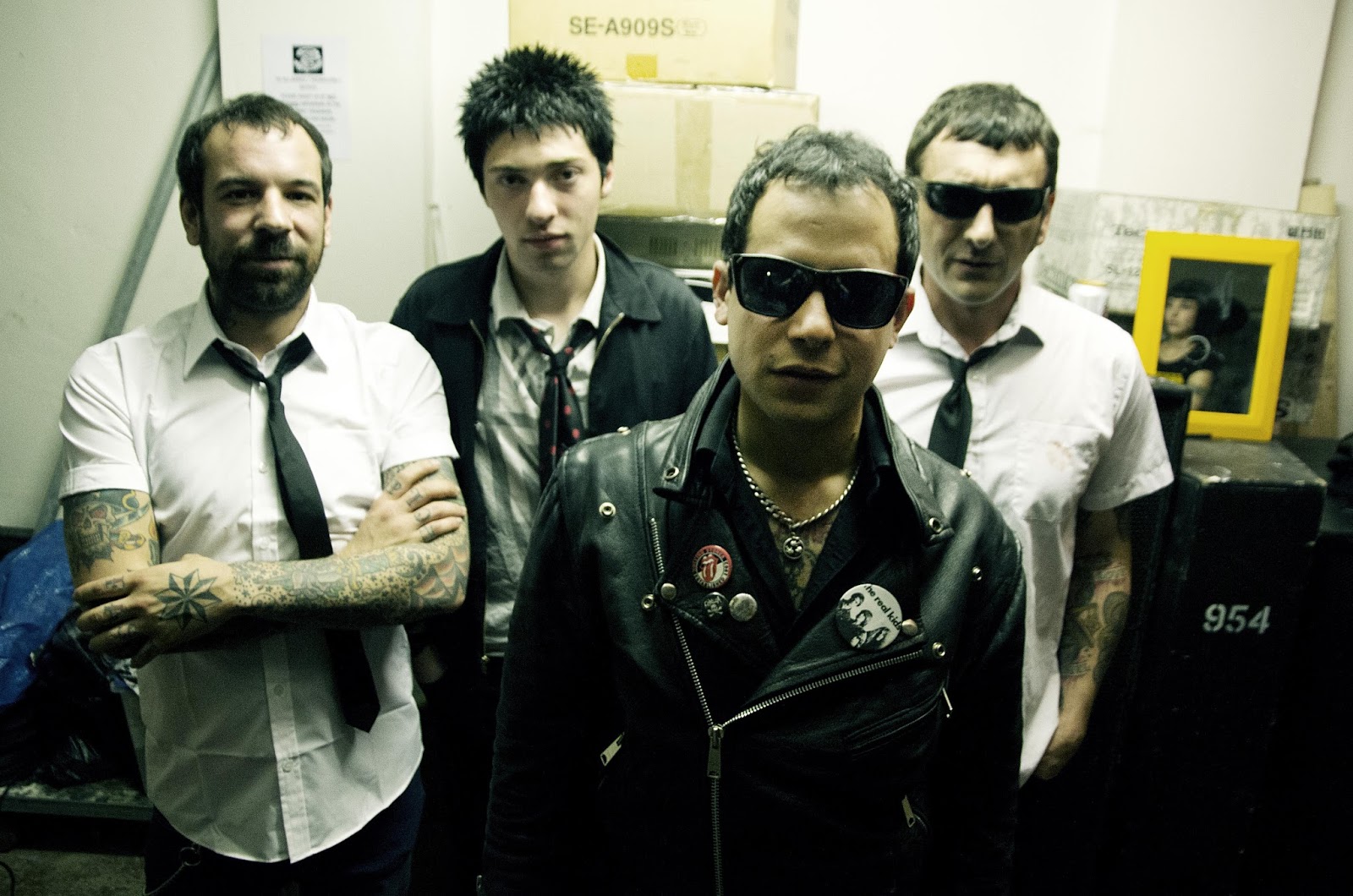 Anyone who thinks good rock n roll is defined by how fast some pompous ass can fondle a fret board or how high some overpaid wanker can vocally hit some hideous high note is sorely mistaken.  Good Rock ‘N’ Roll has always been about heart and gusto, in fact any good art is for that matter.  Judging by what is passing as rock n roll in the main stream now days, it’s easy to lose optimism.  However, any person that thinks this torch has been smothered out long ago isn’t looking in the right places.  There are still bands breathing the truth and vigor of the forefathers.  Take for example The Ricky C Quartet.  They have taken queues from some of the greats and serve it to you lean and mean.  They are now in possession of the aforementioned torch, and they’re burning it like a supernova.

Who is in the band and what instruments do you play?
Ricky C/ vocals, Joe the Dog-guitar/ b vocals, Jimmy Jones-drums/ b vocals and Sam Hall-bass/b vocals

Are all of you originally from London?
RC-Jimmy Jones and Sam Hall are from Essex, Joseber is from Spain and I am from Brazil.

You guys are all from different bands (The Blowouts, The Ten O Sevens, Johnny Throttle) Did the Ricky C Quartet begin as a side project for you guys?
RC: It began as a “proper” band, we never considered the Quartet as a side project. Now none of our previous bands exist anymore but The Quartet has survived…

JTD: Me and Ricky C used to play in Johnny Throttle. Ricky C was a crap drummer but he was very good at writing love songs and singing them, so he used to come to my place and record love songs on a 4-track cassette recorder. Then we just put the band together with some friends and now it’s our main band as Johnny Throttle split up, as well as the Blowouts.

JJ: At first for me, yes. Now its proper full on!!

Slaughter & The Dogs and Radio Birdman as musical influences for you.  What elements, if any, do you think early Aussie Punk had that some of the British bands lacked?  What about vice versa?
RC: I personally think that the fusion of Rock ‘N’ Roll with the rawness of punk was what the Australian bands had at their best; keyboards, harmonicas, tambourines, acoustic guitars and a big influence of Stooges and MC5! I can’t think of any element the Aussies lacked, honestly. On the other hand the British have always been the greatest inventors of Rock ‘N’ Roll styles. The Saints and Radio Birdman were influenced by The Rolling Stones and I think that shows how important the British are for Rock ‘N’ Roll in general.

JTD: Aussie punk was less fashionable, more primitive; it wasn’t absorbed by the mainstream as English punk was. When the Saints first came to England in 1977 the punk kids didn’t like them because they didn’t dress like “punks”, but they had more attitude and kicked ass more than many bands here. On the other side, being backed by the majors as many English bands were, allowed them to record more and also tour more and in better conditions which I think is a good thing cause now we got all those wonderful records.

JJ: Can’t explain that one, both have their different sounds, both great.

The Ricky C Quartet has only been around for a couple of years and you are already getting such great praise from a lot of people.  Do you feel any pressure to continue to live up to the honors?
RC: It’s obviously great to see your music being appreciated but greater than that is seeing the people who believed in the band since stage one showing support. I don’t particularly feel any pressures, as long as we continue to play with our hearts and we continue to play with fun; everything flows naturally.

JTD: I haven’t noticed getting such great praise, to be honest. The record is getting good reviews but we still haven’t been approached by anyone offering us thousands of pounds. We just like to play our stuff and have fun, if people like it then that’s great, but there is no pressure so far.

JJ: Don’t feel like we’ve got anything to live up to, but it’s great when people love what we’re doing.

Do you find it important for any musician, no matter what kind of music they’re playing, to remember their musical roots, if so, why?
RC: Without a shadow of a doubt. I started to listen to punk rock when I was 14. Throughout the years, I found out other musical genres and other forms of Rock ‘N’ Roll.  Then I realized that the punk rock bands I liked were influenced by other Rock ‘N’ Roll genres. I think your musical roots represent part of your history as an individual, and it represents your teenage years and you should never forget what you were unless you used to like Boy George (LOL).

JJ: If you feel like you should, don’t think it’s important.

I recently read that out of all different art forms, music has the power to alter a person’s disposition the fastest.  Do you agree with this?  Do you have any favorite music that you can put on that will always lift you from a slump?
RC: Oh yes… I think music can definitely give you an injection of energy when you are down. I don’t have a specific favourite music but I have couple of songs that help me to feel good when bad times come; Southern Girls (by Cheap Trick), More Fun (by Radio Birdman), Shake Some Action (by Flaming Groovies), I Can’t Pretend (by Barracudas) to name a few. Oh… I’m a big fan of Onyx (hip hop) their mad energy is contagious…

JTD: I agree and your neighbor will agree too if you play music too loud in the middle of the night. His disposition is very likely to get altered fast. I like listening to calypso and rocksteady to cheer up. It makes me feel like I’m in the Caribbean and that’s a cool feeling.

Keith Richards said that people who are buying MP3’s and not records are being short changed.  Do you agree with this?  If so why or why not?
I have records but I also download for free.
JTD: People were much more short-changed when buying CD’s instead of vinyls for double the price a few years ago. That was the greatest rip-off in music history and it’s time for the industry to pay back. At least Mp3s you can download them for free. I support piracy, by the way, it’s a good way to know if a record is good before buying it at a gig, hence helping the band and not some big corporation. Mr. Richards didn’t complain about CD’s, did he? He was probably making good dough out of them back then.

RCQ: Joe the Dog has said everything…

What has been the most memorable show The Ricky C Quartet has played, good or bad?  Where was it and what made it so unforgettable?
RC: Montpellier in France was great. We were all very drunk and we were one of the latest bands to play in an open air festival. The area was packed. Ironically we were extremely tight and people went mental. That was the bollocks.

JTD: We went on a mini tour to Portugal, with the Ten-o-Sevens, a couple of years ago, in October. Summer in London had been crap and it was still sunny and warm there. We went swimming every day and it was a great holiday. The gigs were also good. Thanks Victor!

JJ: We played this open air festival in Montpellier last year, hair blowing in the wind, the lot!

If a year from now you were celebrating the best year the band has ever had, what would you be celebrating?
RC: A world tour.

JTD: Probably that someone from a major had come and given us thousands of pounds to live and make records without having to worry about work. We would also like to go and tour America and Australia.

What music have you unleashed on the world and where can people hear it or buy it?
RC-The Ricky C Quartet- demo CD
Small species-7”ep (available on No-Front-Teeth Records)
The Ricky C Quartet-LP (available on www.therickycquartet.com and Wanda Records)
And in few weeks our new single 7” Sweet Revenge will be out on our website and on Wanda Records.
People can buy our music on ITunes and Amazon too.

What does the band have in store for us in the near future or not so near future?
JTD: We got a very good 7” coming on Wanda Records, and a bunch of songs for our second LP which we expect to record before the end of the year.

Posted by Audio Ammunition at 12:13 PM