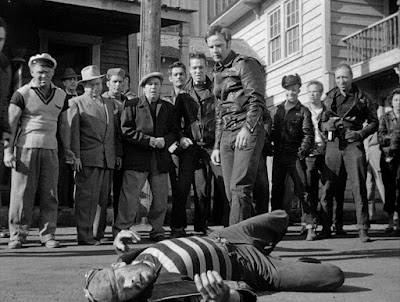 The Dahlmanns – American Heartbeat LP (Beluga/Ghost Highway)
This is my first time hearing The Dahlmanns, I’ve heard the band’s name around before of course but this is my first exposure to them. All I keep thinking as I’m sitting here listening to this record is why haven’t I gotten off my lazy ass and checked out this band before! This is the band’s 2nd LP but they’ve released a bunch of EP’s since their debut in 2010.  If you don’t fall in love with these songs just from Line Dahlmann’s vocals alone, then you have no soul! It also helps that the tunes here are so super catchy and well written, they have a timeless feel to them. What a marvelous LP, I’m going on the hunt for more Dahlmanns records! – J Castro 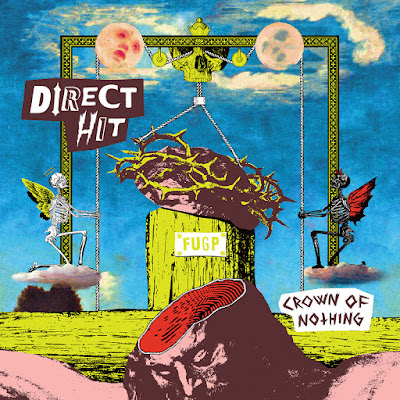 Direct Hit! – Crown of Nothing LP (Fat Wreck Chords)
This is the band’s 5th LP and they continue to tweak their sound slightly, keeping it similar yet not letting it become stagnant. Out of all the current “Fat” bands with the classic “Fat” sound, Direct Hit are my favorites. Their 2013 LP Brainless God is an absolute masterpiece in pop punk lore and Crown of Nothing doesn’t fall too far from it. Direct Hit’s kind of remind me of Propagandhi if Propagandhi were actually good. They cram loud guitars coupled with strong yet snotty vocals, laid over catchy as measles in an unvaccinated kindergarten class room melodies. Great record to add to an untarnished discography.  – J Castro 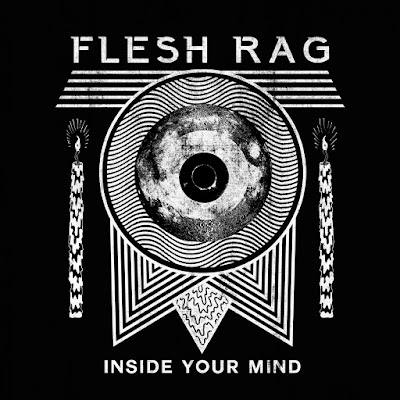 Flesh Rag – Inside Your Mind LP (Schizophonic/Loose Lips)
It’s about that time for the mighty Flesh Rag to reawaken from their slumber deep within the mountains of the north, swinging their mighty battle axe reminding us how puny and weak we all really are. This is the band’s second LP, continuing their unique brand of tough, macabre psych that sounds like the Pink Fairies cut with the MC5 or imagine The Stooges writing music on a bad acid trip at a morgue. Flesh Rag sounds tight and mighty as ever on this album, the songs fly by you like a hurled hatched narrowly missing your head.  Remember, if not handled properly Flesh Rag records can cause permanent damage. – J Castro 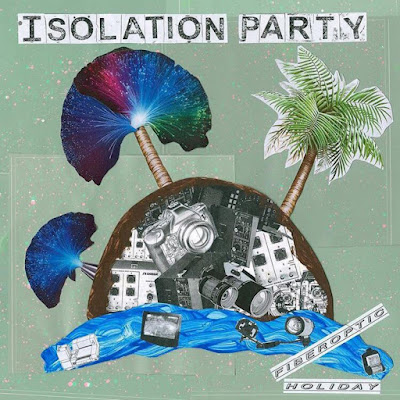 Isolation Party – Fiberoptic Holiday LP (No Front Teeth)
This London Ontario band’s debut LP comes in like a comet from the north, leaving a fiery trail of destruction in its wake.  Isolation Party takes angular post punk guitars and wraps them around power pop melodies to create one of the year’s most exciting LP’s! If you’ve ever said to yourself:  “Swell Maps would be so great if they weren’t SO weird” or “I’d like more power pop bands if they weren’t so sappy,” then Isolation Party are the band for you.  Their song “Mr. Telephone” is an instant classic and once listened to, will hug your brain for days. If you dig early XTC, Pere Ubu, or Magazine then you’ll instantly want to raise a glass to these guys. – J Castro 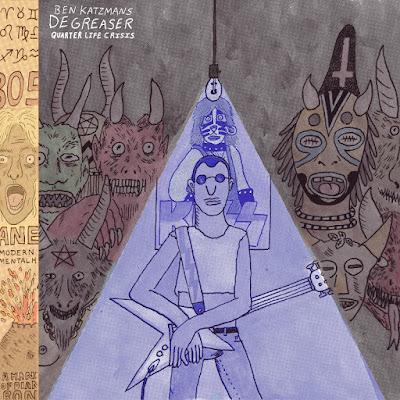 Ben Katzman’s De-Greaser – Quarter Life Crisis LP (BUFU)
These guys come from Miami Beach, FL and play a paint peeling, face melting brand of loud ass rock with punk rock ferocity. I mean, the first thing that hits you when listening to this record is the guitars, everyone else in the band seems to be running to catch up to them. This isn’t a bad thing at all. And those guitars aren’t just a hard open palmed slap to the face hit either. I mean they hit like wrecking ball to the chest.  Once you get the air back into your lungs you’ll be begging for it again! If you’re into bands like Turbonegro, Zeke, and Electric Frankenstein then I highly recommend these malcontents. – J Castro 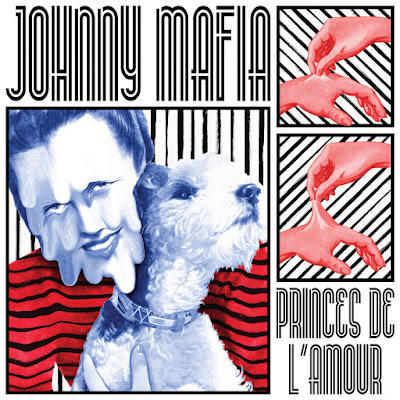 Johnny Mafia – Princes de L‘Amour LP (Dirty Water)
Johnny Mafia are a pretty cool band from Sens France, listening to this record is my first time hearing them. The band has been around since 2010 and this here is their second LP, the first on the Dirty Water label.  The band lists Jay Reatard and The Ramones as influences but the songs on this LP seem to me to fall more towards the Libertines, Cribs, Vaccines sound instead. Let me state that there is nothing wrong with that mind you, I like every one of those bands and I mean listing Johnny Mafia amongst them as a compliment. But if you’re looking for that manic, under produced, recorded in my mother’s garage sound, you won’t find it here.  – J Castro 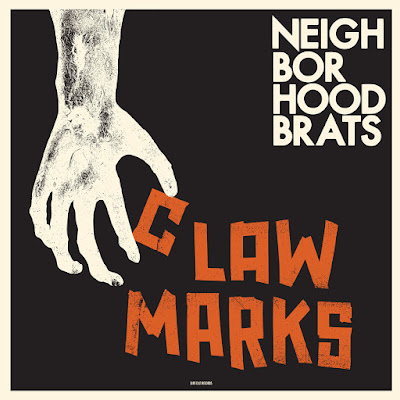 Neighborhood Brats – Claw Marks LP (Dirt Cult)
This band has been scorching the earth with releases since 2011 and in my opinion, after 2 LP’s and 6 EP’s hasn’t given us a clunker yet. If you’re not familiar with this band, this is as good a place to start as any. I love it when punk bands grab what’s great about different genres of punk, smash them all together and come up with something that sounds familiar yet totally unique. That’s exactly what Neighborhood Brads have done and continues to do so in brilliant fashion on this LP. If you get the chance, go see this band live while they’re touring in support of this LP right now, you won’t leave disappointed. – J Castro 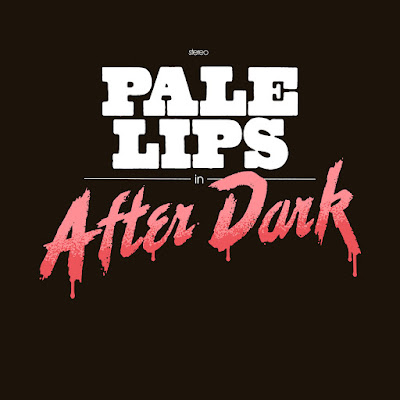 Pale Lips –After Dark LP (Spaghetty Town/Alien Snatch/Gods Candy/)
How can you not like this band? I mean seriously, if you claim to be a rock n roll fan you’ve got to dig Montreal’s Pale Lips. They play short, fun, catchy tunes that when played at high volume feels like someone opened the windows to your musty old soul and let in a cool breeze. They take the core fundamentals of classic rock n roll from the 50’s and 60’s and add their own unique, contemporary spin to it. So like the old adage goes, “what once was old is new again.” This is Pale Lips second LP, hopefully there will be many more to come. The universe needs more bands like this. – J Castro 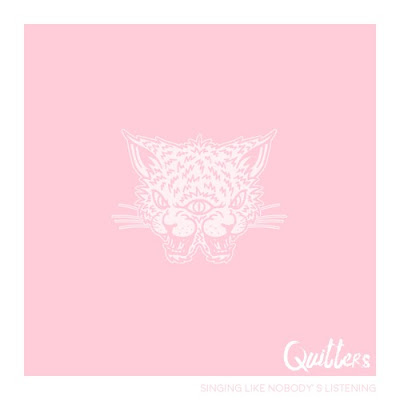 Quitters – Singing Like Nobody’s Listening 12” EP (Red Toad Music)
Quitters are from Montpelier, France and have been around since 2015. This is their 3rd release and already seem to have found a sure footing in their sound. This quartet plays loud, catchy songs that have an emo and indie rock touch to them. If you’re into bands like 00’s emo punk heroes like Get Up Kids, The Movielife and The Anniversary you’re going to go seriously nuts for Quitters.  This kind of music isn’t necessarily my first “go to” but even I can tell this band puts a lot into their craft and for that alone I can admire what they set out to do. – J Castro 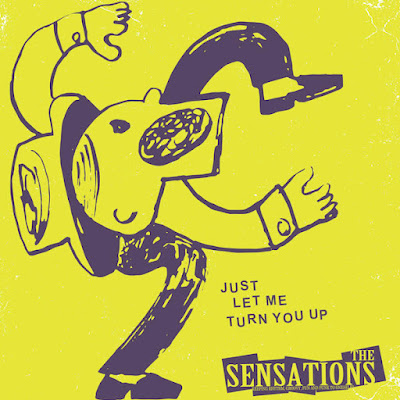 The Sensations – Just Let Me Turn You Up LP (Paper and Plastick)
Tokyo’s Sensations play wild, good time pop punk with Ska influence. Just from the opening song “Dig Your Own Grave” you can tell these guys are all about a good time like early Fishbone. That opening song pretty much sets the tone for the entire record. I know some cringe at the mention of “ska” but the hons are used sparingly on this record and I don’t get that cheese ball frat boy feel from these guys that I used to get from band like Mustard Plug or MU330. These guys have more in common with bands like Less Than Jake or a less scrappy Operation Ivy. The Sensations must be absolutely explosive live. – J Castro Territories - S/T LP (Pirate Press)
WOW, Territories are a really great band from Calgary, Alberta! I’m really digging this quite a bit. This record of starts off with really thick, melodic guitars and a rhythm section that sounds like distant thunder echoing in the mountains during the monsoon season. The vocalist has an earnest Springsteen style about him that makes listening to this record feel like putting on your favorite worn in denim jacket. All of the songs ooze this charismatic heartfelt sincerity you don’t get much in punk rock, not the real deal like this anyway. Territories goes well on the same shelf as groups like Iron Chic and Gaslight Anthem.  – J Castro 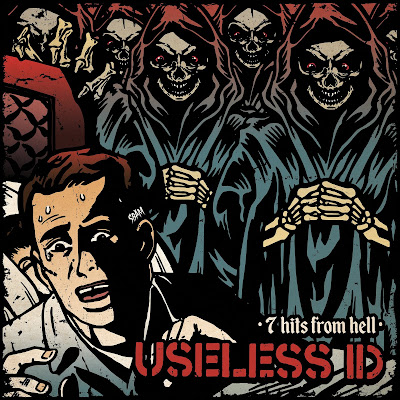 Useless ID – 7 Hits From Hell 7” (Fat Wreck Chords)
These guys have been around since the mid 1990’s and have released a crap ton of LP’s and EP’s on a myriad of different labels, probably outlasting most of them. The fact that this band has been around for as long as they have is to be commended for sure. From what I can tell, this is the band’s 11th EP and they released their 10th LP on Fat Wreck Chords in 2016. If you’ve never heard Useless I.D. before, let’s just say they’re right at home on Fat Wreck Chords. They play tight, fun loving, baggy shorts/backwards baseball cap, riding your skateboard down a steep hill style of punk rock.   – J Castro

Posted by Audio Ammunition at 8:05 AM