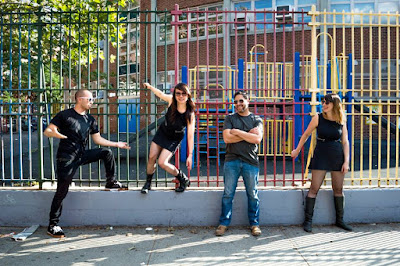 I first became familiar with New York City's Party Lights a few years ago when they simultaneously released records on the No Front Teeth label with their sister group The Recordettes. I loved both records and instantly wanted to interview both bands but I noticed both bands shared some members so I randomly just picked to interview The Recordettes.  Well, fast forward to 2015 and The Recordettes have now gone into hibernation and Party Lights are still going strong.  Their songs employ so many elements I love about rock n' roll.  This band manages to bottle up the bounce of 60's girl groups,  the energy of 70's punk, and the melodies of late 70's and early 80's power pop and new wave. That's why  I picked their debut LP I See The Light as one of my top records of 2015 and if you haven't heard it yet, you're doing your drab life a disservice.

Who is currently in the band and what does everyone do in it?
ANNA:  The band is Joan Chew on bass & vocals (and keys on our recordings), Dave Smilow on drums, and me (Anna Blumenthal) on guitar and vocals. Our other guitarist Elliott Klein absconded to LA earlier this year to become much more famous than us. He currently sends us weekly emails reminding us that New York is a city full of pizza-eating rats and that he wouldn’t move back to New York if Johnny Ramone himself rose from the grave and sent him an engraved invitation.

How did you all meet and decide to play music together?
ANNA: It was part of a plea bargain.

What band or musician first inspired you to want to pick up an instrument and learn to play and/or write music?
ANNA: Cheap Trick, The Knack, The New York Dolls, Big Star and The Runaways. But The Ramones were the band that made me realize that after learning just three chords I had all I needed to start writing songs (our bass player Joan knows like 945 chords and is going to punch me when she reads this).

How would you describe you band to your grandparents?
ANNA: By yelling really loudly.

What sorts of things do you typically enjoy writing songs about?
ANNA: When life is peachy keen, no songs get written. I’m not saying I like drama, but a nasty divorce is good for about 46 albums worth of songs.

I’ve heard people say that playing and writing music is therapeutic to them.  Have you ever found this to be true?
ANNA: 100% yes. Writing songs about weird things in your life is so therapeutic. It’s awesome to turn crappy situations into good songs. And then getting to crank your amp and sing and play them with your bandmates (who in my case are incredible musicians and equally awesome people) is the best thing ever.

Does it annoy you or distract you at all to see some of your audience members fondling their phones while you’re up on stage performing?
ANNA: I assume they are all texting their friends “HOLY CHRIST I’M WATCHING THE BEST BAND ON EARTH!!!!” so it’s all cool. That, or they’re sexting, which we also approve of.
After one of your shows, what sort of feeling or sentiment do you hope your audience walks away with?
ANNA: Our goal is for everyone to be in a slightly better mood than they were before our show.

What is your favorite album to listen to from start to finish?
ANNA: Way too many to list. I can tell you the last one I listened to all the way through though: Blondie’s Parallel Lines. Amazing album. 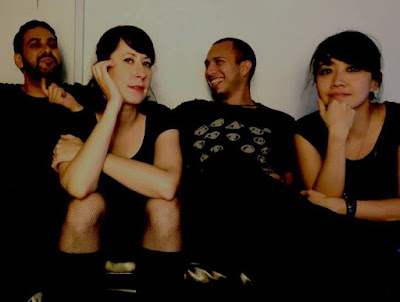 What’s the best advice anyone has ever given you that you still follow to this day?
ANNA: I’m left handed and I was told to learn to play guitar righty. Thank god.

What is the best way people can hear and get a hold of your music?
ANNA: www.partylights.bandcamp.com for our album – we’ll also have our brand new 7” (coming out in a few weeks on Hidden Volume Records) available at shows. And it’ll be available at www.hiddenvolume.com too.

What lies ahead for the band in 2016?
ANNA: More shows (next one is at The Gutter in Brooklyn), a new album later this year and our own brand of potato chips. Currently crowdsourcing for flavor ideas.

Posted by Audio Ammunition at 6:08 AM