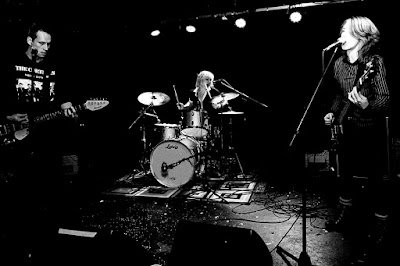 Line Traps forge brief, bitter, bare knuckled punk rock blasts deep within the lush green gardens of Victoria, British Columbia .  The band recently talked to us about their humble beginnings as a one man band, their meticulous song writing process, and why you shouldn't expect a Line Traps world tour anytime soon.

Introductions please!  Who’s all in the band and what does everyone do?
LINE TRAPS: T. Depression – Guitar/Vocals   P. Ethylene – Bass/Vocals   G. Debris - Drumbs

How did all of you meet and come together to form the band?
LINE TRAPS: T. was embarrassing himself playing with just a guitar and drum machine, ‘cause nobody else would play with him. It took him almost six years in a new city to find two people to play music with. He started jamming with the girls and asked them if they wanted to do a full band version of his drum machine project (New Krime) at a show he had booked in a couple weeks…that was it. Line Traps first show was with Big Eyes and Criminal Code, billed as New Krime.

When first starting out, did you have an idea of what you wanted Line Traps to sound like, or was it one of those things where the music kind of took its own direction once you started playing together?
LINE TRAPS: We mostly took existing songs and played them the only way we could… the sound has been changed by endless shows playing drunk and often angry… becoming increasingly faster. A lot of the songs started out really robotic, as they were choppy, stupidly simple cuts from the drum machine days…they’ve since evolved to just beyond stupidly simple and slightly less robotic. It’s hard to nail down what we wanted the band to sound like…it’s just a shit mix of all our favorite music…inept 60’s garbage, nasty basement punk, early 80’s hardcore, 90’s garage-punk, etc, etc…took all that crap in over the years and now we’re regurgitating it as a sloppy mess of shit-tone guitar, fuzz bass and robot beats.

The band is currently based in Victoria, BC.  Is there a supportive crowd/scene there that comes to your shows and understands what you’re doing musically?
LINE TRAPS: The music scene in Victoria is as underwhelming as ever. 20 somethings going nutz for 90’s pop punk and grunge revival…and whatever passes for post-punk these days. A few years ago, there were still a buncha scuzzy punk bands with names like Alcoholic White Trash, Lesbian Fist Magnet, Fuck You Pigs…and of course Dayglo Abortions. Bands singing about shit and dicks and fighting and hating cops. Lots of metal influenced punk bar bands playing to the lowest common denominator…and at the same time, an all ages scene that is very heavy on Grindcore and Crust stuff. It’s like everyone in Victoria missed everything that was good in music…ever. We play a lot of bills we have no place being on…and almost nobody in town gets it. Playing for people who don’t get what you’re doing can be a lot of fun though…just staring at a room full of confused faces.

You released your Self-Titled debut LP earlier this year.  Other than your demos, this is the first actual Line Traps record.  What led to the decision to do an LP first as opposed to a couple of singles first?
LINE TRAPS: Having morphed from a one-man freak show, we started out with more songs than we could handle. It only made sense to record everything we had and get it out there. A lot of those songs are really old. I think the intention was to record them, put ‘em out and eventually phase them out in favor of new material. Sadly…we seem to be incapable of writing new material, and we’re still playing that stuff. Plus…a one sided LP with handmade packaging costs about the same as a 7” to make...and you don’t have to flip it every two songs.

I was reading the review of your record in Terminal Boredom and they compared the band A LOT to Rip Off Records type stuff like Dirty Sweets and the Kill-A-Watts.  What do you think of the comparisons, was Rip-Off Records a big influence on Line Traps music?
LINE TRAPS: So far we’ve been compared to like 6 different Rip-Off bands over 3 different reviews. T. was picking up a lot of Rip-Off releases in the 90’s, but I don’t think we sound like any particular Rip-Off band…or even a combination of a couple…and I don’t think Rip-Off was any more of an influence on our sound than anything else. The one thing I always appreciated about that label is that even though not all the bands had a similar sound…they all had a similar FEEL. It seemed like none of those bands cared too much about how they looked, what gear they played, or how well practiced they were, I think we can relate to that. Oh yeah…our next LP is due out in 2016 on Rip-Off Records.

When people see your band live, what sort of feeling or sentiment do you want the audience to walk away with afterwards?
LINE TRAPS: I think we’d like people to walk away after 18 minutes of us playing with a smile on their face…but seeing as that is unlikely…agitation, anger or disgust would also be acceptable responses. We aren’t playing to crowds of our friends…and it actually takes effort for us to make it through a set without the whole thing falling apart. It’s nice when people we don’t know come up and say something…anything…about the band.

Let’s turn the tables a bit, what sorts of things have you ever seen people in your audience do that annoys you?
LINE TRAPS: When people stand there and do NOTHING while watching a punk show is the most annoying thing to see. If you’re watching our band and we can’t even move you enough to bob your head…then go outside, we’re obviously wasting your time. I don’t know if it’s just the west coast, but I’ve seen way to many bands play in Victoria, Vancouver and even Seattle and Portland in recent years, where nobody is moving. I’d rather play for 6 people who clearly enjoy a live punk show…than 200 people standing there watching and taking the occasional picture with their cell phone.

I was reading this interview with a former drummer in The Cramps and he talked about how guarded Lux and Ivy were with their image, he said it was so bad that it almost imprisoned them.  Do you feel image is still an important aspect to being in a rock band these days?
LINE TRAPS: Some of the best bands had a carefully cultivated image. Then there were bands that rejected having an image, and their lack of image become their image. In the end, everyone is going to see you as something different than everyone else. You can try to influence how people see you, or you can just be authentic, and hope that comes across. These days, if a band dresses or acts differently on stage than they do in “real life”, I’m probably not going to like that band.

Where can people log on or go to buy your records?
LINE TRAPS: People can hit up our Bandcamp page here:
https://linetraps.bandcamp.com/
Or just find us on Facebook and send us a message…we have like 30 different T-shirt designs too…
https://www.facebook.com/linetrapsvic 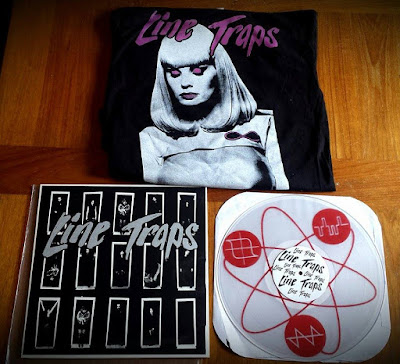 What lies ahead in the near future for Line Traps, any touring?
LINE TRAPS: We’ll be recording new material in the next couple months…probably for the second LP. Probably a short trip down the coast sometime soon, but two of us have young kids…so that makes any real “touring” kinda outa the question.

Posted by Audio Ammunition at 5:16 AM