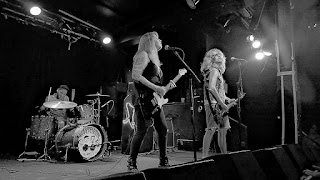 The first time I heard Lisa Doll & the Rock n Roll Romance they were opening up for my favorite local band Scorpion Vs Tarantula here in Phoenix, AZ. They were a long way from their hometown of Baltimore, MD and still they kept up with the mighty SVT, which if you don’t know, is no easy thing to do. I immediately got the impression that this was not merely the name of a band but lead singer/songwriter/gunslinger Lisa Marie Doll’s way of life. The infatuation and passion she has for the music is evidenced in her songwriting. Threads of traditional rock n’ roll themes, New York brash n’ trash and power pop flash are all woven throughout her Neon Heat EP, which came out a couple of years ago. Bands like Lisa Doll & the Rock n Roll Romance don’t burn out or fade away they keep rock n’ roll alive out there, somewhere until their dying day.

Let’s start out by telling me who is currently in the band and how you all met and decided to play music together:
LISA: It’s my music with a backing band which tends to rotate different people depending on their availability and life happenings. Not everyone is the touring type and don’t realize that till they go on one. I hope to one day have a consistent line up. Andrew has been involved since day one and the only one who has continued to stick around. He plays drums on the recordings but has been shifted around to bass and 2nd guitar depending on what’s needed live. We met years ago, when I answered a bands’ Craigslist ad looking for “a guitarist that’s into bands like The Cramps and 70’s style punk.” He was playing drums for them. The band never played live much but it gave me the confidence to perform my own music and when it disbanded I asked Andrew to join my Rock n Roll Romance project.

Can you remember what band or musician first inspired you to want to pick up an instrument and learn to play and write music?
LISA: When I was a preteen I was exposed to Green Day, Nirvana, Hole, and The Ramones. From there I matured to really dig Rocket From the Crypt, The Pixies, and The Marked Men and garage rock in general. The combination of all that and many more bands is what got me really wanting to pick up my own guitar. All these bands are very rhythm based in their guitar playing which is what I gravitate towards. I really suck at playing lead live. It feels like a different part of my brain has to clink in and out to do it.

The band did a video for the song “Don’t Wanna Break Up” that’s off of your Neon Heat 7” on Chucks Records. From the looks of it, it seems like it was fun to do.  Can you tell me a bit about your experiences making it?
LISA: Like most bands our budget is $0 for music videos, so DIY was it. I wanted to do a quirky but dark video kind of like Weekend at Bernie’s style. The idea is I can’t accept the obvious end of my relationship to the extent where my delusion involves me puppeteering his dead body about and even invoking the powers of dark magic and the electricity of rock n’ roll to resurrect him. Andrew and I took turns filming and setting things up and had lots of fun with it. 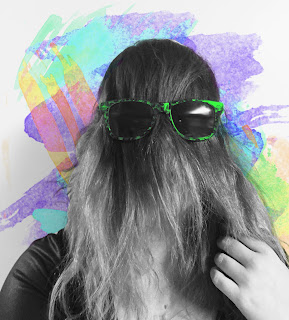 The band is currently based in Baltimore, MD. What is it like for a band like yours playing live out there? Is there a supportive “scene” that gets what you’re doing musically?
LISA: Baltimore is okay. I prefer to play out of town. I feel I get a better response and comradery from out of state peers. There is a very small Baltimore scene for rock n’ roll and garage punk and definitely some awesome people, but they are all in bands themselves which doesn’t leave much for a crowd.

Lisa, tell me a bit about your comic Free Candy, and how you got started doing tattoo art:
LISA: My comic Free Candy is totally on the back burner right now! I really hope to start it up and make more issues. It’s difficult because it’s semi-autobiographical and based on my experiences, misadventures, and people I’ve met. I need an editor and someone to help me focus on where to go next. I’ve been through a lot of craziness and I need a cathartic way to get it all out. The comic kind of rubs people’s noses in their shit with a comedic angle. It covers relationships, being in a band, and the pirate-like world of tattooing.
I started tattooing in 2011 and basically forced my way in. I took a lot of tattoo seminars, and started working at the bottom at shops in bad areas where I continued to learn what to do and NOT to do from co-workers. I wanted a traditional apprenticeship but wasn’t able to get one, but I wasn’t going to let that stop me. If you tell me “no” I’m just going to try harder.

Do you ever get tired of the Ramones and Nikki Corvette comparisons? I’ve been reading some of the press you’ve gotten and it seems most of them mention one or both of those. How would you describe your band’s sound to someone that’s never heard you before?
LISA: Yes, actually! Those are both amazing bands to be compared to don’t get me wrong and when the first press said it, I was extremely flattered! But they came out years ago so now when I see that comparison, it just means someone didn’t do their homework and just gobbled up other reviews and then barfed them back out. I think it’s just an easy thing for them to go to without having to really take the time to listen and form their own opinion. Early on, Razorcake mentioned my demo harked of Marked Men as an influence and I was super stoked because to me that meant he was really listening, more so then I think the average person would. He was able to sniff out a buried affection that I didn’t think was obvious at all.

We’ve come to the segment of the interview that I like to call “four questions I stole from other interviews.” You may elaborate on the following four questions as much or as little as you see fit.  Let’s begin:

1.     What’s the first concert you attended without your parents?
LISA: A local community center show in my hometown with local high school bands.

3.     What was the first band picture or band poster you had pinned up on your childhood bedroom wall?
LISA: I think Nirvana as well he, he.

4. Name the first record you picked out and purchased with your own money:
LISA: Oh geez, I have no clue what the first one was. I believe it was Green Day’s Dookie.

Where are the best places that people can log on or go to hear or purchase you music?
-www.lisadollrocknrollromance.bandcamp.com
-Itunes
-or Youtube

What lies ahead in the near future for Lisa Doll and The Rock n Roll Romance?
LISA: I have been working on new music for the last couple months. I’m really excited about the new stuff and can’t wait to get it out there! I’m hoping to attract some label attention. We’ll be sure to go on tour again as well!

Posted by Audio Ammunition at 7:35 PM