Impo and The Tents 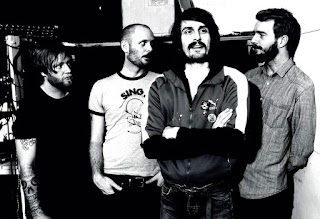 Impo and The Tents play some of the catchiest, most endearing rock n’ roll music floating around today. When I first dropped their 2nd LP, my pick for 2014’s album of the year; the fantastic Peek After a Poke available from Alien Snatch Records, I thanked the maker that someone still found interest in power pop influenced punk bands from the late ‘70’s and took them seriously for that matter! These Swedes crank out short, dizzyingly catchy bursts of candy coated audio razor blades. Two minute songs that are fast and fun to listen to that don’t seem like they’d be all that difficult to write and perform, right? Wrong, wrong you are so very wrong!  It is a fine line to walk the way bands of old walked without seeming like you’re following too close step by step, and to add your own influences and cut them into a timeless sound that still rings with the bells of yesterday and yet still sounds fresh and contemporary.  It’s not an easy job but Impo and The Tents pull it off and make it sound like it is.

Let’s start by telling me who is currently in the band and what everyone does in Impo and The Tents:
Rune: Vocals & Bass
Dan: Guitar (also answering the questions)
Lars: Organ
Victor: Drums

How did you all meet and decide to play in a band together?
DAN: Me and Rune are childhood buddies and played in other bands before starting Impo & the Tents in 2010. We were supposed to do a 7” as a one off thing, since we were engaged in another band at the time, but things kinda snowballed and I&TT became our main focus. Victor replaced Sanna on drums and Lars replaced Martin on organ. Anders has filled in on drums on two tours.

What band or musician influenced you to want to play/write music?
DAN: There´s a long and a short answer to that question, and since the long answer is really long, I´ll just go ahead and say Appetite for Destruction. That record changed everything. Made me interested in playing an instrument, thieving booze from my parent’s liquor cabinet, secretly smoking in the forest, growing my hair long and cutting holes in my jeans.

How would you describe what your band sounds like to someone that’s never heard you guys before?
DAN: Imagine a Beatles song played at double speed, with the gain cranked up on the amps and some delightfully squeaky vocals on top. We are obviously very influenced by ‘70´s power pop/melodic punk. Reviewers often compare us to Dickies and Undertones.

The band is currently based in the town of Södertälje, Sweden. What is it like playing shows there? Are there people there and other bands that support and understand what you guys are doing musically?
DAN: Both Rune and I are from Södertälje, but we have moved a long time ago. We are based in Stockholm now and part of a ”scene” loosely based around Push My Buttons, who arrange gigs and run a record store/label. Everybody does their own thing and has their own sound, which I think is great. It´s more like a gathering of (sort of) likeminded freaks. I have put out two compilations with contemporary Swedish garage and punk bands on my label Ooga Tjacka Tapes, that you can check out here:
https://oogatjackatapes.bandcamp.com/album/pickled-herring-punk

You guys list the Beatles, Raspberries, Big Star, The Nerves, The Shivvers, Ramones, Dickies, Undertones, The Gizmos, and the Real Kids as your main influences; bands that existed and were in their prime long ago.  Are there any current bands that inspire you?
DAN: I mainly look to old stuff for inspiration and especially love discovering old obscure power pop 7”s. As for contemporary bands in the same vein as us, we like Nobunny, Reigning Sounds and King Khan & Bbq Show, whom we have had the pleasure of opening for when they played in Sweden. Home Blitz is fantastic. Sheer Mag is a cool new band. Baby Shakes. Local heroes Bäddat För Trubbel of course. Perfect Fits released two criminally underrated power pop 7”s in 2008 (one was a split with Twinkle van Winkle, also great). 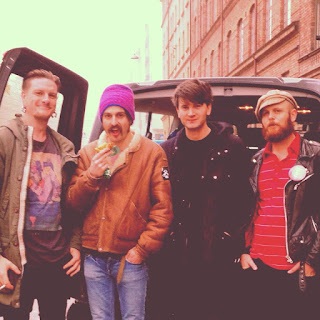 You guys put a lot of humor in your songs and records; it’s even in the band’s name. Is this important for you guys to do? Could you ever see Impo and the Tents doing a social or political song like the Ramones did with “Bonzo Goes to Bitburg”?
DAN: Sometimes too much it seems, since some people aren´t able to see past it. The band name especially has shown to be a turn-off for some people ha, ha! We´re pretty serious about our tunes but pretty unserious about the rest. It´s not important to be funny, but it´s important to keep the music playful and not take yourself too seriously. I think politics have no place in music.

You guys have toured Europe quite a bit.  Can you tell me about the most memorable show you can remember playing, good or bad and what made it so unforgettable?
DAN: I don´t know where to start, but let me say it´s more like the movie about Anvil, and less like the book The Dirt. It´s fun, chaotic and blurry. You get a great knowledge of Autobahn!

If you were stuck on a desert island with (A) one record, (B) one meal and (C) one person, what would they be?
DAN: (A) Velvet Underground - S/T (B) Vegetarian meze buffé (C) Maggie Gyllenhaal

What lies ahead in 2015 for Impo and the Tents?
DAN: New 4 track EP to be released on Alien Snatch at the end of the summer! It´s called Anxious Times and we are very happy with it! It´s a natural development from our recent LP ”Peek After A Poke” in style, but with a bit more punch in the production.