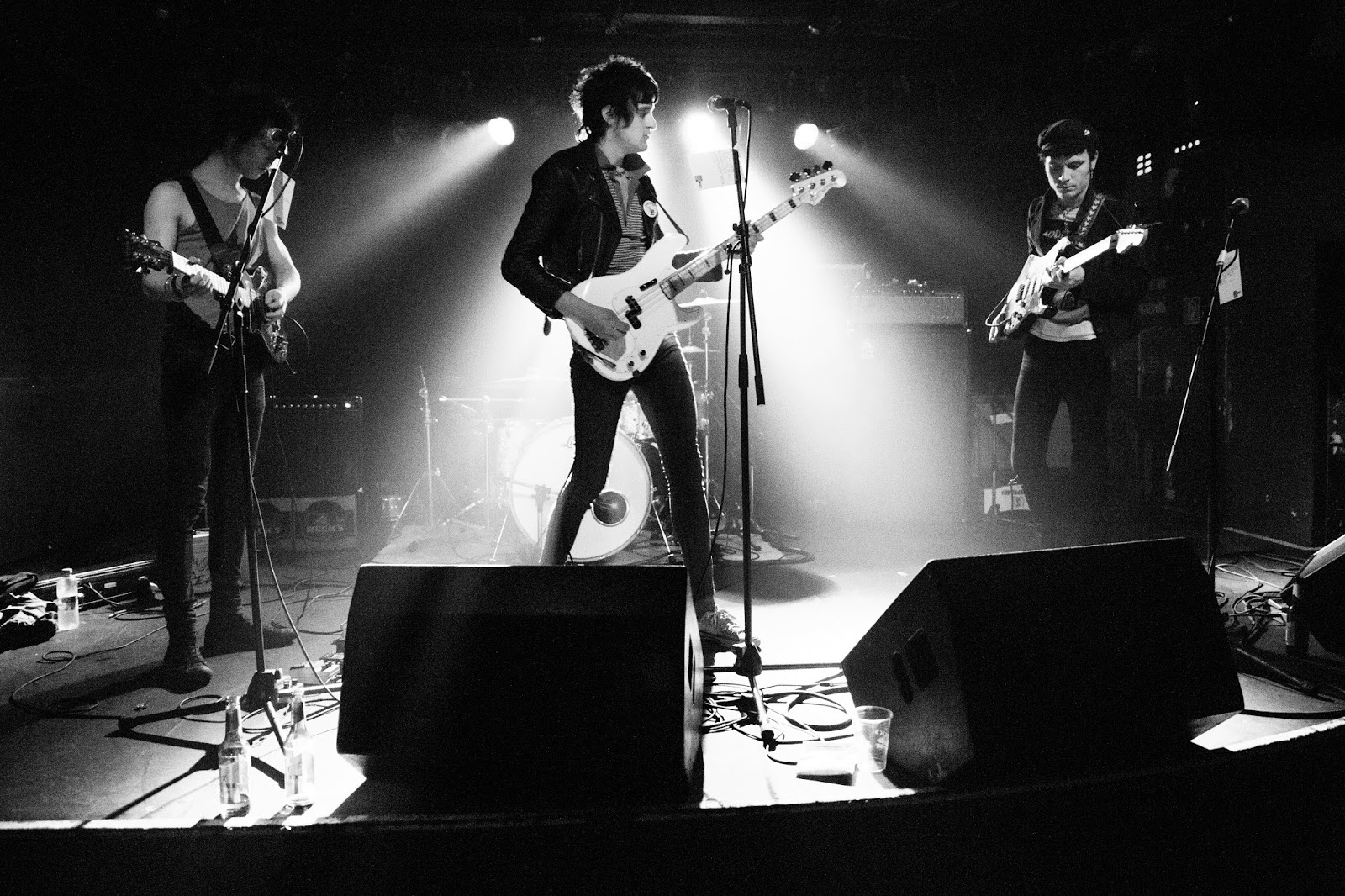 Any ignorant fool that utters the words “punk is dead” needs to pick his ignorant ass up off the couch and direct his/her attention towards Berlin, Germany. It’s a land of culture, politics, science, and top-notch punk rock! This is the city where Modern Pets dwell. This band relentlessly hurls snarling, anxiety filled ‘77 style punk rock similar to bands like The Gaggers (R.I.P.) and American groups like The Stitches and The Briefs.  It’s fast, snotty, and the songs are driven in and pierce your eardrum just right, to ensure maximum pogo-bility. Modern Pets have been at their game and perfecting their craft for years now, releasing a number or EP’s and LP’s on various labels. Once you hear them you’re gonna want to gather them all and realize playing Modern Pets records at maximum volume is mandatory!

Let’s start off with introductions, who’s all in Modern Pets and what do they do in the group?
JAN: Its Axel, Tobi, Alvar, and Jan. Bass, guitar, guitar, drums and we all sing. Everybody is writing songs that we arrange together in our practice room. I am doing the main part of the organizing, Tobi and Axel do a lot of the recordings and help with organizing too and Alvar looks really good!

The band is currently based out of Berlin, Germany. Germany has a history of great punk bands back in the day, The Razors, PVC, The Pack just to name a few.  What’s it like there now, are people pretty receptive to what you guys are doing musically?
JAN: To be honest – All the bands you are mentioning are ok, but not our favorites if it comes to German Punk from back in the day. We´re more into The Buttocks, Neurotic Arseholes, A+P, Schleimkeim, Abwärts, Betoncombo, Chaos Z and the likes. Anyways, nowadays the most German Punk/Deutschpunk is really shitty if you compare it to the ‘80s or early ‘90’s, it actually pretty much sucks! The scene, especially in Berlin, totally changed, Berlin is a really international city and you have all kinds of influences and languages from all over the world. So nowadays you find all kinds of different subgenres of Punk in here: from UK influenced HC, American garage to Spanish post punk and back. The scene still is a much more political one than in the US for example as its roots are deeply connected with the squatting and antifascist movement. It’s also still really big, at least in Berlin and still you find loads of different venues and places to go if you are into Punk and anything related. To me it seems an active and vital movement. Getting back to your question: yes, people are and always were receptive to what we were/are doing, as most of them at least partly understand where our influences are coming from (people in the US seem to understand that way better though).

You guys toured Japan in 2014, how did that go? Was it your first time there?
JAN: We got invited to do a tour there together with The Kidnappers from Hamburg and Your Pest Band from Tokyo. The tour's been absolutely great and was a really special experience! None of us have been there before ever, but we all hope we can do it again someday!

Speaking of playing live, what has been the most memorable Modern Pets show, good or bad that you can remember?  Where was it and what made it so unforgettable?
JAN: That´s a really hard question, maybe the one in the end of a 40 show European tour in 2013 where we were punching each other on stage in Gothenburg/Sweden, a really bad memory though. Still we learned something out of it I guess and it was a great show for the audience! 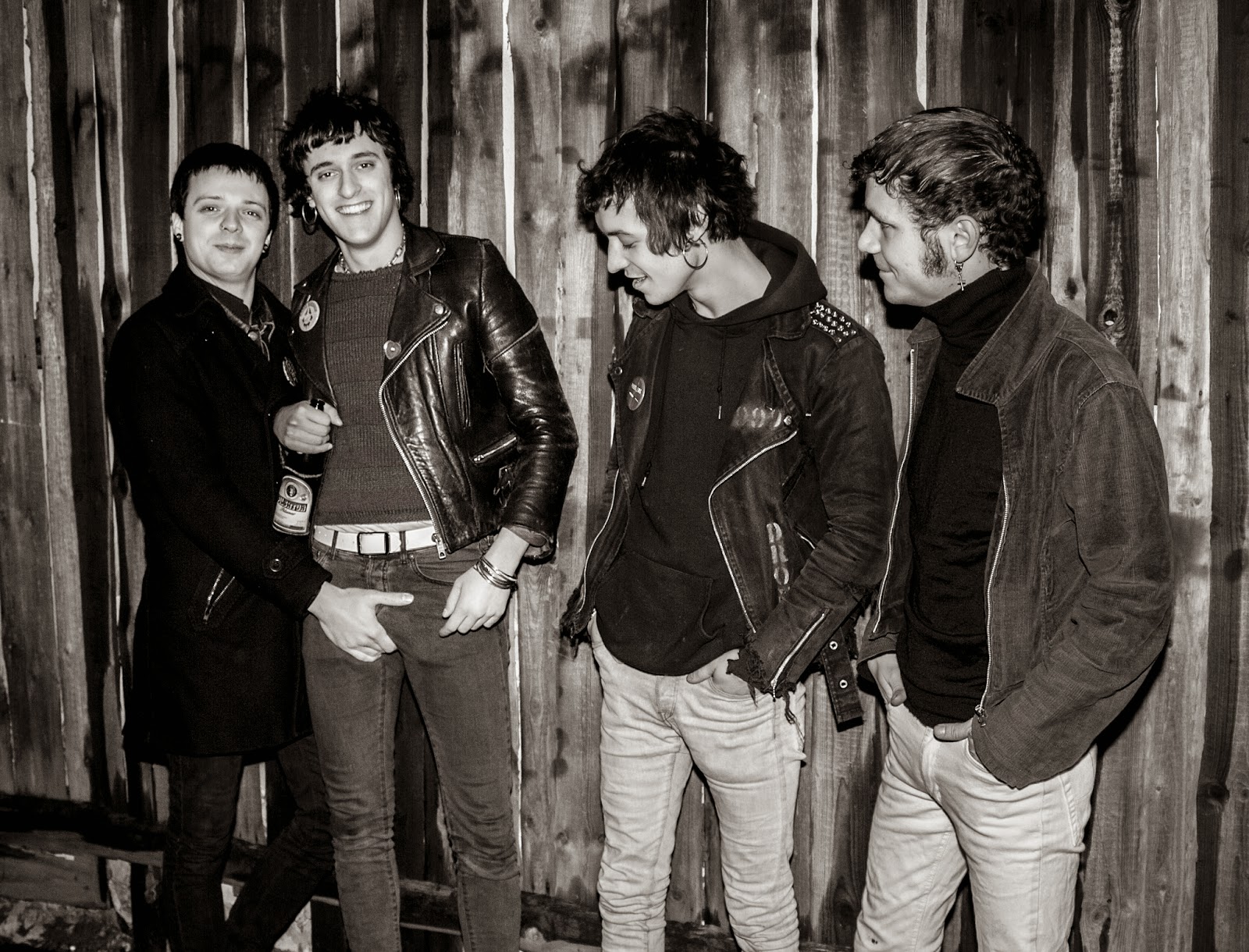 When you guys are up there playing in front of an audience, what distracts you most?  What kinds of things annoy you that you see people doing during your gigs?
JAN: As we´re having a pretty solid experience in playing live I think it’s kinda hard to distract us from the outside. A bad monitor/stage sound is always something that sucks and kinda makes you feel uncomfortable playing, but that´s how it goes sometimes. What really annoys me are stupid people in the audience; people that dance too violent or disrespect others, smaller people with their acting and moving and also people who seem like totally not interested in what you are doing. I don´t get how you can pay money to enter a show and then just stand around and shake your head and build a semi circle in front of the stage. Luckily we don´t have any of these types in our audiences too often.

You guys have released a number of records on a bunch of different record labels including Modern Action and Secret Mission here in the U.S.  How did you hook up with these guys on a different continent?
JAN: They got in touch with us and asked if we wanna release something with them. Both labels are run by amazing people and we really like what they are doing, so we're really happy about that.

Do you remember as a kid, who made you want to pick up and learn to play an instrument?
JAN: As far as I can say, I started playing drums in the early ‘90’s, it was definitely Guns n’ Roses when I was an 8 year old kid. I know that´s a bit awkward, but they definitely were the first rock n’ roll band that I was ever listening to and had a big impact on me at least for 2 years. And of course when I was 13 and started to listen to punk I always denied that I ever listened to them, he, he. But yeah, if it comes to punk it was maybe popular bands like Green Day, Nirvana, Offspring, Die Ärzte and Die Toten Hosen, Bad Religion that first touched me and then later on bands like Slime, Spermbirds, Black Flag, Crass, Discharge and Minor Threat as well as a whole bunch of popular ‘90’s Deutschpunk like Wizo or Hammerhead that got me deeper into it and really made me play what I´m doing today at least kind of. That’s excluding all the much more specific ‘70’s punk, power-pop, Beat and HC stuff that I got in touch with later that clearly had an of an effect on what we are doing with Modern Pets now. Tobi and Axel are both about 5/6 years younger than me, so for them it must have been quite different and Alvar is my age – we have a couple of similarities, but he´s from Spain, so there´s loads of local differences too.

Do you remember where you were and who first introduced you to punk music?  Tell me a bit about that, can you remember what record or song it was?
JAN: It was my uncle, it was on the south German countryside in a village called Sülzbach (that´s close to Stuttgart), it was in the mid ‘90’s and it definitely was “A Texas Cowboy” from the Spermbirds. I remember jumping around my uncle’s room (he is really young and by that time he was still living with my grandparents) together with my sister while we were listening to it.... Good times! When you aren’t playing or listening to music, what other sorts of thing do you enjoy doing, any non-musical hobbies or interests?
JAN: Music is definitely the thing for all of us. Every one of us is at least playing in 2 bands at the moment, so as sad as it is, I think all of us are spending most of our time listening and playing music as well as organizing shows for other bands or putting out tapes. If I don´t do that I´m reading a lot, doing a bit of sports, watching movies and smoking pot with my housemate. I think I can more or less speak for all of us that this pretty much sums it up, if you ask me what we are doing. Some of us are also recording bands or DJ-ing, man maybe I should change something in my life he, he.

Where can people go to, or log on to, to listen or buy your music?
JAN: Hopefully your local punk record store, definitely our live shows and at our labels, Secret Mission Records, Modern Action Records, Dead Beat Records in the US; P.Trash, Concrete Jungle Records, Rockstar Records, This Charming Man Records in Europe and Black Hole Records in Japan. We also have a Bandcamp site with almost all the releases we did so far. You can download there for free or at least listen to the stuff. Its modernpets1.bandcamp.com

What lies ahead in the near future for Modern Pets?
JAN: We're pretty much focusing on working on new songs at the moment that might end up on another record one day and we'll tour Eastern Europe this year for the first time as well as some smaller weekend things in Spain, the UK and of course Germany and then hopefully the US again in late 2015 or next year.

Posted by Audio Ammunition at 2:54 PM