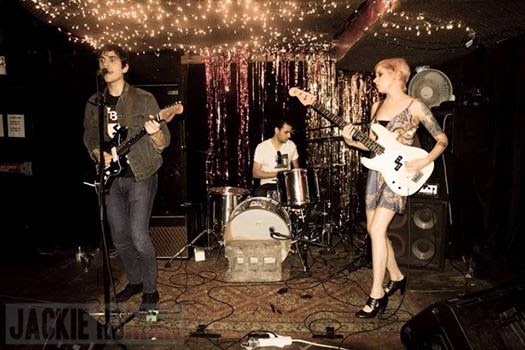 In the short time they’ve been together, Low Doses have already molded a unique sound for themselves. It’s like they’ve taken hardy bites of New York’s heroin smeared, tight leather jacketed rock n’ roll swagger from the Thunders/Bators/Vincent class of the late ‘70’s, popped pills crammed with mid ‘60’s UK mod/beat like early Who and Small Faces and chased those pills with a shot of American garage frenzy similar to The Sonics.  The songs have a foundation poured with unforgettable melodies that quickly set in your brain; they’re framed in thick, sturdy guitar chords and coated with zesty tempos that command your attention. These East Coast city dwellers effortlessly blur the lines of garage and power-pop, and they’re just getting started on us!

Let’s start by telling me who’s currently in the band and what you all do in The Low Doses:
Right now we’ve got Ryan Masterson on guitar and vocals, Joi La Cour on Bass, and a rotating cast of drummers. We started the band with Vin Russoniello, and he plays drums on most of our recordings.

How did you meet and decide to play music together?
RYAN: We’ve all pretty much known each other since high school. Vin and I played in a band together back then, and our best friend had a hopeless crush on Joi, so we knew her that way. Vin and I reconnected in 2013 and started the Low Doses, and then I ran into Joi at the music store where she was working. I didn’t have the balls to ask her on a date, so I asked her to play bass with us and she totally fell for it!

JOI: I was in Livids (R.I.P.) at the time, but I thought he was hot so I said yeah and gave him my email address. It took him like 6 months to actually send me a song, but when he finally did I really liked it and so I started playing with them when Livids broke up.

Who do you feel had the biggest influence on you musically and please tell me about the first time you heard this band/musician:
RYAN: I’d have to say my biggest influence as a guitar player is Johnny Thunders and as a songwriter: Ray Davies and Paul Collins. The first time I heard the New York Dolls was in high school and something definitely clicked inside my head. I don’t think I fully understood it at the time though. I mean, I spent a lot more time listening to the usual teenage classic rock shit before I understood where the Dolls were coming from and what made them so exciting. Eventually I got into more of the bands that they influenced and were influenced by and I think that has really helped shape our sound.

As for the other two--well, who can remember the first time they heard the Kinks? And the first time I heard the Nerves I definitely had the feeling that they were pretty much made to suit my exact musical tastes. I wished that I wrote every one of their songs.

JOI:  I’ve been a ‘60’s rock n’ roll girl pretty much since birth, but by the time I started playing bass I was basically into mostly punk, which is lucky because I had no formal musical training. The Libertines inspired me to take my playing a bit more seriously and though I learned how to play guitar by mimicking those guys, I ended up in a fast n’ dirty punk band called Livids with ex-New Bomb Turks singer Eric Davidson. I think the Kinks are our mutual heroes and our love of those songs is our tightest musical bond.

The Low Doses are currently based in New York and New Jersey. Is it tough being in a band and living in such a huge city with so much going on every night?
RYAN: Yeah, for sure. Everything in New York is so competitive. I couldn’t even get a job as a fucking waiter when I first moved here and I grew up working in restaurants. Also, I live in New York right now but Joi lives back in our hometown of Trenton so we’re sorta caught between two places. But back in Jersey there’s not much going on in the way of our style of music so we don’t find ourselves playing there too often. There’s mostly just a market for Bon Jovi covers.

JOI: To be fair, they’re starting to throw a lot of Nickelback in the mix… 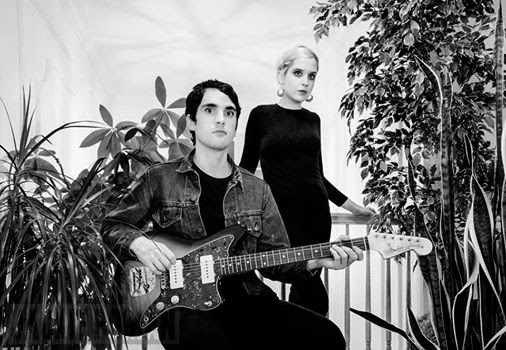 You guys recently made a video for the song “You’re Gonna Lose.” Tell me a bit about it if you will?
JOI: My best friend since childhood, Jackie Roman, approached us about making a video that she had already conjured up in her head. She wanted to play out scenes from the works of the photographer Duane Michals and use footage that she had taken while riding on trains throughout the NJ/NY area. All we had to do was show up and let Jackie work her magic. We were really stoked to see the final product!

I recently read an article about music videos still being relevant despite MTV pretty much no longer showing them. Why do you think their popularity remains?
RYAN: Hmm. I’ve never really thought about it, but I guess since everyone is walking around with a video camera on their phone and with YouTube and so many other platforms available to share them, it just makes sense that bands are gonna continue to make them so yeah, technology.

JOI: We don’t fancy ourselves internet/technology savvy folks, but hey, if you can’t beat ‘em, join ‘em. Also, they can be a lot of fun and interesting in their own right. Just look at what Jackie did with ours!

On your Facebook page you list the 1960’s and 1970’s as influences. Are there any current bands that you enjoy listening to and find inspiration in?
RYAN: Uhh, Jan Terri’s still making music, isn’t she??? But seriously, yeah, there are plenty of current bands I enjoy listening to. I was checking out your 2014 top ten lists earlier, and I love so many of the bands you guys covered. You know, stuff like Dino’s Boys and Barreracudas. But I don’t really use newer bands for source material or inspiration. If anything, I’ll go back in time further to generate songwriting ideas.

What sorts of things influence your song lyrics? Are there any particular topics you purposely stay away from, if so why?
RYAN: Well they say write what you know right? So I write about drugs and girls, naturally. I enjoy staying within the usual bounds of rock and roll lyrics. There aren’t any topics I shy away from but I try to keep things simple and try not to make any “statements” or anything like that. I’m not a good enough writer so it doesn’t come off well if I try to make things too serious. But I really wish I could be one of those songwriters who make pointed social observations, like Ray Davies or Paul Weller, ha ha.

When you play in front of an audience, what sort of feeling or sentiment do you hope to convey to an audience that hopefully they will walk away with?
RYAN: We really just want our shows to be fun and we strive to hold people’s attention. If I look out and see a bunch of people checking their Facebook, then I know we’re doing something wrong.

JOI: Yeah, we just don’t want anyone to walk away, ya know, during the set.

I always hear golfers say how many “life lessons” can be learned from playing golf.  What sorts of “life lessons” do you feel people learn from being in a band?
RYAN: I definitely wasn’t expecting to see any golf related questions, ha ha. I prefer to get my life lessons from baseball. I’m a Mets fan, so I’ve learned to dream big and achieve small. Being in a band is kinda the same I guess.

What’s the best piece of advice anyone has ever given you?
RYAN: Don’t date your bandmate…whoops.

JOI: Don’t wear that on stage.

What’s in store for the Low Doses in 2015?
We just recorded some songs at Volume IV studios in New Brunswick, NJ, two of which will be coming out on 7” this spring. We’d really like to go back there make an LP later this year if we can and we’re gonna make another video, this time for our song “Bathroom Stall.” But mostly we’re just focusing getting all of our band members living in one place so we can play out more regularly. Definitely look for us to be playing in the New York area a lot this summer.

Posted by Audio Ammunition at 2:38 PM