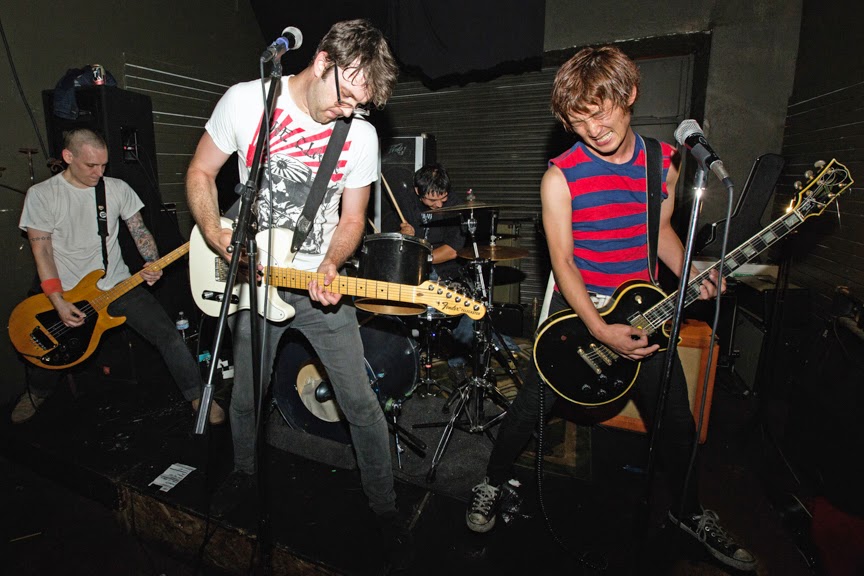 Ever hear some tired old morons making fools of themselves droning on that punk rock isn’t the same as it was back in the old days? Well those boring geezers are right, in a lot of ways it’s better now! Folks that start punk bands nowadays have the benefit of chipping away at bits of different scenes from decades of recorded history. Take Los Angeles’ Rough Kids, they add their own unique zest to an already volatile mixture of punk rock and it makes for a distinct explosive mechanism with a blast force capable of permanently etching the shadows of the people in their audience on to the surrounding walls. Punk rock may not ever save the world but it can help tear it down so we can build a new one on its ashes and Rough Kids makes the perfect demolition device.

Please tell me who’s in the band and what you all do to keep Rough Kids the toughest gang on the block:
LUIS: drums
PAUL: bass
TSUBASA - lead guitar/vocals
ETHAN - vocals/rhythm guitar
3 out of four of us unabashedly change diapers and take naps. That's pretty tough, right?

Can you tell me how you all met and decided to play music together?
ETHAN: I met Tsubasa about 10 years ago when I was playing in a band in San Francisco and he had a band in LA. When I moved back down to LA in 2007, I wanted to put a new band together and Tsubasa and his drummer weren't doing much at the time, so we started Rough Kids. It has pretty much been a rotating rhythm section since then. We've gone through 4 bassists and 2 drummers to find Paul and Luis who have become crucial members of this band.

LUIS: I met Tsubasa at the Echoplex about 3 or 4 years ago. I forgot who I was there to see, maybe The Gories. We were introduced by an ex-girlfriend of mine. Long story short, he asked me to be in the band late last year. I had just gotten back from a tour with Sonny Vincent. I immediately said yes and I met Ethan and Paul at our first practice.

When writing songs, do you have any band or songwriter in mind or do you guys just let the chips fall where they may and write what comes to mind?
ETHAN: On the last record, I think you can tell that a lot of the songs were written at different times while listening to different things. It's a bit of a compilation of us figuring out what exactly we wanted to do, single track minded and lacking any cohesive through line. We're recording the next LP right now and it was definitely written with "album" in mind. For me, there are some specific bands/songwriters that are more influential on me than others, but anytime I've sat down and tried to "write a song like (insert name here)" it never works. I find it's best to just let the chips fall and sometimes, later, I might realize where this verse or that chorus came from. Even a song like "Into the '00s" was written not realizing I'd blatantly bitten the riff from "Civilization's Dying," allowing me to write a completely different vocal melody which resulted in a song that is (hopefully) still interesting and different enough for listeners to detach from the Zero Boys.

TSUBASA: I never try to write songs like some bands...When I write songs, I always make sure the song doesn't sound too similar to whatever songs I've heard before...Of course all my songs have an essence of all my favorite bands or songwriters but I try not to rip off anything.

What sorts of things typically inspire your song lyrics?
ETHAN: The lyrics usually don't get properly written until it's time to record. Choruses and themes work themselves out at practices and then I panic before we go into the studio and fill in all the blanks. The songs can really be about anything. They’ve ranged from songs about friends’ relationships with their girlfriends, historical serial killers, apathy, movies, etc. I've never put much stock in song lyrics. My goal is to write things without any sort of message, as I don't think music is the place for a soapbox, while still attempting to sound more intelligent than simple nursery rhymes. I hate when a band writes one verse and a chorus and repeats it over and over. I'm way behind on the lyrics for the new record and am considering having a buddy of mine help write some stuff.

Do you remember how or who first introduced you to punk rock?
ETHAN: Aside from Green Day, Rancid and Bad Religion popping up on MTV in ’94-‘95, I'd have to give credit to my junior high friends Wade and Steve, who gave me tapes of things like Operation Ivy, Social Distortion, The Dickies, etc, it’s just been a dive deeper and deeper into the rabbit hole since then.

TSUBASA: I grew up in the southern part of Japan and there wasn’t a real punk scene in my hometown but there was this awesome band called "Nervousbreakdown." I was lucky enough to meet them and catch their gigs in my teenage years. They introduced me to great stuff such as The Dictators, The Real Kids, DMZ, Nervous Eaters, The Devil Dogs, Teengenerate, the list goes on.

PAUL: I got into punk from growing up watching skate videos. Started listening to the basics like Dead Kennedys and Ramones and then when I was 13 my older sister was dating a dude who was into straight edge hardcore, so I started going to shows with him.  That was when I really found and fell in love with the world of DIY punk and hardcore.

LUIS: It was the last day of the end of my freshman year. I smoked herb for the first time. Went over to my homie’s pad and he played me Nirvana. That was it and that was when I decided to be a drummer. 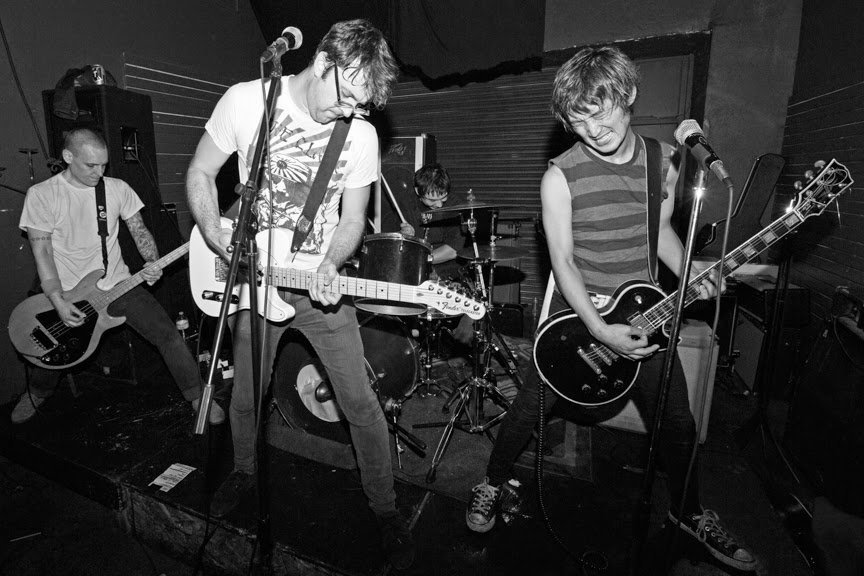 In your experience, what are some of the best things and worst things about being in a band in a huge city like Los Angeles?
ETHAN: We’ve been asked this question in just about every interview and it’s gets more difficult to answer each time. The blessing and the curse of LA is that it is so large and there are so many people. What’s unfortunate is how few places there are to play. It’s mostly 21+ bars, or venues that last a couple months and fizzle out due to lack of permits or whatever.

TSUBASA: One of the biggest obstacles for a band like ours is that LA is a clique-y town and we've never fit in with the garage/pop churned out by the Burger bands or the art/noise punk scene, which seem to be the biggest draws these days. With so many shows going on every night, unless your show is the hippest place to be, attendance can be pretty bleak. I’m also worried it’s getting to a point where a lot of people aren’t really going out to the shows to hear the live music, but rather just to be where the best party is. I’ve literally seen more people dancing to the music between bands at shows than during the bands.

LUIS: It is pretty clique-ish around here but I find a lot more bands trying to unify each other. I mean, we have a lot of bands that suck, but we have a handful of really good ones. As for the people that try to find the best party and not the best lineup, there aren't enough of them for me to give a rat’s ass about. They're young and dumb. Welcome to America.

TSUBASA: Who gives a shit about what that pussy said?

LUIS: I'd rather be in a reggae band surrounded by weed. Bruce is lame. There are punks who like some of Maiden’s stuff. Or at least when Paul Di’Anno was in it. Bruce should just do what he's always wanted to do: Opera.

In a deleted scene from the movie Pulp Fiction, Mrs. Mia Wallace told Vincent Vega,  “That no one can like The Beatles or Elvis equally. You can like them both, but no one likes them the same.” I feel there are few other bands/musicians like that. Tell me which you guys prefer and add comment if you’d like:
1. Elvis vs Chuck Berry:
ETHAN: Chuck overall, but Elvis had the best one-off with "Suspicious Minds."
TSUBASA: Chuck Berry all the way! Great songwriter, invented the most important guitar style that has been inherited by all my favorite musicians.
PAUL: Elvis
LUIS: Chuck. He's pretty much God in my eyes.

3. The Clash vs. The Sex Pistols:
ETHAN: Sex Pistols. Best album ever written end to end.
TSUBASA: I love The Clash but yeah, nothing can beat "Never Mind The Bollocks"
PAUL: The Clash
LUIS: Sex Pistols

5. The Stitches vs. U.S. Bombs:
ETHAN: Carbonas! No offense, but neither of those bands is going to be remembered 20 years from now, just as ours isn't.
TSUBASA: I like Carbonas better than those bands too, but I never liked U.S Bombs so The Stitches all the way!
PAUL: Completely agree with Ethan.
LUIS: The Stitches.


Posted by Audio Ammunition at 5:01 PM